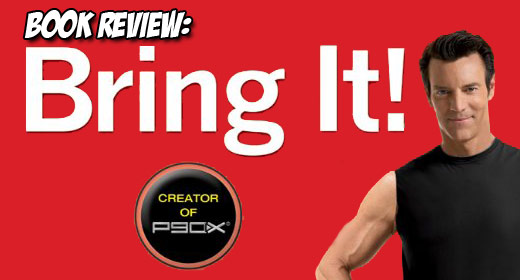 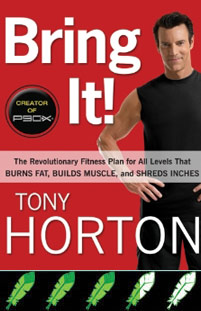 To say I’m a huge fan of Tony Horton is a colossal understatement.  I practically owe the man my renewed health after a doctor told me about ten years ago that my body was going down the crapper.   Since then I changed my eating ways and began P90X.  At nearly forty, I’ve never been healthier.

That’s why this review is going to kind of hurt, because even though I feel a sense of gratitude, I’m also the sort of guy that doesn’t give anyone a free ride.  So for better or worse, I bring to you the review of Tony Horton’s book, “Bring It!”

Don’t misjudge me, “Bring It!” is not a bad book at all.  In fact, for those who are unfamiliar with P90X or Tony’s other video workout series, I would greatly recommend it as a starting point.  Perhaps this will be the catalyst to get them to put the Big Mac down and change their evil ways.

For example, there is a section on vitamins and nutrition…an all but ignored concept in personal fitness.  I appreciate that Tony takes no shortcuts and is adamant about nutrition being more important than the actual work out itself.  In fact, it was here that his faithful followers might find tidbits of fresh information.

The pages on fitness routines are also excellent for first timers.  For any Hortonites, just about all the moves are things that we’ve seen before in his video workouts.  These sections are best described as perhaps a documented manual.

What is lacking is Tony’s story.  Sure, it’s there in anecdotal places, but I want his real story.  You know what I mean, the stuff he alludes to in his One on One series for example.  I wanted to know what makes the man tick, and what drove him to go from a barely capable young athlete to America’s number one fitness trainer.  Those curious about the man himself will probably walk away not knowing much more than they did before.

To his credit, Tony does have a writing style that I did find rather humorous and you can almost feel the nature of the author coming through.  It just never takes advantage of its strong points to bridge the gap from entertaining to captivating.

Any P90X faithful will probably walk away with very little of anything completely new.   Much here is stuff seen many times before and heard from Tony in various ways.  But one must also consider this: the reason he says the same things so often is to possibly drive home a concept of fitness that actually works.  Maybe that’s why P90X has lasted this long.

“Bring It!” is good fitness reading.  But it’s probably not must-have reading.  Therefore I give this book an honorable 3.5 Feathers out of 5.