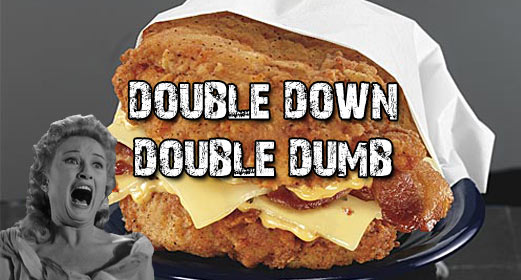 I love fast food coupons.  No, not using them…just looking at them.  Every franchise trying to peddle their small morsels of barely edible and chemically enhanced cancer causing sludge that they loosely refer to as “meat” is amusing to me.  As a kosher eating, hold the red-meat, gluten-free, pseudo-vegetarian I can’t say my body would accept that kind of “food” without a fight on the same level as Chuck Norris vs. Megatron.  But yesterday I got the coupon to beat all… 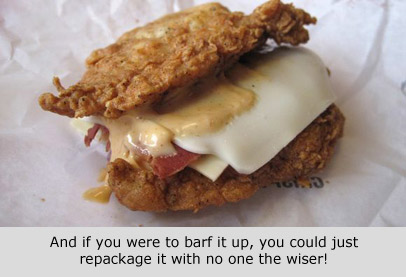 The KFC Double Down commits a felony against nature by squeezing bacon, processed cheese and “the Colonel’s we-want-you-to-die secret sauce” between two abominable slabs of fried chicken.  Jam packed in one sandwich is 540 calories, 32 g of fat, and 1380 mg of sodium that will take a lead pipe to your arteries like they owe you money, and enough meat to feed a small third-world village for a day.

But that’s not the stupid part.  Though it has been in Canada for less than two weeks, the company says by Sunday they will have sold more than 350,000 Double Downs across the country.

My homeland of Canada is not a heavily populated country compared to most.  We boast around 30 Million people which is about the population of a typical New Delhi shopping mall.  So that many grease-balls being sold in such a short time is actually an impressive number.

Fortunately, under pressure from UN Sanctions for crimes against humanity, the Double Down will only be on menus until Nov. 14.

So why make such an abomination?  One reason…to use the psychology of the masses to make money.

Food psychology for big corporations is fairly straight forward.  There’s the health end of the spectrum that appeals to customers good sense about their bodies.  And then there’s the bat-crap insane reverse psychology ad campaign that says a “real man” should eat a 16oz steak and wash it down with a glass of warm MSG flavored pork fat.

And the crazy thing is that so many buy into it.

I get asked all the time why I eat the way I do.  The answer is simple.  To keep as many doctors out of my butt as possible.  Literally.

There’s a million reasons to respect your body as a temple, but the chief among them trying to avoid colon cancer wherever possible by not having pounds of undigested, fermenting mystery-meat in the bowels and so much lard stuck in your arteries that it would give an adult bull-elephant a coronary embolism.

If you’re lucky, you’ll merely be having regular trips to the proctologist where horrifying instruments covered in KY jelly will begin blasting polyps off your colon.  All of this made worse by the doctor making laser gun noises like he was Luke Skywalker trying to blow up the Death Star by hitting an exhaust port only two meters wide.  No, you’re not in hell.  But it may be close.

The KFC Double Down is by no means the worst offender when it comes to fast food.  It is merely a sign of the times.  A sign that there will always be a large ( ha!! PUN! ) segment of the population that will dig their graves with their teeth while exhibiting the rabid intensity of a crystal meth addict shark waiting for the next surfer.

So the next time someone tells you to be a “real” man by skipping the veggies, ask them if they have a thing for colonoscopies and having their chest cavities split open like a turkey dinner to free some space in the arteries.

Then enjoy that organic quinoa salad with a smile.