The first supplement everyone thinks about when beginning a new workout program is protein and rightfully so.  If you want to gain muscle mass, then supplementing is a great way to speed things up.

Unprocessed options abound in the way of fish, poultry, dairy, meats, and the pinnacle of self-reliance, hunted game.  Before any urban pansies start banging foreheads on the desk, realize that hunting means me taking personal responsibility for my meat rather than pleading ignorance as where your burger came from.   Trust me, Bambi’s mom never knew what hit her.

Still, you have to admit it’s kind of inconvenient to fry up a moose steak after a workout.  Wouldn’t it be neat to have it in powdered form?  Well, hang onto your shaker-cups because there is no shortage of options.

If my hunting comment had you losing your marbles, then congratulations…soy protein is the powder for you.  Buyer beware though.  Rumor has it that a dose of soy protein will have the average man sporting knockers to rival Pamela Anderson before the shake hits bottom.

In the bodybuilding community, soy protein is avoided like it was laced with Anthrax due to evidence of increasing estrogen levels which I hear can make men lactate on par with Nubian goats.  Unfortunately, soy is in just about everything.  Protein bars, seasonings, powders, cereals…the list is endless.  Even whey protein isolate, the pinnacle of proteins, is almost always contaminated with soy lecithin.

This level of contamination it is probably a contributing factor to turning North American men into estrogen saturated betas.  Therefore, if you want to avoid soy all the way then be prepared to read labels…a lot.  Soy has your number and like a Terminator it will not rest until you are either dead or in a c-cup.

Odds are if that muscle-bound brute is chugging his protein shake after doing a 500lb bench-press, this is what’s in it.  Whey protein has been a favorite for decades of weight training due to being highly absorbable, having complete protein chains and generally digests well.  It also is relatively inexpensive so there’s not much to complain about.  Almost always they come in three flavors, vanilla, chocolate and strawberry.

Whey proteins come in two forms: concentrate and isolate.  Concentrate hovers around 80% protein while isolate is around 90%.  If price is a key factor, then using concentrate is perfectly fine unless you’re training for the Olympics.  Numbers that small are not going to change anything for the home fitness enthusiast.

Whey is a throw away byproduct of cheese-making and generally cheap and available anywhere.  That means the cost per serving is low while still being a superior product.  It’s the best of both worlds.  Well, unless you’re lactose intolerant I guess.   In that case you’ll be carving away at the ozone layer faster than a full grown Holstein.

Those silly vegans.  Always trying to find a loophole in the system.  Well the good news is that those coast dwelling deadbeats might be onto something as many vegan proteins are surprisingly able to compete.  Pea, alfalfa, hemp, pumpkin and other plant sources are mixed to provide complete acid chains.  Who knew such a thing was even possible.

I don’t want to come down too hard on veganism as a health choice as I’m sure someone out there is going to flip a wig if I do.  Go ahead and try the all-Skittles diet for all I care.  It’s just that the whole concept is just so first-world.  One must have it pretty good to possess the luxury of turning down a good steak.  Therefore, if this is a lifestyle choice you desire then fine.  But under no circumstances wave your finger at others because they don’t have your level of food budget.  If anything, people like that make guys like me want to go back to the BBQ for seconds.

All that aside, vegan proteins benefit from being highly absorbable, although not as much as whey or egg.  They do have one major downside and that is cost.  Expect to pay almost double compared to whey, which is strange.  I mean, it’s not like you have to take a carrot to the butcher shop.

Those convenient little pre-packaged protein balls that come from chicken butts are the gold standard to measure absorption by.  Manufactured from egg whites, egg protein is great for those who are lactose intolerant.  It also has A, B and D vitamins to round off the benefits.

Do be a little choosy.  There’s a real quality difference between factory farmed eggs and free range.  Farmed chicken-feed usually has very high soy content which as you men remember, will have you waking from a good night’s sleep armed with a frisky set of hooters.  What goes into the chicken goes into the egg, so try to get organic, free-range brands.

That’s not a play on words, this is quite literally ground up bugs.  Crickets are grown to a specific age, freeze dried and then ground into powder.  This is the new kid on the block and as weird as it sounds, it is probably one of the best.  It is almost identical to whey in protein composition while sporting vastly superior vitamin content, omega fatty acids, minerals and is kosher.   It also has a fraction the carbon footprint of whey so if you cry at night worrying about glaciers melting then give your conscience a foot-rub with some powdered vermin.

To anyone concerned about animal cruelty when it comes to insects, first know that I want to punch you so bad right now.  If you are one of these imbeciles, take comfort in knowing that much like yourself, crickets have absolutely no brains.  This is evident if you’ve spent five minutes watching them walk into water and drown because they are too mindless to simply walk out.  That is why they are fed water by a wet sponge.  Much like you and your misguided sympathies, they deserve to die.

Currently cricket protein will set you back more than all others but prices are expected to fall as adoption increases.  It’s also available in flour for creative baking.  And more good news, it doesn’t taste like bugs.

The hemp used for protein powders is also the same industrial hemp used for ropes and hats worn by insufferable twats.  No connection to the other stuff my old roommate hid under his pillow and tried to pass off as oregano.

Hemp protein has beneficial fats included although its protein content per portion is not as high as whey.  Hemp protein generally has the consistency of coarse sand so be sure to mix it good in something that discourages the particles dropping to the bottom.  Nothing fun about getting an unexpected clump of mud at the bottom of the cup.

The protein content of good old milk isn’t too shabby in its own right.  Whole milk can be upwards to 8g per cup.  If you look at a cereal label, you’ll quickly see it tells you how good their garbage is with milk added.  Alone, cereal has less nutrition than a sawdust pile.

Perhaps one of the best recovery drinks you can concoct is putting some cocoa powder and whipping up a decent chocolate milk.  Be sure to use real cocoa, not artificially flavored sugar powder.  In ten seconds you’ll get a glass of proteins, nutrients and a little taste to drive it home.  I’ve had as good results doing this than from expensive post-workout powders.

There are a few myths that still prevail.  Don’t buy into the persistent falsehood that milk will give you all the calcium you need.  Yes, it has lots in it, but not in a very absorbable form unless you happen to be a calf.  If it’s pasteurized…as all store milk is, then it would have even less absorbability.  However, should you seek out unpasteurized milk, be warned.  Depending where you live, some overreaching government agencies take a harder stance on it than drug trafficking.  Asking a farmer for some will get you a straight-faced denial of even having any as he and his family wipe the raw milk mustaches from their gloating faces.  Unless you know somebody who trusts you to keep your “city-boy” mouth shut, don’t waste your time asking.

On the other hand, if you have the resources to get your own cow, sheep or goat then you’re going to have access to a rare and wonderful commodity while sticking a big middle finger to the man.  Unpasteurized is far, far more digestible due to not nuking the good bacteria.  And no…bad bacteria does not infest raw milk despite what you’ve been told.  While I believe cows are stupid ingrates worthy of their McFate, sheep and goats rock.  So much so that believe it or not, I have both.  You can thank Mrs. Parrot for that. 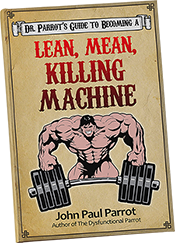 This is an excerpt from Dr. Parrot’s Guide to Becoming a Lean, Mean, Killing Machine.  Available now on Amazon.