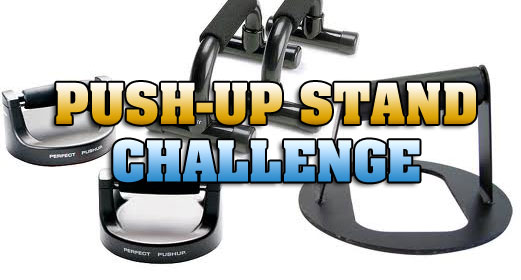 Time for another health and fitness review!  And this time we have the fitness industry promising another must-have gadget that will make us all go from a pork rhine eating Marshmallow Man to a chiseled display of perfection that Greek gods would bow to: Push-up stands.

In truth, push-up stands are actually living up to their reputation rather well.  They relieve wrist issues and in general provide deeper range of motion to an exercise that will do more for your body than most any other.  But like nature there is variety within the species!  So I thus present a review for the hottest push-up stands.  I’m sure I’ve missed one, but these are the heavy hitters… 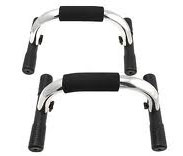 I’ve had a couple versions of these but the design remains relatively constant.  A U-shaped padded bar on a supporting base.  Simple, inexpensive and they do indeed get the job done.  Problems happen when wide pushups come into play.  Go too far and you’ll drop like a sack of spuds with quite possibly a wrist injury to boot.  These are great for beginners or those who are building a home gym on a budget.  I’ve had a set for a year or so and they’ve done a fine job despite their limitations.  Just be aware of construction.  I had a plastic set at first and they always looked like every push up would be their last!  Definitely go metal.

PROS: Deeper range of motion.  Inexpensive.  Get the job done!
CONS: Go too wide and you’re going down with possibly a wrist injury.  Quality is as varied as the manufacturers. 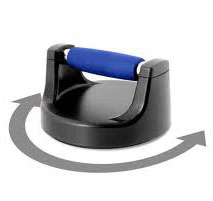 The biggest complaint on the web seems to be their “feature” to rotate.   I borrowed a set from a friend and while I wasn’t crazy about them, in all fairness I think the designers were trying to create a mechanism that would work core muscles by maintaining good form.  These certainly will accomplish that, and indeed they are easier on the wrists than regular push ups.  My real complaint is that they are not high enough to make any significant difference in push-up depth.  They also serve a singular function as moves such as dips are out of the question.  However, their low center of gravity seems to give better tip-over protection.  The plastic base feels a bit cheap, but should hold up.

PROS: Forearms seem to get more core muscle use in order to steady handles.  Portable.
CONS: Despite claims of being multi-purpose, they seem to be a one-trick pony. 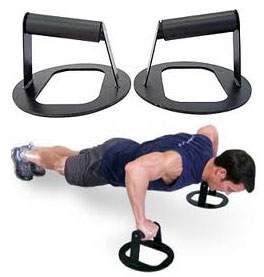 **UPDATE = As of 6/6/2011, the NEW design of the PowerStands is the only option. BB no longer sells the original metal ones as reviewed here.

If there’s a Rolls-Royce of push up stands, here they are.  I finally broke down and bought a set and I am indeed very, very impressed.  Much like buying a major appliance these days, most of what is out there cuts corners, is made of “durable” plastic, or is simply a knock-off of a bad concept.  These babies are none of that.  They are designed for the express purpose of comfortable hand grip, super deep range of motion, and no fear of failure due to their solid metal construction .  The first thing you’ll notice is that they are big.  Really big.  Even the hand grip has a wide diameter so it doesn’t cause undue pressure on the palm.  A double bonus is the angle of the handgrip which works with the natural angle of the hand itself and eliminates any undue pressure.  The range of motion with these is also practically unlimited as the base will not tip.  When you’re done using these, you KNOW your chest had a workout due to the depth.  They cost almost twice as much as their brethren, but I guarantee these will be the last push-up stands one would ever need to buy.  No planned obsolesence was built into these, and that in itself is rare these days.  Tony Horton of P90X owns the patent on the Power Stands, so that explains the lack of any knock-offs because I guarantee there would otherwise be many.  Probably a good thing as they’d all be plastic or cast-metal crap anyway.  The only issue I had was one screw needed tightening on one stand, which a Phillips screwdriver fixed in about 2 seconds.

PROS: No danger of tipping.  Near unlimited range of motion. Solid and built like an Israeli tank, so pass them on to your kids.
CONS: Expensive, but then again quality costs.  Not very portable.

Note: I am NOT a Beachbody Coach or affiliated with the company in any way!!  Reviews by those who are always seem dubious and self-serving to me.