Tapout XT is a series of DVD’s each around 40-50 minutes long and follows a 90 day schedule that mixes up every 30 days.  The workouts follow a martial arts/MMA theme and there are several high profile guest stars in the crowd of people doing the routine.  At least they say so.  I don’t know who is who in MMA at all so they could be either world champions or total hacks for all I know!   As an added feature, each workout also has the dreaded last “Killer Move” which is alone is a serious goal to achieve. 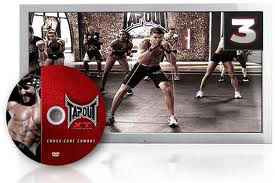 Day 1 wastes no time.  This is high core and high speed.  Things move fast so you won’t have a lot of time to get bored as you focus on explosive core strength with various versions of “Supermans” and punches with resistance bands.  CCC has a fantastic lower back and ab focus which means old farts like myself should look forward to less lower back pain as time goes by.  The cardio is not as hard as Insanity ( no max heart rate type stuff ), but the sweat on my floor seemed to think otherwise.  Just goes to show that a little more resistance and a little less downtime can make a huge difference. 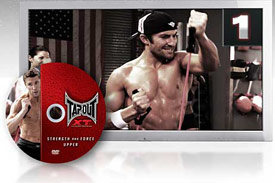 Bands, pushups, strikes and speed.  Although you get a “pro-grade” resistance band with this package, I recommend going to your local fitness store and getting a couple more of various strengths.  For example, I had to use a 42-60lb band for the bicep curls ( I use Ripcords ) if I wanted to get anything out of the motion.  Yet when I had to do the strikes I dropped to a much lighter band.

There’s a fair amount of pushups here, but you’re not really getting enough time to do max-reps.  Probably just as well considering how trashed you’ll be when it’s over due to most of them involving explosive movement instead of being slow and steady.

KILLER MOVE: KARPENKO CURLS – various bicep curls with band while lying on back. 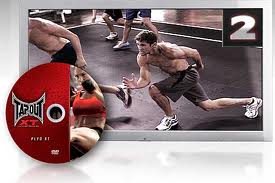 Plyometrics and martial arts are a natural fit, so it should come as little surprise how effective this one is.  In all fairness you really cannot compare this to other popular programs because Plyo XT follows its own rules.  First of all, even though you get a few water breaks there are no ( and I mean no ) breaks in between them.  That means you go straight from one quad busting move to the next with little chance to gain your composure.  Most moves are also a combo, such as frog jumps adding in strikes, or speed skaters with kicks.  But these serve mainly to distract you from the agony of the situation.

In short, it’s like the non-stop Insanity Pure Cardio combined with RushFit. 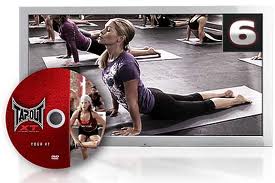 Yoga is a hard sell for any program because it’s outside the regular cardio/resistance training we’re accustomed to.  But need it we do and Tapout XT has this as part of your weekly schedule.

I’m no yoga expert, so maybe there really is only one style of yoga to do.   This is upward/downward dogs, warrior/chair poses and some stretches.  You hold the positions a bit longer than X2, so I appreciate that.  I can’t say much more about Yoga XT as it is just about verbatim the same as Yoga MC2 from Tony’s One on One series.  Even right down to when Mike says “Xsssssss…” and then quickly says “T!!”.  Nice save. 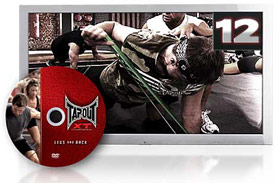 You’ll be using that loop band for this a lot, otherwise a good portion of this won’t really feel like much.   With resistance followed quickly by explosive movements, this is almost a form of Post Activation Potentiation.  While there is a lot of legs here, where’s the back?  True, there are a few row movements here and there but in between a leg set you often do push ups instead.  I’d say the back gets a good stretch, but not much more.

There are a lot of fast motions with resistance bands here so go slow at first if you want to avoid pulling something.  That is unless you’re a young punk in which case get off my lawn and go for it! 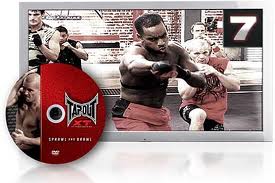 Think of this as a non-sissy version of Kenpo X ( which I hate ).  There’s lots of getting up and down, being on your back, doing strikes and explosive ground work.  Speed, core and co-ordination will be the goals to achieve here.

Mike also recommends workout gloves for this, but in all fairness you probably won’t need them unless your floor is sandpaper.

One complaint: He named a move “Jersey Shore”.  I’m pretty sure that’s illegal.  Sure Mike, we understand that you know the producers of the show.  But like my shameful past of working as a pig castrator ( no joke ), I keep that distasteful fact to myself.  Then again, the move is a floor punch, so just imagine you’re pounding “The Situation’s” face into hamburger.

PART 2 of Tapout XT review now available as the Parrot trains to a music montage and prepares to take on the Kobra Kai at the All-Valley Karate Championship with the help of TAPOUT XT!