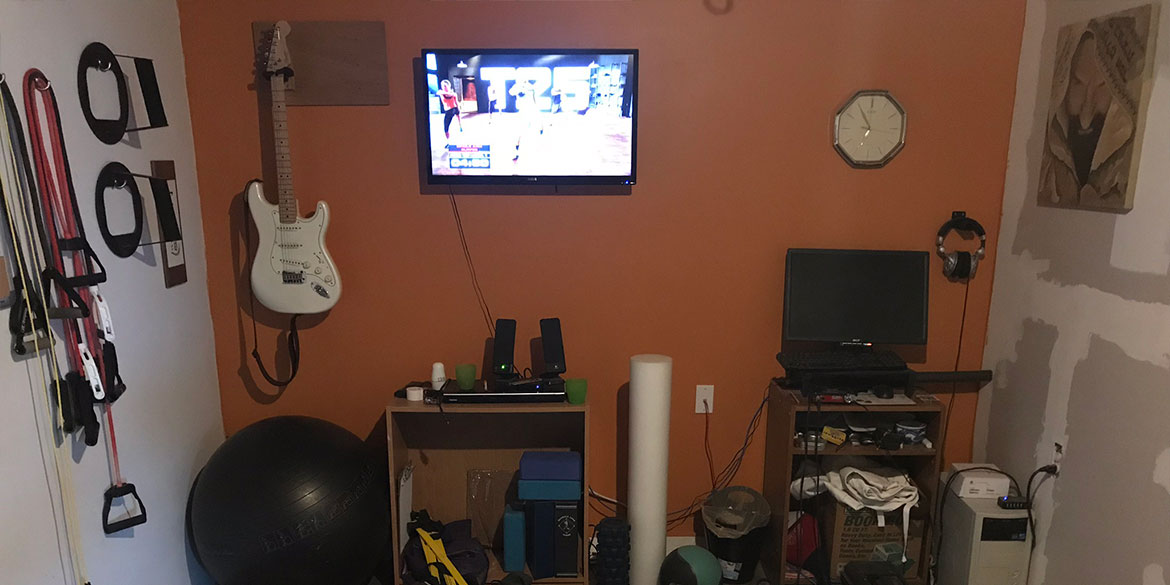 Every fitness enthusiast has their personal preference when it comes to where they choose to get the job done.  Some do the gym route, whereas I like to get up at a sickening 5:30am and migrate to my basement.  That’s where my magic happens, and where I want to take you on a tour to maybe give some inspiration on what you can do given similar resources.

Before we get into the details, realize that my house is a monstrous renovation work-in-progress.  So try and forgive the unfinished drywall and insulation hanging from the ceiling.  I’m getting to it already!

She might look a little primitive, but believe me, it’s come a long way from the bare concrete and stud walls when we moved in a couple years back.  Still, it’s functional as all get out.  Often times the opportunity to add interesting equipment is best when you don’t have a perfectly finished basement in your way.

This is where I begin.  Most of my workouts are predetermined weeks in advance on my whiteboard.  That way when I shuffle half-dead into the room at an ungodly hour of the morning, I don’t spend 10 minutes wasting time trying to figure out what to do.

This is also a good spot for resistance bands.  The karate decor helps give the area a “dojo” vibe since I still train in the way of the fist, a skill very suitable to a sedentary office lifestyle.

This is the main viewing area.  It’s a simple 32″ flat-screen, so it’s not going to win any home theater awards, but it more than does the job.  And of course, you have Mary-Ann, my Stratocaster.  I remember years ago wanting a better guitar but not having enough money due to the stork dropping off a third baby.  So I instead collected cans until I had enough to buy it.  I often joke it’s really made of aluminum.

The sound system is admittedly, very low-tech.  Some computer speakers take care of the audio while my main technology need is the AppleTV.  I run iTunes off a Windows 10 media server so a ton of workout videos are a click away.  Whether streaming from my phone or server, this appliance is a must have.

Having exposed joists does have definite advantages, not the least of which is securing a DIY pull-up bar.

The iron pipe at a local home repair store will create a near indestructible pull-up bar for a fraction of the cost of what you can expect to pay for a regular one.  Just be sure to use proper bolts to secure it.  As for hand grips, I use pipe insulation cut to size.   Yeah, and that hanging insulation is a work in progress.  Really, my reno list is a mile long folks.

And of course, weights.  I was able to get a ton of weights when my previous job’s gym was clearing out old stock.  I have sets going from 5 to 50lb which pretty much covers all the bases.  You’re probably also wondering about that thing on the wall.  It’s a makiwara.  Many karate practitioners build one in the same tradition that Jedi’s build their own light-sabers.  It’s just a thing.  If you want to make one ( hey, you never know ), I made a post for that here.

Simple laminate flooring is the base.  From there I added a foam and yoga mat for plyo work.  Eventually I’d like to get a large rubber mat to replace the foam as it tends to be prone to sliding and doesn’t handle dropping of heavy weights.

Outside the frame of these photos are other tools.  An adjustable bench for doing presses, and a treadmill that does an outstanding job holding laundry and collecting dust.  There’s also a plyo-box but it’s holding my tools at the moment.  When constructing your gym, be sure to take an inventory of things you need and go for those first.  Get the “maybe’s” and the “wants” later once resources become available.  With any luck, I’ve given you some inspiration to either build a gym or get cracking on your home renovation projects.