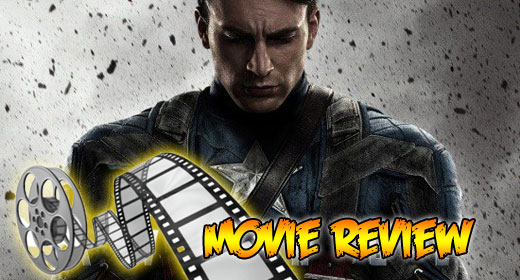 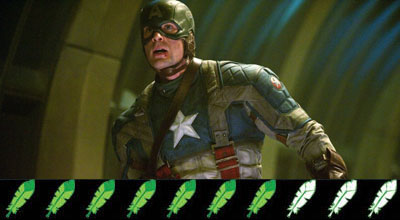 Like Spider Man whose theme is “with great power comes great responsibility”, Captain America has a message which is just as important.  A good man with a good heart can become great and a man with a bad heart will become worse.  It is a lesson that the true quality of a person is not with money, power, or looks but rather what is on the inside.  In a way, it’s almost weird watching this movie because it’s so counter-culture to what we’re constantly being told.

It everyone loves an underdog then puny little Steve Rogers ( Chris Evans ) is the man of the hour.  The little guy who never lets a bully stop him and has an insatiable desire to serve his country is destined to become a symbol for America.  Being the 80 pound asthmatic weakling that he is ( thanks to some impressive CGI ), he gets turned away from the enlistment office faster than Keith Richard’s from a Convent.   But his character catches the eye of Dr. Erskine ( Stanley Tucci ) , and he gets enlisted into the super-soldier program.

The rest is already legend.  He goes from runt to ripped after being injected with liquid P90X which gives him strength with improved healing and regeneration.   As the movie goes on, he enters into the war against the Nazi’s.  Oops.  I mean Hydra.  Man, what kind of a world do we live in where Nazi’s are not good enough bad guys anymore???

Alright, technically there are some Nazi’s.

To clarify, Hydra is a separate dark Ops agency kind of like SHIELD.  Therefore Hydra is a subsidiary of Nazi’s in the sense that Pizza Hut is one of Pepsi-Co.   So while there are indeed references to Hitler and the Nazi’s, it is almost mentioned in passing as Hydra takes precedence.

Hugo Weaving appears to have a lot of fun playing the Red Skull and captures the flavor of a power hungry madman very well.  But at the same time he’s aware that this is not The Dark Knight and is unable to live up to the pure awesomeness of Heith Ledger as the Joker.  But again, it’s not the same kind of super hero movie either.  This is primarily an origin story and a setup for the Avengers.

One thing that struck me as interesting was the lack of much historical accuracy.  The Nazi’s taking a backseat, high ranking female officers,  and an oriental in the Captain’s team.  Not to be racist of course, but this was the 1940’s and I believe they had special places for Japanese during that period of time. 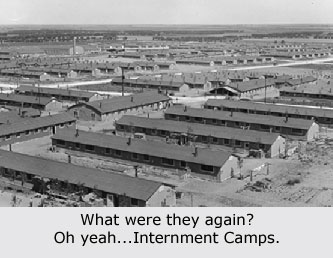 But then again, this is a comic flick and not the History Channel so it’s probably best to ignore the politically correct details. Really, that’s the beauty of it all.  It just doesn’t take itself too seriously while at the same time it doesn’t treat the material with disrespect either.   Comic book purists should walk home satisfied and newcomers will be entertained as well as can be about a strong guy in a costume who throws a Vibranium garbage can lid at bad guys.   Although to be fair, I’m also Canadian and my Marvel Super Hero equivalent is Alpha Flight…a team led by a guy wearing a high tech battle suit designed during the Trudeau years, and certain members of the team are a stereotypical native Shaman and a hairy midget in black leather. 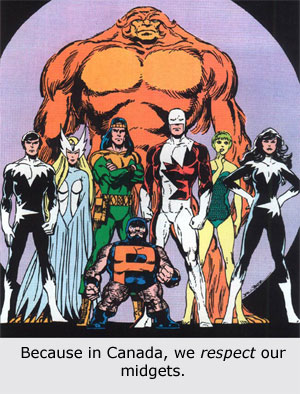 So how does it all flow?  The first 2 thirds of the movie are great. The last third of the movie turns into a Michael Bay blow up fest.   In other words the Cap makes things go boom and Hydra fights back with a lot of standard issue WWII high energy plasma disintegration rifles.  Betcha didn’t read about that in the history books huh kids!

Captain America is a great origin story that plays out very smoothly while amazingly enough is not a propaganda piece for the red white and blue.  Heaven knows it could have been!   It actually avoids the pitfalls of The Dark Knight which became dangerously close to becoming a schtick about Homeland Security.   But it also doesn’t reach the highs either.

In the end the lesson of CA is as simple as it is wonderful.  The heart of a man is what makes the hero.  Not the gadgets, the strength or the clothes.   It’s about what’s inside.   The truth is that because of the goodness of Steve Rogers he was Captain America long before he took any super soldier serum.  It merely enhanced what was already there by taking a good man and making him better.  Same with the Red Skull.  It took what was bad and made him worse.

And now we wait for the Avengers…

Violence:  Lots of disintegrated soldiers from laser rifles.
Nudity: none
Language:  Didn’t catch any.
Family Rating:  Great lessons, but viewer discretion advised due to dying soldiers.   The romance in the story is well portrayed with a strong message of waiting for the right person.