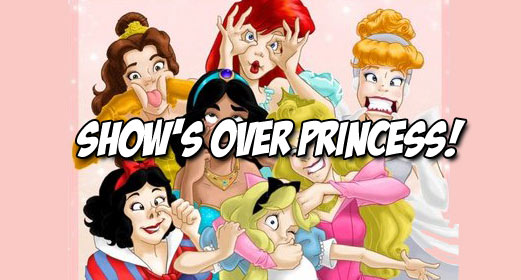 Anyone who has raised girls probably at one point in time will encounter Disney’s propaganda machine about being a Princess.  A mooching, useless, gold-digging Princess.

Life has been good to me in the fact that my two girls care for none of that crap.  They’d rather dig for worms in the backyard and hunt for frogs. And there is not a day that goes by that I do not thank the good Lord above for saving me from Disney’s plastic princess hell.  One of my nieces has a real princess fetish.  So I asked her point blank, “so, what do princesses actually do all day?”.  The reply? “Look in the mirror, do their hair and dance”.  The next generation of gold-diggers has been supplied courtesy of Disney to provide inspiration for tomorrows Kanye Wests.

Why even bring it up?  Seems Disney has officially pulled the plug on princess movies considering how socially obsolete they are.  The genre has run its course as a princess is now synonymous with idle living, sex scandals, and uh…Fergie.  For giggles, lets quickly run down the list of Disney “examples” over the last few decades:

In the last decent Disney fairy tale, Beauty and the Beast, Belle was able to see past Beast’s looks and abusive mannerisms for his true value: a big castle and a massive real estate portfolio.

That harpie mermaid Ariel married a guy after having knowing him for three days.  I’m sure his royalty had nothing to do with it.

Snow White had less common sense that an Enron boardroom to shack up with 7 obsessive compulsive midgets ( sorry, short people ) hiding in the woods who were capable of any number of deranged acts.  Then the flake just up and marries some guy who kisses her lifeless body just because he’s rolling in Euros.

Cinderella wore glass footwear that would never pass CSA standards for safety.  Plus she was no better than her money-hungry sisters.  The only difference was her looks and totally unfair access to a demi-god Godmother.

Princess Jasmine?  Think burkas and Islamic law.  That girl would be beheaded for leaving the castle with her belly-button showing.  Sure, Aladdin had less money than me in college, but Jasmine already had that base covered thanks to the Sultan.  Kind of like Archie and Veronica.

So what lessons have we learned from Disney’s Princess experiment?  That any guy no matter what his misgivings is worth chasing after as long as he looks good and has money.  Love according to Jersey Shore so to speak.  The animated abomination that was the Hunchback of Notre Dame made that clear…ugly deformed people need not seek love from beautiful people.  Rather, accept that the good lookers seek each other and you will never have true love.

Well, that is unless you’ve got access to the great equalizer…cold hard cash.  According to Disney the Hunchback would be sporting a harem if that was the case! 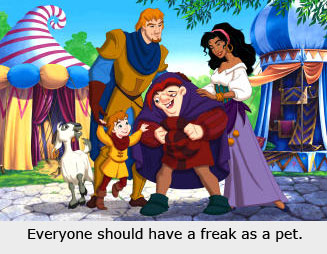 So thank you Disney.  Thank you for at least ending this social experiment that has created more expendable Kim Kardashians and self-absorbed couch potatoes that we care to admit.  Yes, we still must drown in plastic princess toys for a time until the warehouses run dry, but maybe there is hope down the line.