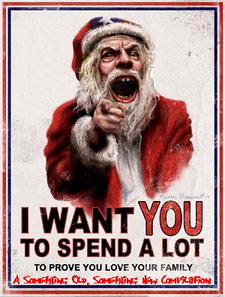 Somewhere between getting married and getting in-laws, the Christmas season became less about “Christ” and more about not being convicted for manslaughter.

The agony technically begins this Sunday, Nov 29 with Advent.  Although being a former Catholic, I never really saw the historical significance of it.  Maybe I’m supposed to eat fish or something.

Sandwich in there Hanukkah on Dec 11 this year.  That’s when I spin dreidels and eat bagels until I throw up.  Then I light a Menorah next to the Advent candles at which point my home becomes a serious fire hazard, as well as a theological mine-field for both Jews and Christians alike!

Then finally on Christmas Eve my wife’s family commits the unpardonable sin and opens presents that night.  Makes no damn sense to me at all.  You’re supposed to open them on Christmas morning!  Christmas…the grande finale…is then reduced to parking your tired butt on the wrapping paper infested couch, while mentally thinking about how much you spent on your ungrateful relatives as you barely stomach the cheap, re-gifted box of no-name chocolates they gave you…all the while vowing that if Santa were to walk in the room, he’d leave in two separate body bags.

Despite the Christmas agony that goes on…and on….and on…I have found some creative ways to actually make the season worthwhile instead of the self-absorbed, consumer whoring chamber of horrors it often can be.  While none of them may offer the sweet release of getting liquored up on a cheap bottle of whiskey and cussing-out the in-laws, they nonetheless leave you with none of the messy aftermath.

1) Send a soldier a card: You want to know what’s worse than your in-laws?  Getting shot at by Islamic warlords in WhereTheHellAmIistan that’s what.  Take the time to contact your local military base and get information on how you can send a soldier some holiday cheer.

2) Soup Kitchen: Is little Jimmy bitching about not getting the latest Playstation game?  Take the ungrateful little snot to the local homeless shelter to spend a day handing out food to street people.  It’ll be the best tune-up junior will ever get.  Nothing puts your pathetic troubles into perspective faster than handing out mashed potatoes to a man carrying his own thumb in a baggie.  I’ve never done this yet, but when my kids are a bit older I certainly plan to.

3) World Vision and Gospel For Asia have excellent catalogues where you can buy someone in a developing nation livestock, tools, books, etc.  Or better yet, sponsor a child year round.

Jesus said if you help another, it is as if you helped Him.  Bring Him the gifts.

Take Christmas away from yourself. 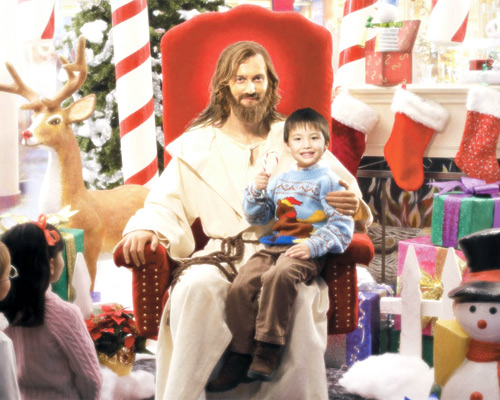