Few things make me want to break my kosher eating habits to knaw on a still live pig quite like another advertisement from PETA. 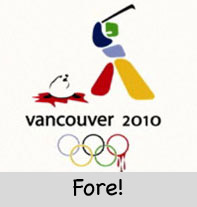 People for the Ethical Treatment of Animals (PETA) has launched a website called Olympic Shame 2010, features the stylized inukshuk — a figure of a person made out of stones, traditionally used by the Inuit — that was created as the symbol for the upcoming Vancouver Winter Games. In an animation, though, the inukshuk is swinging a club at a seal in a pool of blood.  From an artistic perspective, I’m almost impressed!

At this point, I’m not sure the acronym PETA is even appropriate anymore.  “ETHICAL” is being redefined as equality at best and damn near animal worship at worst.  And while cruelty is uncalled for, equality is simply not deserved.  There is a divide. Should I ever be staring down a pride of lions in the Serengeti Plains, I would hope they afford me the same courtesy PETA says I should give them.  But faster than you can say “Two All-Parrot Patties” I’d be making plans to see my maker as vultures flew overhead to clean up the table-scraps.

PETA could probably be an effective organization should they decide to act…what’s the word I’m looking for…sane.  But when you’re bitching out the President for swatting a fly, you have to understand that the world at large is going to mock you and your message, and rightfully so.  At that point the Queen of England herself could have a rare Bengali Tiger strangled to death and roasted on a spit, yet nobody would care if the news came from PETA.  The boy isn’t just crying wolf, he’s shouting utter bulls#@!.

In short, they’ve become a parody of themselves.

Look, any reasonable person would advocate that we should treat animals fairly, without any undue suffering.  That’s just being a responsible steward of creation.  Those who treat animals with undue cruelty are in my opinion, sick SOB’s that require a lesson in humility from the mighty foot of Chuck Norris.  But while I myself am a kosher-vegetarian“ish” eater, I’m also fully aware of our omnivore design.  I believe there are many things that shouldn’t be considered food for our own good, yet I am also aware that there are many things that have been given the “two thumbs up” by God himself.  Among those things are, yes…certain animals.

Am I the only one who’s hungry after all this?