Already I can hear the chosen few warming up to say “DP, how can you criticize another human being?”.  To them I say that first of all, I’m going after a vampire, and it is my God-given duty to fight the scourge of the night.  Secondly I’ve also had only one cup of black coffee that tastes like the vending machine just had bleach run through it.  So you really don’t want to get me started.

I remember the days when vampires were just all business.  The Lost Boys and Fright Night, just to name a couple.  Now don’t get me wrong here, I’m no fan of the vampire genre at all.  Vampire fans strike me as more messed up than the sick offspring of a Trekkie and Anne Rice. 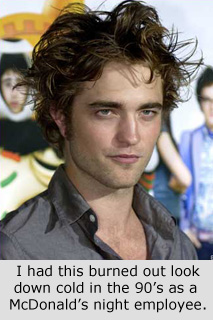 …just leaves me speechless.  Fortunately I can still write.

Now some might say that sure, 14 year old girls are making sure this guy gets a paycheck.  To those I say, shut your pie-hole while I’m making a point.  I work in an office building where women in their mid-twenties have pictures of this guy all over the wall, and I can’t understand why.

So I took the plunge, and did some investigative reporting. The kind that only yours truly, knows how to do.

First step, I needed to ask a fan.  So I picked one of the girls who I figured I could take in a fair ( or unfair, I’m pro-equality ) fight:

“Hi there.  You obviously don’t look completely retarded.  Do you think this picture of Robert Pattinson on your cubicle represents a handsome man?”

Her silence was typical of women who are in my presence.  I have a very commanding-“ish” aura.  After mere seconds that felt like minutes, she coldly replied, “uh, yeah”.  I had a live one on the end of my reel, and it was time to bring it into the boat so I could club and mount it.

“So what you’re saying…is that if I stop going to the gym, have at least 12 cups of coffee a day and put an end to sleep so I can have half-open, bloodshot eyes, I could technically be the next Brad Pitt?”

Silence.  Probably because she was envisioning me, her new champion.

“Plus I’ve noticed that this girl, Bella, has a thing for abusive relationships.  Her boyfriend seems to throw her around like Ike Turner’s teddy bear.  So I guess what I’m asking is do you have some need to be attracted to a man who smacks you around yet insists that he loves you?”

At that point she walked away, and I could swear I heard the sounds of weeping.  Not content to stop there, I approached one of her friends for a backup interview,  but I was met with a lipstick tube to my face.  I think she was trying to convince me it was mace, but this is Canada and you can’t just buy…AARRRHGGHH!!!!!!!!!