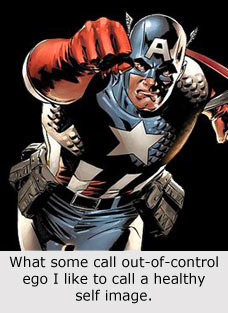 I’m a man of principle, conviction and carry an inner sense of justice more solid than Captain America’s shield.  This was the year for me to put the foot down, lay down the law, and re-mold Christmas by tossing all the commercial and pagan icons out the door.  Finally.

But I’m also a father, rendering many would-be rock solid decisions more flimsy than over-boiled Kraft dinner.  Such was the case yesterday at the home of the DP.

Mrs. DP: Hon, I think the kids want the tree up this year.

DP: Tell them that the ghost of Nero Caesar will haunt their dreams and eat their teddy bears if they give in to the pagan Roman idols.  We decided to ditch the tree, remember?

My wife and me had made the decision to stop putting up Christmas trees due to the origins of the blasted things.  I am after all, a hard-ass evangelical who likes to pick fights with trees.  True, trees can’t fight back.  Especially plastic ones.  Then again I’m not particularly good in hand-to-hand combat so I conclude that the odds are even anyway.  Yet as Christmas day approached, the resolve was waning for the both my wife and myself.

DP: Look, in just a few more day it will all be…

The doorbell rang and who should be there but the Purolator delivery man.

“Hey, what do you know…I’ve gotten this house three Christmases in a row!”

DP: Does that mean you’re the jackass who misplaced our parcels the last few years?  I’d put more faith tying a twenty pound parcel to a drunk homing pigeon than you guys.

At once he acted like I said something inappropriate.  But in his now sullen possession were two massive boxes from Santa.  Yes, Santa. Santa is actually my mother.  She doesn’t live at the North Pole but rather Winnipeg, Manitoba…which is a hell of a lot worse I can assure you.

So there we stood in the living room as a family staring at the boxes.  In them to be sure was presents.  Lots of them.  At once my wife went for scissors to open it.

DP: Don’t you get it?  If we open these then it begins.  The season wins and we go back to our old pagan ways.  Trees!  Mistletoe!!  Let’s just hide them in the basement until Christmas Day and we’ll tell them that Elijah or someone came and put them on the couch!

Mrs. DP: Didn’t you ask for some stuff from your Mom?

I immediately had a difficult time concentrating on pagan origins because visions of guitar strings and iTunes gift cards started to cloud my mind.   What, wait a second…is Nero playing a Stratocaster hooked up to an iPod?  At once I shook my head to reconnect with reality. 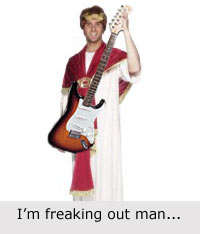 DP: …hand me the damn scissors then.

So I opened them and sure enough the kids became unglued as if the glowing embers of wrapping paper and the spirit of Christmas possessed them with less ease than a frat-party of demons on Ozzy Osborne.

D Kids: Tree!  Put up the tree so we can put the presents under!! 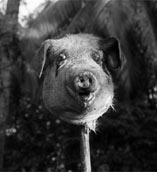 Oh crap, they’re dancing in the living room and singing!  It was like at any moment the children from Lord of the Flies were going to attack the pig and put it’s head on a stick.  Only they were staring at me.  It was like those Loony Tunes Cartoon where the Coyote looks at the Road runner and sees a cooked turkey, and I was not liking the feeling.

Mrs. DP: I think you better get the tree up before the peasants revolt.

So there you have it.  In mere moments the plastic tree was erected and decorations were covered by the children as if preparing for the sacrificial virgin.   Even I started getting involved with my wife looking on with a hint of a smile.  “You knew…!”, I thought.

In the midst of happy children and a thoroughly pagan Christmas Tree, my wife held a plastic mistletoe over my head and gave me a kiss…

Mrs. DP: Lighten up there Dad.  Merry Christmas you pagan!

I guess you can’t win them all!