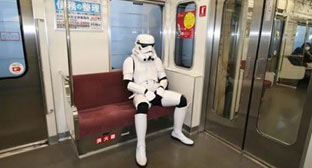 It’s been years after the fact.  Since then I’ve been trying to make sense of it all…the futility, the pointlessness.  Sometimes I wake in the middle of the night screaming and covered in sweat.  What else could I be talking about except the Star Wars prequels?

Words like Phantom Menace are the reasons why the word “prequel” has become a dirty word.  During all the time since they came and went I still find myself asking, “Just what the hell even happened in these movies?”

Here is my journey of closure.

I remember seeing the trailers and was I ever jacked to see this.  I even took my wife to the IMAX and remember the crowd cheering as the infamous scrolling began.

That was as good as the movie got.

While each of the three original films began with a quick to-the-point scene, all this provided was boring trade negotiations, and…asian alien bad guys?  Did I just land in the 1940’s?   OK fine, whatever.  Then…Jamaican alien Jar Jar?  It was at this point I glanced over at my wife who was looking at her watch. 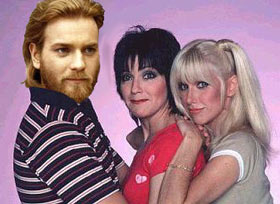 None of this movie made any damn sense.  It was like an episode…heck, every episode…of Three’s Company.  Big galactic misunderstanding leads to , I mean Senator Palpatine getting elected to higher office.  But at least he didn’t find out Obi Wan wasn’t really gay so he could stay in the apartment with two hot chicks.  Whoops, wrong show.

Anakin’s introduction was pointless.   He’s a slave?  Hardly.  This kid has better working conditions than any place on my entire resume.  There’s no anguish.  No antagonist.  Well, expect his Persian rug salesman boss.  However, I’ll bet Guato even provides Blue Cross and paid vacation.  There’s just nothing to make me give a crap about this kid at all.  Virgin birth?  Hey, that sounds familiar…

Cap it all off with a big robot fight scene where nobody gets hurt because its all CGI.  And for what??  A blockade?? Is Naboo so utterly desolate that they need food and water brought in after only a few days??   It’s only slightly less pointless than the Darth Maul duel where the Jedi Council only bothered to send one old Jedi, his student and…the kid?? Maybe if they sent two or three experienced Jedi then Maul could have been captured and interrogated.  It’s not like they were being over-run with paperwork back at the temple.

The main point established in this film?  The Jedi Council is dumb.  Really, really dumb.

2) Attack of the Clones

I’ve watched it several times and I STILL cannot decipher what happened.   In what was supposed to be the movie that made us forgive TPM, it instead stunk so bad that it make a Bombay slaughterhouse smell like fresh tollhouse cookies.

The beginning even makes no sense.  Why is there an assassination attempt on Amidala?  Why not any other senator?  What makes this lady so blasted special?  Did Charlie Sheen write this?? 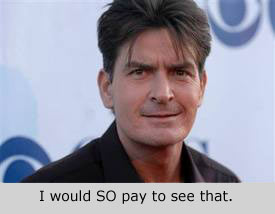 Then a clone army is discovered.  Obi Wan even asks the only smart question in the entire trilogy…“who authorized the creation of a clone army?”.  The Jedi Councils reaction?  “Don’t know.  Hey how’s the Amidala assassination investigation going?”.  Um, maybe there’s bigger fish to fry here Mr. Jackson.  Of course, answer that question and the story technically would end.

And then everyone decides to forget about it.  Ha!  I wish.  The senate then takes the clone army that was PRE-FREAKING MADE.  No questions asked.  Maybe instead of sending Obi Wan they should have called Bruce Wayne.

And then we have the “romance”.  I really have nothing to ad except that Anakin is a creepy, whining mamas boy, and Padme

is a tease in hot outfits.  I despise them both. And despite Anakins abilities with the force, I’ve seen better pick up lines at an amish junior high dance.

One last thing…Padme can’t do the wild thing because she’s a SENATOR?? I guess you need to be celibate to be a…oh wait…Bail Organa is married and also a senator.  Screw you Lucas.

3) Revenge of the Sith

Should have been called “Lightsabers Galore”.  Not a scene happens without a lightsaber going off and any mystique these weapons died long ago.  The only reason this movie exists is to bring closure to this pointless exercise in amateur film-making.

Again, the Jedi Council is run by autistic circus monkeys.  They screw up every single opportunity to uncover the entire plot throughout each film and here is no different.  Paul Blart Mall Cop could have figured this out in ten minutes!!  But Yoda is still the bumbling Barney Fife and can’t see the forest for the trees.  Even at the end when Palpatine is discovered.  Instead of publicly exposing him, they PRIVATELY decide to assassinate him??  It seems the Jedi are capable of only two things: Sitting on their asses and killing things with laser swords.

Nothing about the entire war makes any sense.  Why is the trade federation loosing tons of ships in a dumb war for no reason?  Just because some holographic guy in a hood says so? What’s the payoff?

And when did General Grievous become anything relevant at all?  The war will be over when he dies?  Says who?  Since when?  My head hurts.

Anakin’s decent into the dark side also lacks any emotional impact.  Not 5 seconds after his conversion, Palpatine tells him to actually FIND the trade leaders.  And Anakin doesn’t say, “Wait a second…you knew???  Oh man, what have I done?? I killed Samuel L. Jackson!!”.  I guess in for a penny, in for a pound.  Or maybe the Dark Side just makes you stupid too.

Finally, they take Anakin’s barbecued ass to be rebuilt.  Hey, if the force is measured by your midichlorian count, shouldn’t Anakin have a lot LESS now that’s he’s lost a couple limbs and is cooked to medium well?  No? Well excuse me for being so irritatingly logical.

It seems that the whole point of all three films was just to show the classic Vader suit.  But there’s no emotional payoff when it happens, and I even remember people laughing at the scene.  Yeesh, I don’t blame Padme for losing the will to live.  The audience nearly died for the same reason.

In fact, Vader’s arrival pretty much summed up my entire experience with the Star Wars Prequels… 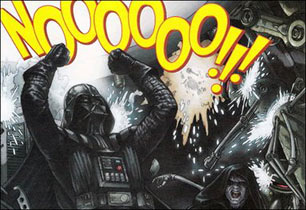