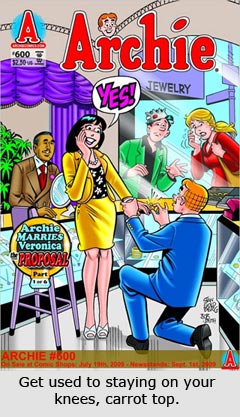 It seems a stupid, shallow, licentious crotch-hound that goes by the name of Archie Andrews has finally made his choice. In the upcoming 600th issue of Archie Comics, he will propose to brunette bad girl Veronica, leaving Betty, his sweet, blonde lady-friend, heartbroken.

Although an avid comic collector in my youth, I stuck more with the Marvel and DC universe’s over Riverdale High.  In my mind I merely assumed that at the end of time, Archie married Betty and Veronica got Reggie.  Everything else was redundant.  Moose beats up Reggie, Betty plays tug of war with Veronica, Big Ethel continued her hormone therapy and Jughead is blissfully unaware of the 20lb tumor growing in his colon from years of gluttonous red meat consumption.

So what makes a man pass over a gorgeous and intelligent blond woman who knows how to be the devoted rock beside her man for a high-maintenance consumer whore with a “princess complex” who can’t go two sentences without saying the words “it’s priceless!”?

Simple.  Archie is an idiot.  And as an idiot he’s getting exactly what idiots deserve.  You see, Archie spent about 99% of his time chasing every skirt in town, while Betty patiently waited for him to grow up.  And that’s the problem…Betty is better than that and deserves better.  So for Archie to propose to Betty, means that Betty gets the bum deal.

The alternate combination of Veronica and Reggie could never work either, for the same reason Sammy Hagar and David Lee Roth cannot co-exist…not enough mirrors to go around.  BUT, perhaps that is the same reason a combination like Reggie and Betty could work.  Opposites do attract, as my wife can attest to.

So, in closing, here are my Dysfunctional Parrot matchmaking predictions for Riverdale!…

Reggie and Betty: Reggie may have a thing for mirrors, but a girl like Betty is just the kind to massage his ego.  And really, what egotistical schmuck isn’t some insecure little boy inside wanting the comfort and security only Betty could give? Somebody hold me.

Dilton and Midge: What a second, what about Moose?  Surely Moose could crush Dilton like a rotten melon?  Well, as we all know brains triumph over brawn…well, except in actual hand-to-hand combat. You see, Midge never really liked Moose and just kept the big dope around to counterbalance Reggie’s stalking habits.  However, once Dilton explained the Pythangoram Theorem to her it was like lighting a fire of passion she never knew.  Using his brilliance to access Pentagon computers, Big Moose was listed as an “Enemy of the State” and is currently residing in the Guantanamo Bay detention centre.

Jughead and Ethel: Holy crap, you mean they actually get together?  Well, sort of.  Soon after graduation Jughead has to deal with that aforementioned cancer diagnosis brought on by years of Pop Tate’s burgers which turned out to be rejected horsemeat.  Compounded with leukemia from daily overdoses of cheap hot dogs, Jughead has mere months to live.  He marries Ethel out of love…for her cooking.  The rat bastard dies and donates his body to scientists who hope to uncover the mysteries of the black hole that is his stomach.

Yes, even in the midst of chaos, the universe demands order!