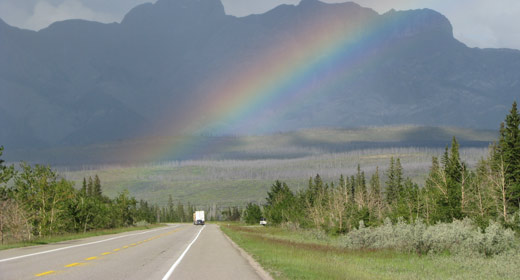 After the first phase of our vacation that involved creative urinations and impressing my in-laws with my children so much that an exorcism was performed on my three year old, the time came to begin Phase 2.  That of course was camping on our way home.

The place chosen was the Okanagan Valley of southern British Columbia.  The timing was good as cherries were in season and the weather was excellent. As a bonus my favorite local winery, Gehringer Brothers, was there for me to pick up a bottle of my favorite red. 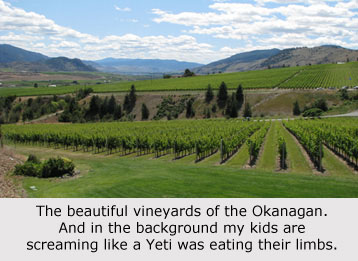 However, a campsite was chosen in advance and as such we sort of knew what we were getting into.  Packed in humans like a can of rotten sardines, each trying to experience the “outdoors”.  Thus begins the adventure of the Family ***ing Friendly Campsite ©. 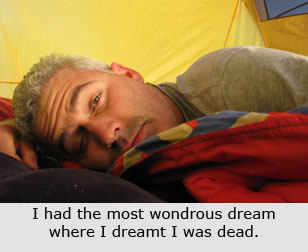 Now I don’t use that word without reason as I have a good reason in this instance. One morning we woke up to the groundkeeper getting in a verbal shouting match with the owner. The owner was clearly a professional cusser and handled the F-word like Johann Strauss handled a symphony.  When I let the occasional f-bomb slip from my mouth it sounds clumsy and amateurish.  Not so with this guy. In a way it was horrifying to hear the word used so many times in rapid succession, yet fascinating to hear it being handled like clay in a masters hand. 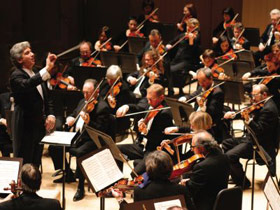 In case you haven’t guessed, we were camping smack dab in the middle of white-trash, complete with the sounds of the birds being broken by something which I think passes for music. And the aroma of summer is quickly shattered by the putrid stench of cheap beer.

For all my faults I have one redeeming quality:  I’m fairly considerate of other people.  If you camp next to me I will be the best neighbor you ever had. However, odds are YOU will be a filthy inconsiderate scum-bag who drinks beer so cheap it could pass for horse urine and feels the need to play an old 8-track tape of the Irish Rovers.  That’s just the odds. 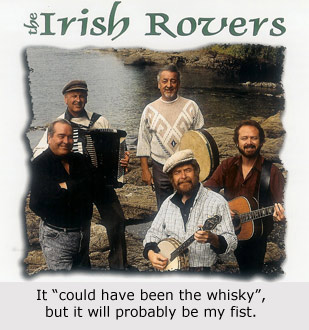 Then I started to wonder if there was any way we as a family could be a little more upper-class.  This is mainly because I looked over and saw a young family staying in one of the nearby cottages.  The mother dressed up for evening dinner and the two children who looked in their early teens sat quietly and tasted some wine from the local vineyards with some cheese.  Cheese…and it was probably even the REAL stuff.  They were the image of distinction.  I bet the little punk even combs his mothers hair.

My wife then puts her arm around me and wonders, “Look at that. Why can’t we be like them?” Classy.  Regal.  Distinguished.

Um, probably because of our children…as we both turn to see our 3-year old sponge bathing in the dish basin behind us.  She sees us looking at her, smiles, and continues without a care in the world.

Fortunately, we stayed only a couple nights, lest I be convicted of pre-meditated first-degree murder of my camping neighbors AND the Irish Rovers.  Would we return?  Absolutely.  I love this part of the country more than any other. But would I tent here again?  Not even if you started shooting my toes off.

Karma wouldn’t get off my back as a chemical spill on the road ahead shut down the highway.  Not just any highway…the ONLY highway to our next destination on our ride home.  Fortunately after long, excruciating delays we got through as our motel was 2 km before the spill.  The rest of the trip was through Jasper National Park where we stayed a few days and enjoyed the great outdoors until we got home.  Well, as much as one could while being in the middle of one of the worst mosquito outbreaks in years.  The little demons of the air would gladly lick the DEET off your skin to get a sip of your blood.  Good Lord, they were like flying lawyers. 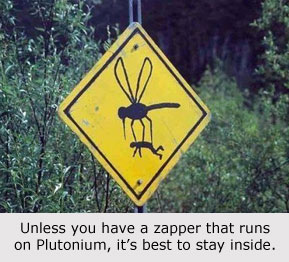 So is it true?  Is the worst day in nature better than the best day at the office?  Allow me to sign off with a short film ( Staring myself, The Dysfunctional Parrot! ) that best describes the reality behind that statement…