I’m going to let you in on a little bit of a secret.  I wanted to be a ninja.  No joke.  I even had the full black suit that I bought from “Ninja Magazine”….the official magazine for assassins…for $29.95 + S&H.  An added bonus I also bought a book called The Dragon’s Touch, which told me how I could best the school bully just by grabbing his scrotum and ripping it from his torso.  Hot damn.

But one day I came to the sudden realization that perhaps a career in presidential assassinations was maybe not an appropriate career move for my kind of person.  In short, I grew up.

Which segues in today’s vampire sub-culture of absolute losers.  Shut up, it just does ok?

I understand the whole pop-culture appeal of vampires.  I grew up when Jack Bauer ( Kiefer Sutherland for those who missed the joke ) started his career off off as a no nonsense vampire.  So at that time, the genre was sort of cool.  Let’s put it this way, the last time vampires were badass, Bush Sr. was President and Vanilla Ice was considered cutting edge rap. 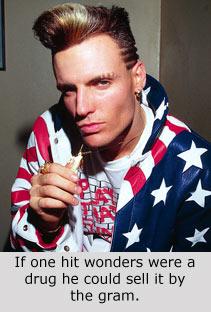 Contrast that to the Ethiopian eunuch dipped in flour that we have today in the form of Robert Pattinson.   Geez, the guy looks like he’d had an all week bender at Starbuck’s and obviously can’t afford a decent shaving razor. 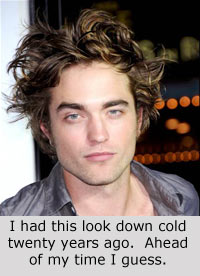 But that’s nothing when you consider the culture of people who quite honestly are just too damn old to be dressing up and acting like fictional blood sucking creatures of the night.  If a kid jumping around in a ninja suit is lame…grown adults sharpening their teeth, painting their faces white and wearing black in the heat of summer is far lamer.  It says something about our fat, over-indulged nation when individuals like this actually have the time to pursue such lofty levels of mental depravity.

I blame the goth scene.  Just because I can.  “Goth” is a fashion statement that much like the mullet, has overstayed it’s welcome to the party by at least 5 years.  So now “vampires” are the next step up, as being a mere goth is well, sort of “been there done that” and doesn’t attract attention like it used to.  The only thing that would give Marilyn Manson a second look these days is a Denny’s waitress. 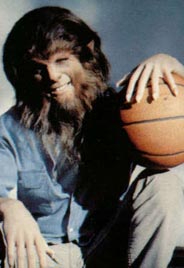 That disturbs me, because obviously the next logical leap is being a Werewolf ( scientific name Canus Idiotus ).  And while a bunch of Micheal J. Fox “teen-wolves” running around certainly has interesting hunting-season implications, I worry about hair implant shortages when the time comes for me to fix my own balding top.  Short sighted idiots.

So to all those stuck in goth-vampire fashion culture, I challenge you to emerge from your delusional fantasy and join us in the far scarier and crueler world of reality.  Put away your minimum wage night job as a McDonald’s cleaning crew employee and join the world of sunlight that as a bonus provides a steady dose of Vitamin D.

Or see if you can still buy a ninja outfit.  Because really, what’s the difference?