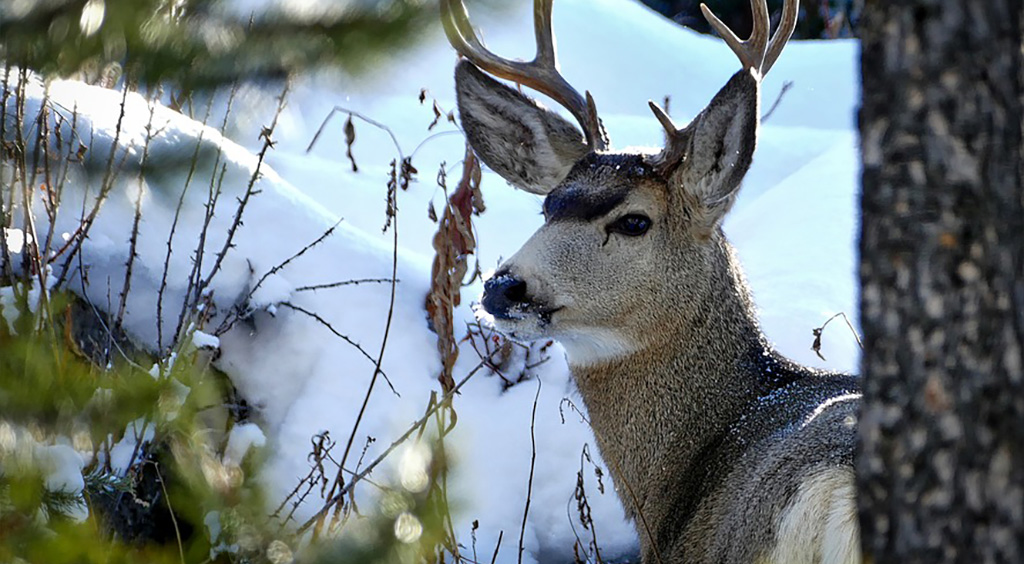 Love em’ or hate em, you can’t deny the almost magnetic appeal of the bushman.  Independent, strong, and radiating testosterone.   Beta-males flee from his presence.   There are timeless tales of the exploits of Davy Crockett,  Jedediah Smith and Daniel Boone.  Nobody sings a song about Justin the anemic barista, and that’s probably a good thing.

To give a little backstory, my father is a man with a frontier soul and it must have blown his mind to have his firstborn son ( me ) turn into a cubicle monkey and hack-writer.  Up until a few years ago, the idea of roaming the bear infested woods of northern Canada seemed less an adventure and more a suicide mission.

Thus, when discussing the cultural free-fall of rugged manhood with a few of my gruff elders, they drop the bomb on me…“You should go hunting, Parrot.”

The words hit the lobe of my brain like lightning.  Surely this was how a doe felt at the moment of impact.  I’ve never hunted in all my forty plus years and at times even considered such an act the recreation of beer guzzling drunks.  Come to think of it, what is a doe anyway?

Still, the idea forms in my brain until it rises to a boil.  And thus another crazy scheme is born.

This is that story.

My wife is a very tolerant woman.  I tend to get excited about things and over-think them ( “obsession” is such an ugly word ) to a frustrating degree.  Like the time I made a kilt for no good reason.  Naturally, her skepticism is understandable as is evident by her desperately trying not to laugh.  I continue to look at her seriously, and she finally cracks up.

After a solid minute she pauses her laughter.   “You?  You can’t even cut a chicken!”

“I…I can too cut a chicken!”  My mind privately recoils at the thought.

“You can’t even eat dark meat without curling your face.  You’re practically a vegetarian!”

My wife has this really annoying habit of defeating me with logic.  Nonetheless, she is always supportive.  So before the day is up, she talks me through carving a raw chicken.  I try not to cry.

Unlike Americans who have a Second Amendment, we in Canada wake up every day and hope our leftist government hasn’t gone rouge.  Yes…contrary to what many think, Canadians do own guns and even restricted weapons in case the squirrel hunt gets out of hand and a clip of  9mm slugs are just the ticket to put Chip and Dale in a casket.  This brings me to bureaucracy.

Signing up for a one day gun course was easy enough.  The problem was that it would be a couple months down the road.  Whatever.  In the meantime I would take a hunter safety course online which is mandatory for first timers.

Then, as should have been expected with layers of socialist BS, I wait while the government takes its sweet time sending me my approval.  No doubt some intern is getting felt up in the Parliament copy-room while my papers sit ignored.  I’m almost ready to give up hope of making the season when the package shows up.

Sweet.  I’m a registered badass.  On paper at least.

“I would like to shoot a helpless deer and if possible, have it die instead of enacting revenge.”

The Cabela’s clerk gives me a look I get all too often.  “What would you like to shoot it with, son?”

He reaches behind him and grabs a rifle that could definitely ruin someones day.

“This here is a 300 magnum.  It’ll crack an engine block and drop a moose easy.”

I hold the rifle and he puts a shell on the counter.  Jumping Jum Brunzel, it looks like a suppository for a Tyrannosaurus.   I look at the stuffed moose in the store and then look at the gun.  That’s a…big animal to put it mildly.  Suddenly I feel a sense of inadequacy, like this is simply too much woman.

He cuts me off mid sentence.  “What kind of car do you drive?  Does it have muscle and balls?”

A strange question considering the circumstances, but I answer.

“It’s a Corolla.  I prefer to think of it as having decent cardio and nominal testosterone levels.”  He quickly lifts the powerhouse from my unsuspecting hands and puts it back on the rack, but not before cleaning the areas I touched with a baby-wipe.  I assume this is standard practice.  He hands me another rifle.

“It’s a 30-06.  It’s drop an elk no problem.  A moose at 300 yards or less.  The bolt action is good for quick reload just in case all you do is piss him off with the first shot.”  I nod my head like I have a clue what he’s talking about.  “Will also take care of any coyote problems if you don’t want to keep the pelt.  What it lacks in muscle it makes up for in versatility.  She’s a beauty.”

I fondle the exquisite weapon.  The dark brown stock and simple but elegant bolt action make my heart skip.  I’m not sure if it is love at first sight.  All I know is that I’m starting to get an erection.

“Looks good on you,” the clerk says.  Thankfully the counter is hiding my crotch as to avoid misunderstanding.

This is it.  Time to commit to buying a tag to put an unsuspecting animal out of its misery.  A few clicks and viola…I now have a ticket to admit one mule-deer to the Dysfunctional Parrot Gun Show.

Now all I need is now is someone insane enough to go along with me.

Ever take your thirteen-year-old son to a firing range to burn through a few boxes of rifle ammo?  Speaking as a father, I highly recommend it as my stock went through the roof.

My oldest son is testing his manhood waters and the idea of trekking through the woods in search of game has him stoked.   My two daughters think I’m a horrible person and ask that I not shoot any deer that is married.  I assure them I’ll look for a ring first.

From here we go out hunting.  The first year we get nothing.  The second year again, nothing.

But the third years a charm…

“Did you know Bambi and Batman have practically identical origins?”  I inform my son as we slowly make our way to our destination.  The kid is loving every second of this.  Unlike many failed fishing trips, this time we have a trunk full of firepower.  The call of the wild beckons him and it is fun to watch.

You don’t talk much while navigating the bush.  Unlike the urban jungle, even whispers travel far.  Instead we do our best to tread lightly, and speak the silent language of hunting men.  This ancient communication apparently consists of hand signals and beef jerky farts.  Going from a desk job to stalking the woods for prey fuels a fire I can’t quite explain.  An hour in I make the armpit fart gesture to indicate Dad has use half a roll of toilet paper and drop some contraband.  At -15 degrees Celsius, this is always a joy.

Several hours in, my boy puts his hand up and passes me the binoculars.  In the distance are three mule-deer.  I choose the one that looks like it might actually fit in the back of my wife’s freshly shampooed van.

I load a shell into my boom-stick whom I have dubbed “Ash” ( Bruce Campbell fans will approve ) and put my prey smack dab in the sights.  Aim for vitals…allow for distance…breathe one.  Breathe two.  Breathe…

I don’t remember hearing the shot.

I look at the deer at my feet and marvel how, well…freaking dead this thing is.  And big.  I get a round of high fives from the boy and I put on a brave face but there’s still a shock about the whole thing.  I just harvested a deer.  Wait…I just killed a deer??

Thoughts of a young deer in the woods without their father linger in my mind.  Someday that little deer will grow up and become a vigilante and in my darkest of nights, Bat-Deer will…

“Time to start dressing!” My son whips out a knife.  Oh boy.

It might be surprising to admit that as a Systems Analyst and writer, you don’t remove the innards from dead mammals all that often.  But here we were, removing the insides of a deer which if you close your eyes, sounds almost like popping bubble-wrap.  My son is looking at me with amusement.  Clearly Dad is out of his element.

“Smile for the camera, Dad!”  I turn to see my son holding my iPhone and catching the moment.  I somehow doubt Apple will use this moment to advertise the new iPhone.

Minutes turn to over an hour but my son is expertly dissecting this animal like a science project.  Honestly, I’m not sure what we would have done without YouTube and decent cellular reception.

Finally I pat my son on the shoulder and give the nod to step back.  Mission accomplished.  From here we begin the three kilometer trek back to the van.  Wait, we didn’t actually bring a sled did we?  Aw nuts.

So we each grab a leg and start dragging.  In what can only be described as the most ruthless cardio of my life, we make it back to the van in an exhausted heap.  Next time I think I’ll tray lassoing a deer, walking it back to the vehicle and then shooting it.

We take everything and throw it in the back of my wife’s mini van.  First stop after this is a Starbucks drive-thru.  If I can give some SJW-hipster barista PTSD from a deer head sticking out the back window, I can die a happy man.

Few things are more satisfying than the smile it put on my wife’s face when she got to save hundreds of dollars from the grocery budget by having a freezer full of free meat.  The skill of providing meant I had the stones to do what it took to keep my family on top instead of getting fleeced at a grocery store.  I had fulfilled a historical role that my Y-chromosome approved of.

The most vital part was what it did for my son.  It built a relationship and memories.  It taught him patience, enduring cold weather, and tenacity.  So many men take the path of least resistance, become complacent and proclaim self-esteem without reason for having any.  My son now understood that we borrow from nature, and to be thankful for what is provided by the work of our hands.  This was the greatest gift we both received.

If I had to place the feeling, it would be a confident sense of self reliance that if the world were to go to pieces, I could at least perform my duty as a man and feed the family.  It is a skill that maybe the young bucks in society would do well to try, even if it’s only planting a measly carrot.  It connects you to the earth and grows a deeper respect within for its providence.  For me this was a moment in time when I escaped the world screaming in my ears and stood as a conquering hairy manly man of the wild.