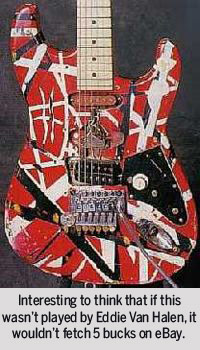 Today I got to touch a piece of rock and roll history.  An by touch, I mean it was a quick “feel” because there is no friggin’ way I’m going to be the guy who accidentally dropped one of Eddie Van Halen’s Frankenstrats.

I mean really, if I’m going down in history for anything, it will be because my eugenics experiments went horribly wrong and kicked off a zombie apocalypse.  A guy has to have his standards.

But as I beheld the awesomeness of this particular guitar…an instrument held by one of the greatest guitar players, one thought went through my mind…

…”this thing is a total piece of crap”.

Eddie may be one of the best players out there, but he was a half-cocked amateur when it came to using a soldering iron and duct tape.  Geez, I don’t think even HE knew what he was doing.

It got me thinking about our societies desperate quest for fame, even it it means simply rubbing up against something that was in contact with a celebrity.  Have we always been this obsessed?  I guess even when I was a kid I thought guys like Mark Hamill and David Hasselhoff were just about the coolest dudes on earth.  If I had an indestructible car and a robot hand that never got tired…uh, maybe that wouldn’t have been such a good thing.  Nevermind.

As I handed the $25K guitar back to the store owner, I came to a realization.  Eddie forged ahead despite his bad soldering skills and made a name for himself with hard work and practice.   Then he trashed his brain on cheap 80’s dope, so my object lesson sort of falls apart at that point.  I guess my point is that he didn’t take the shortcut to cheap, disposable fame by eating worms on TV like so many wannabe media whores out there.

Maybe we all can take a lesson from that.  Because if we did, there would be a lot less “reality” television. 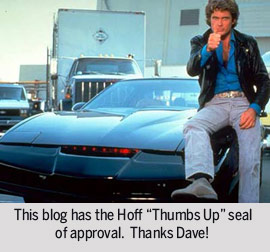