I’m one of few people who use a Mac at work and Windows at home…quite the opposite of many. But nothing…NOTHING on Windows can touch what creative things I can do in OS X.  And no, I don’t feel like learning Adobe After Effects just so I can make a home movie of my kids.

But being the cheap SOB that I am, I decided to put my technical chops to good use for a change and build a Hackintosh as to replace the Windows XP abobination that rests on my home desk.   My mission: All the Mac, at a fraction of the cost.

So a few days ago, I did it. I built it. It works, and it is solid-stable and super fast.  And you know damn well that you want one. So get out your shopping list and write this down… 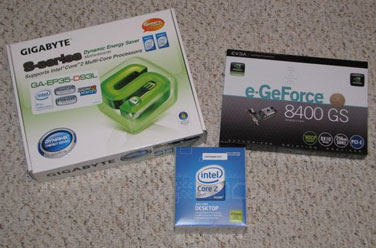 Gigabyte EP35-DS3L Motherboard. Rated as one of the best for compatibility. Got it on special for 94.00

3.0 GHZ Intel Core 2 Duo. I wanted the Quad, but the money had to stop somewhere! Still, a lightning fast processor by any means. $200

2GB Kingston DDR2 Memory for about $50

Case and 500Watt power supply, around $50. However, I pulled the supply and put in an Antec 450 I had lying around.

1 legitimately acquired and FULLY LEGAL copy of OS 10.5 Leopard. Don’t bite the hand that is about to feed you.

And most importantly, appropriate music to set the mood. 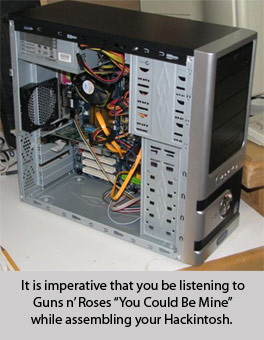 Put all your goods together. OK, ready? Let’s do some configuring.

Put you Leopard disk on the shelf and download the Kalyway 10.5.2 Installer. Go find it yourself, don’t ask me.

Now that you have it up, download and install the Kalyway 10.5.3 updater. Follow the instructions it gives you. Then update to 10.5.4 normally using the Apple software update tool.

You’ll notice that you still have no sound. Get the AppleHDA driver and put it in.

Install NVKush for the NVidia graphics driver.  The NVinject kext is old and doesn’t work nearly as well.

Get the OpenHaltRestart extension to fix your shutdown problems.

From here on in it’s just a tweak and a trim here and there. But at this point, you’re definitely ready to rock and roll.

Oh yes, a touch of class. 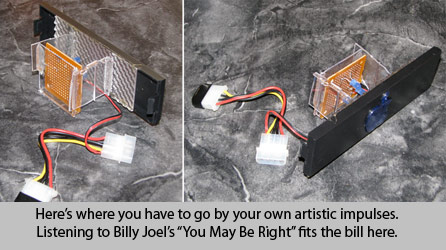 For this, you will need an Apple logo from the case housing of an old bondi-blue iMac, a faceplate from your new case, a dremel tool, a piece of diffused plastic ( from fluorescent lighting ), 3x 3.6V Soft blue LED’s, a 1/4 Watt rated 68 ohm resistor and a soldering iron.

Start the electronics assembly. Run the diodes in series and hook up to the 12V on your case power supply. Use epoxy and a bit of creativity to get things all in place. Remember, LED’s are polarity sensitive, so get your positives and negatives right. The 68 Ohm resistor will drain the remaining voltage ( led’s are taking 3.6V each, so 3.6×3=10.8V, leaving 1.2 Volts that needs to be taken care of ).  Glue the diffused plastic in between the LED’s and the logo otherwise it just looks like 3 stupid glowing balls under plastic.  Get creative with the epoxy and mount the circuit board.

Let the epoxy dry and pop it all into place. Power up your Mac. 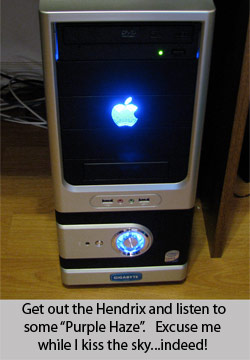 By the way…if you blow up your machine because you were too lazy to learn Ohm’s Law, don’t come a cryin’ to me. I guarantee nothing except my vastly superior intellect.

Now load it up with your software. Mine is 100% Microsoft free.   It is amazing how much is available for OS X that is open source.

That’s a wrap!  No more will I have to contend with Microsoft or even be forced to prostitute what little honor I have left by moving to Vista. There are alternatives people.

Time for all you Windows hippies to get a real kernel.