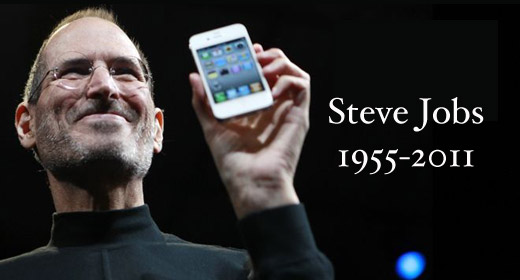 “Steve’s brilliance, passion and energy were the source of countless innovations that enrich and improve all of our lives. The world is immeasurably better because of Steve,”
Apple statement to the press.

Some things still come as a surprise even when you expect it.  Much like the awkward silence I have with my inlaws at holiday gatherings.  Yet the day has come, and Steve Jobs has died at 56 from cancer.

So here’s the deal.  Everyone…and I do mean everyone…is weighing in on the situation.  That is to be expected.  So allow me also to get in on the fray, as an Apple user who’s been watching the company since I owned my coveted Apple IIc. 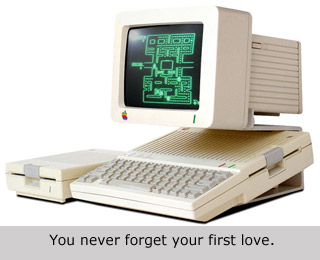 It doesn’t matter if you love or hate Apple.  You cannot deny that the artistic genius of Jobs will go down in history alongside big names like Einstein and Edison.  Yet naturally there’s a lot of controversy around his life and to be honest, most of the rumor resembles the steaming turd that some strangers dog leaves on my daisies.  I present Exhibit A:“Pirates of Silicon Valley”.  I really liked the movie, but “Pirates” was foremost entertainment.  Really, try making a movie of my life.  Good Lord…the timeline would go from bumbling child, disruptive student, compulsive masturbator, idiot boyfriend, intolerable Christian convert ( some things never change! ), directionless graduate, highly educated dimwit, to finally husband who married a woman far better than he deserved to completely clueless father of four children.

Oh hell yeah…I’d be the next George Washington of inspiration for sure.  But I’m guessing we all have a similar story.  Just like Jobs.  So lets cut the guys memory some slack. 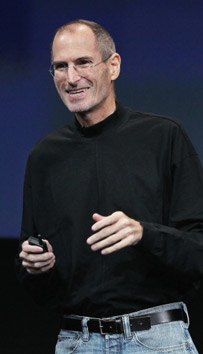 On a semi-humorous note, Steve was also a Buddist.  I think.  It’s hard to say for sure, but all I know is that he’s not in heaven.  That’s because heaven is from the Christian worldview, and under Christian doctrine he didn’t make the one choice that mattered.  Now out there, SOMEONE…probably you…is just burning up inside reading that.  Relax Dawkins.  If you’re an atheist then it shouldn’t matter.  That should be like me saying he’s not getting 72 Virgins.  Yet strangely the first statement gets you mad, the second doesn’t.  Enjoy your mental paradox.

Jobs was able to accomplish something that practically every corporate CEO has utterly failed to do.  Give a crap.  If I asked you to name me five CEO’s who cared for anything past the big fat pile of gold they sit on I’d be awestruck if you made it past two.  Jobs had passion for creating a different world through the company he founded.  When he came out with a new product, he honestly believed in it and that made it contagious.  Compare that to the visionless Steve Balmer, the dancing Microsoft monkey who laughed at the iPhone revolution.   While Jobs brought technology and culture together with an almost religious flavor, men like Balmer just laugh like fools at concepts they simply cannot comprehend.

Plenty of CEO’s have the symbolic rank of Captain, but are complete trailer trash in suits.  Steve was the true Captain of the ship.  Remember, Steve himself didn’t invent the iPod, the iMac or anything really.  He just led.  Even if hypothetically he was deep down a crazy bastard, he was nonetheless a crazy bastard with a passion!    Damn it, he was going to change the world and you either got on board or got out of the way.

It’s too bad we can’t have a few more of those rather than the army of filthy scum-sucking degenerates with attitudes of entitlement we have now who are just in it for themselves and their friends.   Truly the world of corporate innovation now has a vacuum that none may be able to fill the same way Steve did.

Rest in peace Steve.  Oh, yeah…right.  I mean, uh…thanks for the memories.

Maybe there’s a reason nobody asks me to do any eulogies. 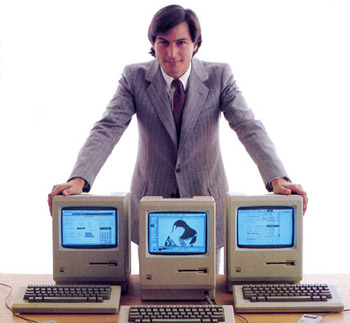