Not long ago I was guided to a particular website that essentially was a Chinese form of eBay.  I looked around, but it quickly became shockingly obvious that something was amiss on this site. 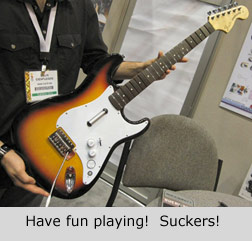 I even had a chance to see one of the gadgets up close from a co-worker who was quite proud of his “iPhone” aquisition.  On the surface, it was a total copy right down to the Apple logo.  The interface however, was complete crap. The icons were way off, the touchscreen unresponsive unless you applied Hurculean pressure, and the ability to sync with iTunes non-existent.  Just forget about the App Store.  That didn’t seem to bother the purchaser though because it was a “deal”.  In a way I feel bad for him because he never saw a real iPod touch.  If he had he’d probably throw his fake through a window.

And yet another person is buying a guitar.  Being exceedingly talented at making barely tolerable music on guitar myself, I was intrigued.  After all, why wouldn’t I want a EVH MusicMan or Custom Fender Strat for a fraction of retail?  Can’t be THAT bad right?

Then I woke up out of my fantasy.  It certainly can be.

It’s bad enough that our jobs are leaving the country, but I find it unfortunate that we’re selling out our local businesses to instead buy a knockoff of shockingly inferior quality.  That counterfeit iPhone is not from Apple. Those cheap glasses frames do NOT look like the real ones.  And the closest that Fender guitar is to a real one stops at the fake logo.  The vertically mounted pickups in the picture may also be a slight giveaway!

And oh yeah…don’t forget the warranty.  As in you’ll get none.

People who argue the dark side argue for cost.  I counter with 2 points: quality and loyalty.  Quality in the product and loyalty to ones economy.  It doesn’t cost much more to get the real deal when you think of what you’re actually getting.

I’m still saving up for my Made in America Stratocaster, and someday when my playing reaches a point where people no longer cover their ears in horror, I shall reward myself accordingly!  It will cost a bit more, but it will be the real deal.  And above all it will be made by an employee in my economy.

Where possible, save a job next door.