Life as a Christian can be often spent defending your worldview against some of the craziest arguments.  The recent antics of Harold Camping have only been the latest to keep the subject of false prophets alive at the water-cooler.   Yet every now and then I still get asked a few questions about those folks down in Utah and what the deal is with that book they’re peddling.

First off, a disclaimer.  If you’re a Mormon then you might as well go now.  Nothing you’re about to read will make you feel good, or confirm any feelings you have that the BofM must be true.  In fact, it will do just the opposite.

In my defense I have read the BofM, studied its history and that of the LDS church and practically broke the photocopier at the University of Alberta Institute of Religion ( LDS operated ) combing through and copying their own materials ad nauseum.  In other words, I didn’t Google my research.  I went right to the owners.   So please hold off on the “anti-mormon” accusations.  It demeans us both.

When testing the actual authenticity of the BofM, I have decided to take the same logical, hands on approach that I would give the Bible itself, and I understand full well from years of interaction and from going through Mormon literature that this is not how they do things.  Not to be cruel, but you can’t deny I’m speaking the truth about that, riiiiight? ( see #4 )  Nonetheless, I intend to be respectful and present only what is historically factual.  If you’re cool with that, then by all means enjoy.

For the uninitiated, you may one day find yourself presented with a curious book called the Book or Mormon that claims to tell of stories in ancient AMERICA…as in the United States.   Stories that when you read them, you may ask yourself, “What the #@!?  None of this stuff is anywhere in the known history of the Americas!”.  And you would be right.  It isn’t.   The book was actually written by Joseph Smith Jr., the founder for the Mormon religion and published in 1830.  Usually you will be asked to “pray”, get a “gut feeling” which means the book is cool allowing you to cease asking stupid and reasonable questions like why a book would ever be written on gold plates to begin with ( never revealed ), buried in Joseph’s backyard and translated using a stone in a hat.

However, the subjective Jello of emotion has at last hit the brick wall of logic within the walls of the self-proclaimed Latter Day Saints, leading to the near abandonment of the idea any evidence can ever be found to support their claims that the BofM is real history.   Good feelings or not, the events simply never happened.  It all started with…

According to the BofM, American Natives had the wheel, wheeled vehicles, money, steel making capability, wheat, oxen, goats, horses, 7 day calendars, plows and specialized farming techniques, writing, ocean going vessels, bellows, glass, and the compass.   None of which has ever been found and many are known not to have existed in the New World prior to the arrival of European explorers.

The Smithsonian Institute really did the trailblazing here.  They have long since stated that the subject matter in the BofM has never been used in legitimate archeology.  That stance is also shared by the National Geographic Society.  Not content to take that crap sitting down, Mormons began their own archeological research.  The result?  Joe Fredrick Diddely.  And if you doubt that, maybe hearing Elder M. Russell Ballard of the Quorum of the Twelve Apostles say it might help…

I haven’t seen that much back-peddling since a used car salesman sold me an old 88′ Chevy Cavalier.  Did he actually just say that thinking of the BofM as a historical document was NOT worthwhile?   On the flip-side, try reading the intro to the Books of Luke and Acts in the Bible and not coming to the conclusion that the Bible was meant to be a historical record.  If it’s not historically accurate, they I find myself asking what’s the point of it all?

The come-back excuse by many LDS of “well, they haven’t found much in the Bible” stuns me into utter shock.  First, discrediting someone else doesn’t make your position any stronger.  And uhh…maybe you’ve heard of this place in the Middle East called Israel? 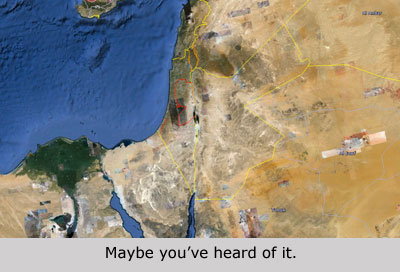 I mean for cryin’ out loud…you can actually JOIN an archeological expedition in Sodom and Gommorah that will soon be a National Geographic special.   Not to mention the treasure troves of practically EVERY city in the New Testament, and no small amount of the Old that date back hundreds if not thousands of years prior to anything in the BofM.  And the crazy thing?  All verified by NON-Christian/Jewish archeologists.  Heck, you can’t throw a rock in Israel without hitting some ancient history.  The BofM?  Nothing.

One final note on this.  Some “archeologists” claim to find stuff from time to time and then get published by FARMS, a Mormon research society whose sole purpose is to defend the LDS faith rather than promote truthful scholarship.  Ask yourself this question…can any claims be independently verified by a non-Mormon?  The answer to that question pretty much settles the issue, which is why the next phase the LDS Church went to try and prove their case was…

The supposed link between the American Indians and the Israelites is so necessary…so vital to the truthfulness of the BofM that the entire religion stands or falls upon it.

Enter genetics.  Mormon researchers have repeatedly attempted to make the link but have found what anthropologists have long already said…there is NO genetic link the Indians.  In fact, Native Indians have Mongoloid ancestry according to DNA testing.  This has long been known to the average researcher who has never suspected any common link in the first place.

These tests have been performed by actual Mormon geneticists with exactly the same results.  This has only one conclusion.  The entire subject matter of Joseph Smith’s vision is based on a complete lie.  Painted into this corner, many Mormons have either tried to downplay the evidence ( ie. denial ) or have taken the sensible approach and walked away from the LDS organization.   Those still unable to let go have abandoned the American Indian connection in favor of…

In lieu of the advanced societies described by Joseph Smith what we instead have are odd calendars, human sacrifice, flint, pottery, canoes, a wide variety of racial types developed over a long period of time, a huge variety of foods never mentioned in the BofM, tobacco, a wide variety of languages, all with Asian/Mongolian roots.   The cultural overlap is non-existent.

This idea seems quite recent in that up until a few years ago, Mormon missionaries never brought it up ( with me anyway ).   The reason was simple…Joseph was adamant that the subject matter of the BofM was in the United States of America.  Not Mexico, not South America…just the good old US of A.  To be specific, upstate New York to the Rocky Mountains.   Mormon Apostles throughout their history have repeated this fact.  And lets not forget, Joseph claimed to have found the plates near his home in New York…so why go looking in Meso-America?

However, when you have nowhere to go but down, the LDS church is spending a whole lotta dough looking around Aztec and Mayan archeological sites with one major problem…the Aztecs and Mayan civilizations were winding up just as the timeline for the BofM was winding down. Not to mention that as with the American Indian concept, the only archeologists making any Mormon connections are, you guessed it…Mormons.  Actual Meso-American archeologists are getting rather frustrated over this as well because it’s like asking them to take time away from their legitimate research to look for Leprechauns. 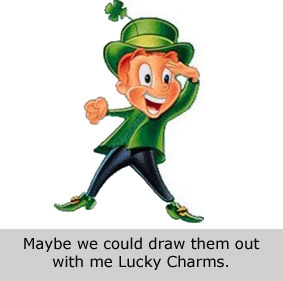 With the triple-knockout of no archeology, no genetics, and no plausible connection to Meso-America, Mormons have at long last been told to…

Think back to Point#1 and the closing statement by Elder M. Russell Ballard.  In an almost bewildering admission, he more or less conceded defeat regarding the historical authenticity of the BofM.  Take note at the end…FEELINGS ARE THE GAUGE OF TRUTH.

That my friends, was a classic example of throwing in the towel.

First, from a Biblical standpoint feelings are the gauge of diddely squat.

From a purely Christian viewpoint, the Bible never asks anyone to believe based on a gut feeling and the very idea is heretical.   The sages, prophets, and especially Jesus always appealed to scripture and reason…not feelings…when sharing the Good News.  Never was relying on emotion even implied.  Truth is truth regardless of whether you feel good about it.  Otherwise, your feelings are truth.  But if my feelings are different than yours, then whose are true?   I read the BofM and never got so much as a tingle from it.  But it wouldn’t matter if I did.

In retrospect, I actually got a buzz from reading the Jehovah’s Witnesses AWAKE! Magazine ( although it was probably just a negative vibe! ) so by Mormon thinking the Watchtower must be true.  Logically, feelings are simply a worthless tool to measure anything.

In fact, when the Apostle Paul rolled into town and stated his case, the Bereans checked out the Torah to make sure what he said wasn’t a load of bollocks.  Had Paul told then to ask for a burning feeling, they would have run him out of town.  That is how the Bible tells us to check truth.  Objectively, and by His Word.  Failing this criteria, the BofM asks its followers to just get a good feeling about it.

From a purely logical standpoint, emotions are without a doubt the most unreliable, lying, and twisted means of determining any truth.  What about for those who read the final book in the Lord of the Rings Trilogy?  It moved the hell out of me, but that doesn’t mean it was God inspired.  In fact, the BofM has nothing on Fantastic Four #267 .  Now THAT moved me to tears!!! 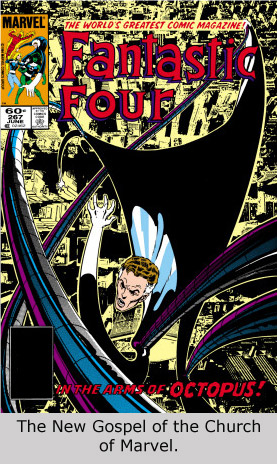 This list of strikes against the authenticity of the BofM is by no means exhaustive.   When reading through the additional origins of the known fraud of the Book of Abraham, the fraud of the Kinderhook Plates, outright plagiarisms in the BofM, the mish-mash of conflicting ideas in Doctrine and Covenants, Pearl of Great Price and the undeniable fact that the author, Joseph Smith was a complete BS-artist…the conclusion was clear.

Maybe for you, it will be too.

READ THE MORMON ENCOUNTER…a true story of the DP and his talk with some young missionaries.