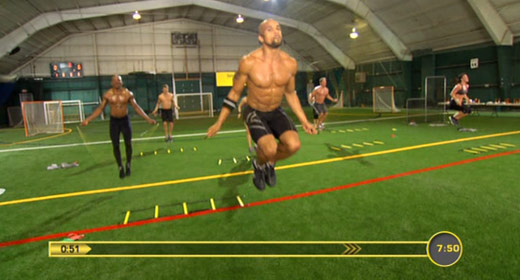 After my initial Part 1 Review of Insanity Asylum, I suffered a back injury that took me out.  However, I have returned to finally give my second part in a 3 part review on this beast of a workout. 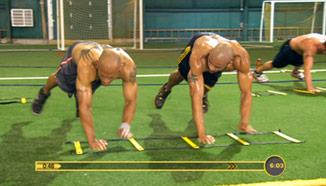 Even though I was still somewhat sore from my back injury, I went for it anyway.   Speed and Agility is as much a workout for your brain as it is for your body as you will be hopping and moving around the agility ladder in ways that will make you scream like Fran Drescher.

The goal of Speed and Agility is to go as fast as you can while still remaining inside your skill level. And if you’re like me, that won’t be an impressive level to begin with!  The warm up alone will hurt you, but that’s not the half of what you must endure.  Let’s just say that by the time you do what seems like the hundredth round of Ab Progressions, you will want to die.

You will absolutely need the ladder here because it is not just there for show.  In the beginning Speed and Agility will seem like a clumsy, 2-left feet workout until you’re able to get your experience up.  But when you get there, you will be awesome! 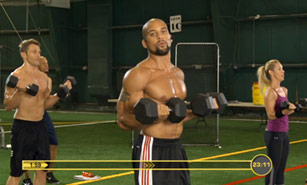 One of the original Insanity’s weak points was weight training.  Yes, the deluxe package had a weight video which was very good, but it was sort of an afterthought and not everyone benefited in having it.  Look out, as Asylum incorporates regular weight training into your schedule.

This workout more closely resembles circuit training.    And as a result, it gets painful real quick due to your whole body getting involved.

There are several repeated routines with crazy moves like Jumping Lat Pull Ups and Pyramid Pull Ups that will literally exhaust you.   The good news?   It’s all new stuff that is a combination of cardio, core synergistics, and pumping some iron.   You will use multiple muscle groups at the same time in moves such as Chest Press Leg Extensions, and as a result you will burn out very quick. 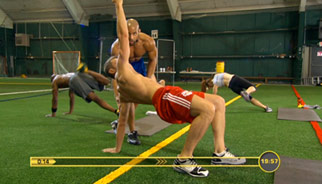 Weak low back or core?  Welcome to the cure.

BttC can be best described as a cardio/stretch/extreme core blaster. Again, it will take time to get the hang of many moves such as Up-Twist Curls. Other moves such as Reverse Plank are just plain cruel.

I have high hopes in what the future holds now that I have this workout in my possession. Even though I am a P90X and Insanity grad, I was stunned by the weakness of my lower back. This workout, perhaps more than any other will help prevent debilitating back injuries, and is now officially ranked as one of my favorites.

Perhaps better known as “You want me to do what??”, Vertical Plyo is the poster child for Insanity Asylum.

After already enduring a hard week, my legs were experiencing some difficulty in doing what they were asked.  The warm up alone will probably make you somewhat fearful over what is to come which is fancy jump rope, ladder drills, and jumping like a madman.

Your body will fight you hard on this as good old fashioned Insanity Plyo jumps now transform into Resistance Jumps. You may require a workout band ( stretchy circular kind ) eventually, but if you’re like me I wouldn’t rush out to get one just yet until you have some experience with this.

Co-ordination will take some time for many moves ( Rotational Jump Squats ), and some will just take a while to develop strength ( One-legged knee jumps ). After two or three my legs were jello.

At the end of this you will be bagged. I had nothing left to give when it was over!