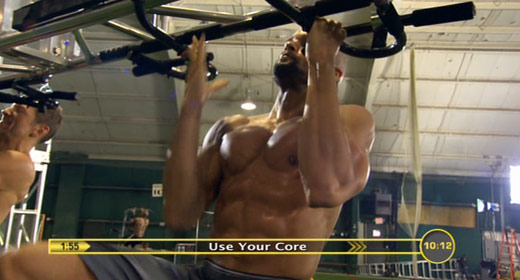 Here it is, Part 3 of 3 of the Asylum Review!  After feasting on the souls of nearby strangers I acquired the strength, determination, and plain insanity required to bring it all to you. 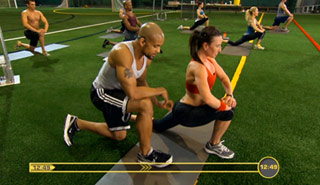 Relief is an entirely do-able 25 minutes of stretching and working out the kinks.   It’s not like Yoga X or has any difficult isometric postures that work up a sweat.   There’s no ultimate goal to turn you into a human contortionist, just taking some time to give your beaten muscles a break. So by all means dress up in your Sunday best and go for it.

That’s actually what I like about Relief.  Shaun understands that you’re fried and need a serious rest or you’re just not going to make it to the end.  You won’t work up a sweat, but you will attack the areas that have been beaten which are your legs and backside in particular. 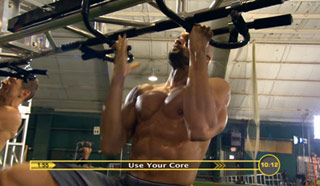 If all your nightmares could combined then Game Day would be it.  It’s the BoogeyMan, Freddy, and Margaret Thatcher in a thong all combined into one sinister beast.

Game Day is a routine that normally doesn’t begin until week 4, but I jumped ahead for the sake of this review.  This workout wastes no time and begins straight up with the 1-Mile Run with a short stretch between sets.  After that there are moves based on track, tennis, soccer, swimming, skating, football, rock climbing, and baseball.  In terms of a humorous sidenote: Alishe gets the DP Medal for Bravery for giving Shaun what he so rightfully deserves after the brutal football drills.  But it’s all in good humor!

The goal for this routine will be fighting the urge to stop.  The speed-skater drills was a battle of wills that I’m sorry to say I did not win…this time!  This DVD is a deadly combo of high-speed/high-core that will look like an ugly, three-eyed mess until you get your skill level up with the Asylum program as a whole. 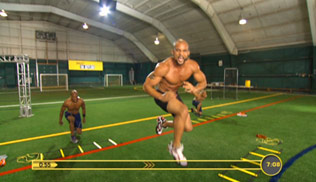 Wait…you actually have more in you?  I hate you. If the end of the Game Day workout is a pat on the back for your muscles, then clearly Overtime is meant to be the “psyche!” followed by a sucker punch.

Overtime is an extra 13 minutes of intense plyometric punishment in the event you’ve completely lost your senses.  It involves nasty jumps, squats, ladder drills, jump-rope, and a surprise punch in the face with pull-ups and push-ups.

For the sake of you all I went for it right after the Game Day workout, which is how it is intended to be done.  My Power Jumps were getting ugly and my Bear Push ups looked like I had a ten shots of tequila and David Hasselhoff’s salami sandwich. 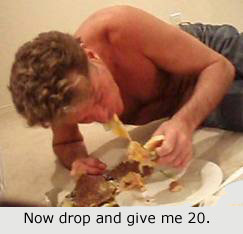 This is absolutely a great little bonus workout in the event you have that little something extra in you that needs to get out.  The only downside is that, well…um...Shaun T looks like he’s working out in his underwear.  Yeah, I know, they’re running shorts. I’m just sayin’. 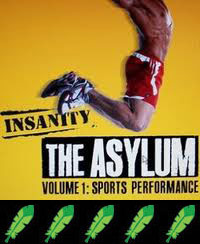 Insanity Asylum does indeed live up to its hype.  It was branded as a multi-sports training package for those who are already super fit.  Those who are merely good-fit ( which I humbly class myself ) will still gain much from it.  We just may require a few clicks of the pause button to get through it alive.

Production value is top notch and as perfect as it comes.  The music is similar to the original Insanity and in some case uses the same music that has been remixed.  I’m a rock n’ roll sort of guy and even I really enjoyed the sound in this sort of environment.  The pace is also what you would expect in this sort of fitness package.

But what about Shaun T?

I remember my previous review of Insanity where I commented that Shaun spent much time telling viewers to dig deeper and go for it, but not much else.  Yes, he still does that but he’s more of a coach now making note of the finer details.  With each passing DVD series Shaun is morphing into a complete, total fitness instructor/coach and is certainly going to be the future face of fitness at Beachbody.  He’s confident, serious, and funny when necessary but never over the top.  And damn…I swear he’s getting in exponentially better shape every time he makes a new series.  I don’t have a 3-D TV, but each time he takes off his shirt to show his abs I instinctively duck.

If you’re a graduate of either the first Insanity or P90X then I highly recommend you go after Asylum as another weapon in your fitness arsenal.  It’s meant to be a 30 day regimen that breaks away the monotony of your other programs.  And even though I’m just a couple weeks in, I’m certainly seeing how this can accomplish so much that Insanity or P90X misses.   Just understand that there will be a period of adjustment when you’re learning and mixing co-ordination and speed.   It’s not for everybody, and the program loudly admits that.  But for those of whom it is meant for, it is gold.   A well deserved 5 Feathers out of 5