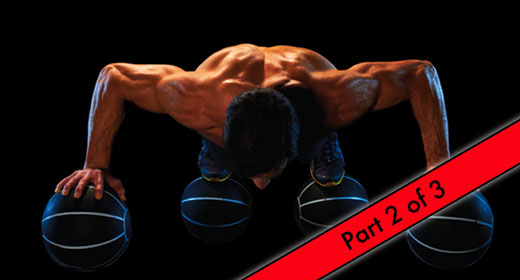 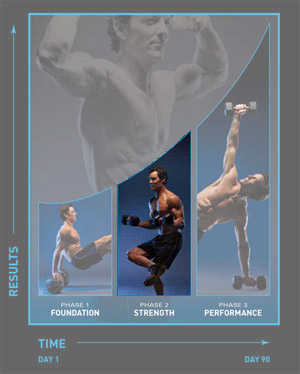 updated Dec 30 to include Bonus workouts.

With the completion of Phase One set of disks, it’s time to move on to the next phase…strength.

Phase 1: Foundation was able to lay the necessary building blocks for the upcoming nightmare that is Phase 2.  This is because many movements here are not simply pumping iron, but doing so using multiple muscle groups by maintaining balance ( pushups on balls for example ).

But don’t get cocky.  This too is only a gateway to the final assault that is P.A.P. ( Post Activation Potentiation ) Performance phase.  So get your weights, grab your balls, and press play!

CHEST BACK and BALANCE

Every push-up involves attempting to use medicine or stability balls for an added level of difficulty.  Some are fairly straight forward. Others, like the Impossible/Possible Push-Up, are simply there to make me feel like a clumsy oaf.

The chin ups are also different than the first C & B, but shouldn’t pose too much problem adjusting to ( except Levers ).   And like the original, it alternates between push-ups and pull-ups for a total of 21 moves.

But is it tougher?  Yes…and no.   P90X Chest and Back still makes me practically want to puke, but that’s because I can physically do the moves and thus I keep going.  Here I spent a lot of time correcting my balance and well, falling down.  However, once balance is gained then this routine will make anyone want to barf out their gall bladder.  So give it a little time and follow the Tip of the Day: Modify to finish.

The kids are good natured, but I was worried Kelly was destined to be the next look-at-me-lift-featherweights-and-grunt Katie ( of P90X Back and Biceps ).  Fortunately humanity is safe as my concerns were unfounded.

THIS WORKOUT IS  FOLLOWED BY PLYOCIDE, RECOVERY+MOBILTY ( reviewed in Part 1 ), AND THEN…

It’s old school pumping meets new fangled core, and in doing so will connect all the muscles you’ve probably spent a lot of time isolating in the past.   It’s 3 rounds of 7 moves and all of them involve standing on one leg, or using the stability ball.  What will rock your world are the Crazy 8’s bicep curls that will give you an out-of-this-world pump while making you scream like Keith Richards confronted with an empty mini bar.    A word of caution here:  get in position for your tricep pulls carefully on the stability ball.  Dang near broke Tony’s #1 rule: Don’t smash your face.

The kids are having a lot of fun here, and I especially like Jason Scheff.  The man is 49??  No joke, he looks 30.  Maybe.  But that’s what I like about this program.  It has people past what might be considered “prime years” who are fit as Hell.

THIS WORKOUT IS  FOLLOWED BY X2 Yoga ( reviewed in Part 1 )

Tony’s goal here is simple.  To destroy us.  Two rounds of repeating 10 moves is the name of the game.   Where the difference lies between this and P90X Legs and Back is the use of weights…or lack thereof ( except for Plyo Lunge Press ).  This should probably be thought of as Pull-Ups and PLYO.  But don’t let that fool you into thinking this is somehow easier.  Subscribers to Tony’s One on One:MC2 might notice a lot of familiar material here and also might remember just how hard it was surviving that hour long monster.   From that he brings gems such as Jack-in-the-Box Knee Tucks that close out each round and the appropriately named Kippy Cross Fugly Pulls ( that’s stands for FAST and Ugly by the way! ).

The focus on Plyo over weight training in this workout might lead one to believe P90X2 has neglected a vital part of training.  You might think that if you stopped here and did not progress to Phase 3: Performance which will trash your legs with Post Activation Potentiation ( in part 3 of this review ).  PAP will kick your butt not just once, but four times a week.

Sold separately or as part of the Deluxe and Ultimate Packages are 2 extra workouts.  In order to give the strength phase more variety, Tony has made videos to substitute P90X BB and CST:

This is meant to be the new Back and Biceps but has grown to become so much more than its predecessor.  It’s 23 unique moves alternating between pull ups and curls until you puke.  The curls are made more creative with the addition of balls for some balance and core work.  The pull ups are also nastier as they involve a lot less “kipping” ( body motion to get momentum ) than we might have allowed ourselves to get away with in the past.

The kids chatter is very focused on their weights or band usage so it feels like an honest to goodness gym situation.  But its a fun workout and in my humble opinion is worth the extra moola to keep the strength phase from getting too repetitive.  Because lets be honest, a lot of us will enjoy doing these kinds of strength workouts!

The only time I had to do this DVD review was doing the late shift at work.  Since I’m all alone in what is essentially an isolated bunker, I had my trusty resistance bands for this one!  And I don’t mind saying that these things destroyed me!

X2 CST is 11 moves repeated for 2 rounds and much like the other strength workouts it incorporates balance and core to make it more effective.   It’s certainly well rounded and I always enjoy any workout that has Bobby Stevenson in it just because the guy brings a fun yet serious mood unlike, say…Phil ( P90X CST ) for example.   In comparison to P90X CST, X2 seems to assault the shoulders more while P90X will probably trash your chest more.

Phase 2 lives up to its name by giving you strength where you didn’t know you had muscles.  It integrates old school muscle isolation with new discoveries in core training.  Tony has learned a lot of new tricks, and you will find no shortage of them presented here.  Because of the heavy…and I mean heavy…use of balance and core, I highly recommend doing a full round of Phase 1.  For the sake of this review I’m doing each Phase for a week and in many cases I am suffering for it.  But damn it, I love you all like you were my own illegitimate bastard children so no sacrifice is too great!

The warmups in almost every video thus far are for the most part identical.  But I appreciate that Tony went the extra mile and at least DID the warmups.  That was my main complaint about Georges St. Pierre’s RUSHFIT…every warmup was just recycled footage.  Even so, the time given to use the foam roller will always insure you get what you need for that day, so I can hardly call this a complaint.  More of an observation.

At this point the program keeps getting better.  Unlike P90X, X2 has a much more customizable approach and feels more mature.  At this stage in your journey Tony assumes you’re not a fitness idiot and as such are capable of modifying, using stretch time to work on your own personal weaknesses, and even deciding to focus on a Phase of your choosing.

But the best is yet to come.  The much anticipated and highly feared Post Activation Potentiation of Phase 3 awaits…

Can the Dysfunctional Parrot keep going at top speed to bring the final part of this review to you?   By feasting upon the life-force of the internet’s surplus of expendable bloggers, you know he will. 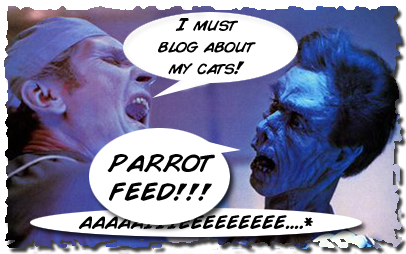