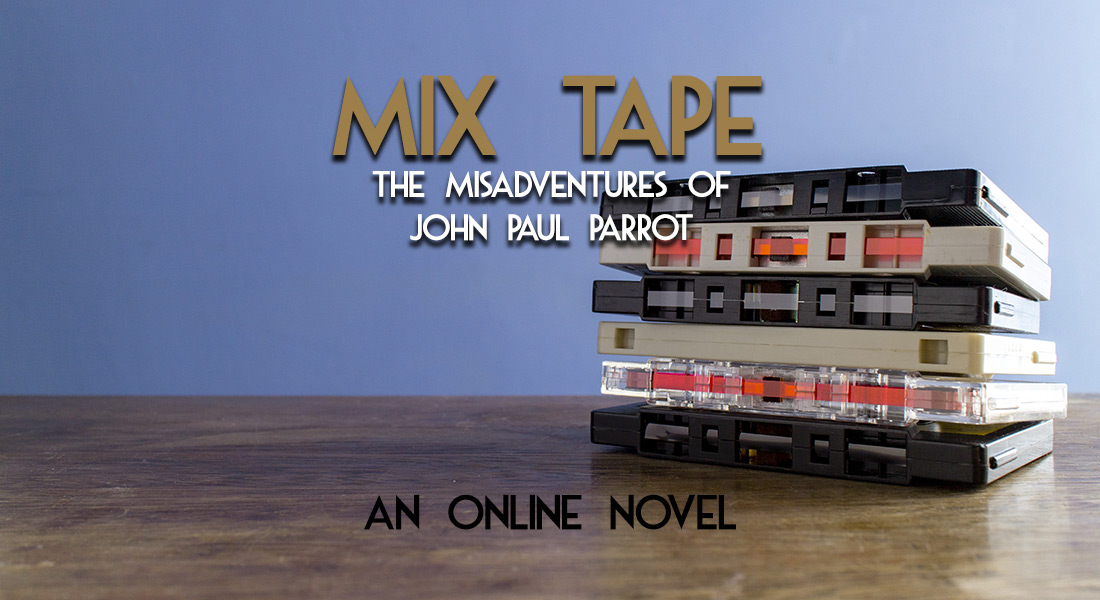 “Are you sitting comfortably?
Then we’ll begin.”
– Platinum Blonde

Hello, my name is John Paul Parrot.  For all intents and purposes, I am a nobody with absolutely no bearing on your existence.  My current claim to online-fame is being a fitness reviewer.  Agreed, that’s not much of a resume.  In fact, as a B-level reviewer, my celebrity status might be considered less than Pewtie Pie, but greater than a cabbage.  I’m the average guy, living in the middle with stories to tell.  Some of those stories make me wonder how I managed to stay alive.

What kind of stories?  Well, growing up a small town boy in rural Manitoba, you’d be surprised how many tales one can share of growing up.  In contemplating this narrative, I struggled to find an appropriate starting point.

And then it hit me.

You often hear of people going on great spiritual journeys to faraway lands.  Jerusalem, for example, has the best falafel stand just a Rabbi’s stone-throw away from the Western Wall.  Perhaps a less well known place of divine connection, would be a small hilltop just outside St. Alphonse, Manitoba.  Think of it as a pilgrimage for the budget conscious.

A good number of my ancestors are buried at St. Alphonse, since there wasn’t a whole lot of options available for dirt poor Belgian immigrants.  It’s also a very, very, Catholic community.  If a local family didn’t have a priest or nun somewhere in the tree, they were obviously using a condom.

All of this naturally requires a little backstory.  By cultural extension, I grew up in a very Catholic family.  And like all good Catholics, we didn’t really give the whole thing a lot of thought except when the offering plate went around and Dad had to grudgingly give up his beer money.  I was a little different.  I always had a sense there was something out there greater than we could comprehend.  And as we all know, any Catholic that takes his faith even remotely seriously has one option:  for boys, priesthood and celibacy.  For girls, the convent and celibacy.  Whoever came up with this celibacy concept really needs to be taken to the woodshed.

Given that my Catholic heritage comes down my father’s Belgian line, there was no small amount of tension when he married a Welsh, United Church girl.  Back then, that crap just didn’t fly without shots fired.  My mom did what she could to create peace and went all-in on making sure we flew under the Catholic flag.  It did little to help, as with Ireland, it’s best to remember differences have less to do with any actual theology, and far more to do with tribal backgrounds.  I get the impression the early years of marriage were not made easy due to disapproval from the in-laws.  But they loved the daylights out of each other and proceeded to have six kids in proper sans-condom Catholic fashion.

As a youngster, family expectations and tradition had not been unloaded on me to any real degree.  For now, I was content to build the Millennium Falcon out of an old chicken barn and live life with half my head in a galaxy far, far away.  That would change on a warm day in late summer of 1983.

I remember being in the back of whatever rusty Chevy Nova we owned at the time.  This was just before seatbelt laws, so there would have been six of us filthy little urchins back there.  Sometimes we would even transport a live calf in the trunk, much to its astonished horror.  Doubt me if you will, but I can back this up with multiple witnesses.

If I had to guess my age, it would be around ten.  That meant I was likely hip deep in the original Star Wars and planning my eventual move to Tatooine once I could get Mark Hamill’s phone number.

St. Alphonse is a small rural community with a population of about fifty seniors and a transient racoon.  To this day, on a hill overlooking the town valley is a large white cross.  As a child I remember it being a thousand feet tall, but in reality it’s likely about fifty.  If for some reason your GPS has had a critical malfunction and you end up driving out there, look to a hill north of the town.  You can’t miss it.

This was the first time I had ever seen it and I was transfixed on it.  I don’t get many compulsions in life beyond an overwhelming urge to eat the last French fry.  But I do remember having a deep need to get up close and personal to that cross.

“What is it?” she asks, likely wondering if had seen a deer or needed to stop and water the daisies.

“There’s a big cross on that hill.”

She smiles.  “It watches over the town.”  Mom always had a poetic view of the world.

Looking back on historical records, the cross was constructed in 1983, so it couldn’t have been more than a few months old when I saw it.  The large wooden cross is encased in a thick metal housing.  It sits on a hill with mature trees mixed with open spaces.  The whole scenery is especially inviting.

Mom always was encouraging of any spiritual matters, as she wanted very much that none of her kids became axe-murderers.  If we could just avoid a felony conviction, she could maintain bragging rights in the community.  So she slows down to humor the twerp in the backseat.  My siblings tolerated it because I was bigger and had a foul disposition if slighted.

Outside my window I studied it.  It was frustrating in a way, to see something so close but be unable to touch.  I examined the terrain and concluded that surely we could make our way up the hill.

Bless her soul, Mom pulled the car over to the side of the road.  The entire family then made our way up a relatively steep hill.  Mom tells me they have since built a road behind it for easier access, but this was the way it was.

While the area is very sparsely populated, it is also drop-dead gorgeous to explore.  It likely only took twenty minutes to make it to the top.  Keep in mind, big hills in southern Manitoba are not exactly Everest.  But there it was.  Before me stood the giant cross.  The white metal base and dark stained wood created a captivating visual against the maple and poplar trees it looked down on.

And that day, it was looking down on me.

My other siblings ran around the hill like rabbits on crystal meth, happy to be free from the confines of the small car.  I’ll imagine there wasn’t a calf in the trunk just so I can sleep better at night.  And while none of them gave the cross much thought, I had a different reaction.  Too young to even process what I was seeing or doing, I stood there and stared at this gigantic piece of wood.

With hesitation, I reached out to touch it.  Should I?  Keep in mind, there’s a certain protocol in Catholic tradition, and as such I wanted to make sure I wasn’t breaking the “don’t touch crosses on hills” rule.  Fairly certain a nun wasn’t going to leap from the shadows and bushwhack me, I placed my hand on the thick metal base and looked up at the horizontal wood beam.  In a way it felt like I was home, and I was being invited in.

I’d like to say an angel appeared and told me to take up arms against the English king, but no such drama took place.  I instead had accomplished my goal, and in typical ten-year-old fashion, was done now.

“Ok, we can go.”  Unceremoniously, we slowly made our way down the hill and back to the car.  Whatever childhood desire I had, it was satisfied by standing at the foot of that cross looking down on St. Alphonse.  My mother just followed, silently contemplating what had transpired, but satisfied this kid wasn’t going to be an axe-murderer.

It would be half a lifetime before I returned.