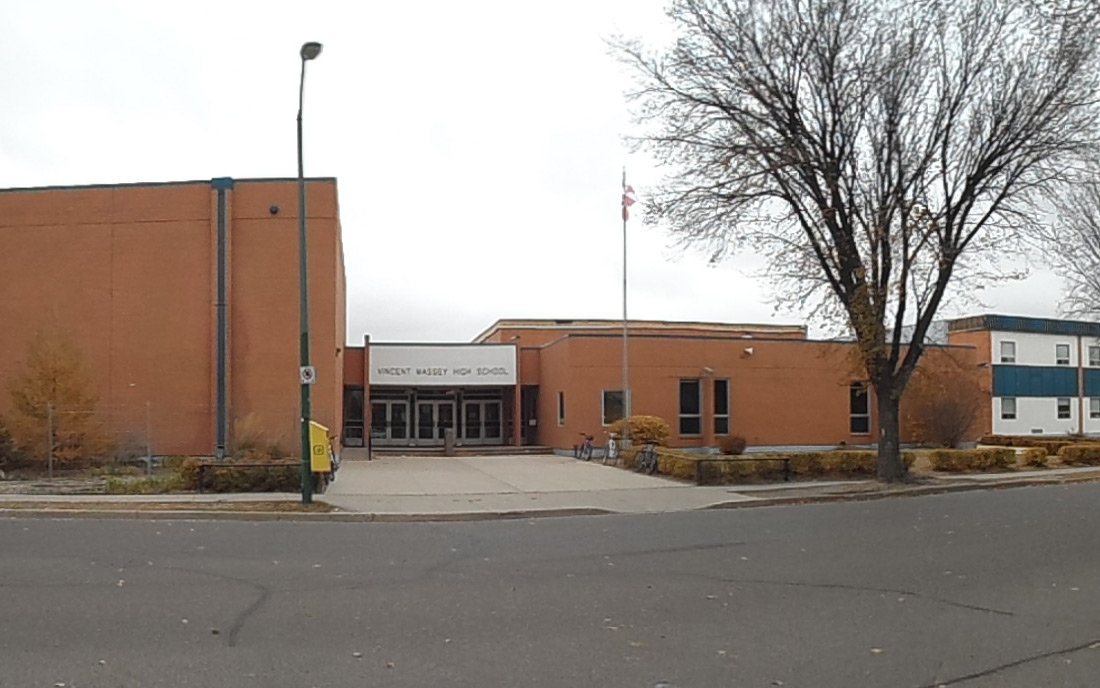 “You better watch out,
‘Cause I’m back in the game.”
– Airbourne

If one were to discover an old yearbook from 1987, they would see a version of me radically different from 1988.  The small town picture showed me for what I was; beaten and miserable.  I had a stunned expression like a caged rat.

However, the following picture from my first year at Vincent Massey High?  Not even the same guy.  I appeared bright-eyed and ready to conquer the world.  Thanks to my sisters wedding makeover, I wore my hair different.  I was also starting to develop more mature facial features.

Of course, new school means new friends.  I never was very good at that particular skill, but it wasn’t long before the problem took care of itself.  For example, Computer Science class.  I sat next to this big guy, Nathan.  Every now and then Nathan would lean over and punch my arm.  It was absolutely done in good humor, but after a while it was starting to piss me off.

The teacher would turn.

Bang bang, on my arm.

A while later the teacher would turn his attention elsewhere once more.

Bang bang, on my arm.

“What the eternal hell, man?”  I would say, half laughing and half wanting to pile-drive this asshole.  I then see his textbook and inside is most assuredly a comic book.  My desire to commit a homicide is overtaken by curiosity.

“What book is that?” I whisper.

He quickly passes me the book and I slide it into my textbook.  It’s some obscure comic called Ralph Snart, and it was gut-splitting funny.  I was accustomed to the seriousness of Marvel superheroes but this was just straight-up comedy.  It was all I could do not to laugh out loud.

Nathan quickly became my best friend in high school.  Quite often I would head over to his place and like a starved urchin, raid his fridge.  If fortune shone upon me, I would be on the receiving end of his mom’s Ukrainian cabbage-roll suppers.  I never knew anything in the universe could taste so magnificent.

Nathan’s family was fairly well off since his dad owned an autobody shop.  So naturally he had access to a lot of toys.  In this case, a Commodore 64 souped-up to the max, complete with a phenomenal 1200 baud modem.  He even had his own private phone line.

Back in 1988, there was no Internet.  But there was a series of dial-in sites we termed a BBS ( Bill Board System ) run by independent hobbyists.  You would dial in ( if a line was available ), hopefully connect, and then play a text-based game or download software.  If you chose the later, you committed yourself to a task that would take hours, if not overnight.  Remember…1200 baud.  Most people who owned a modem had a 300 baud, so Nathan was playing with the big boys.  There were of course, limitations to this basic form of telecommunications.  If the line got disconnected, you had to start a download over.  Being a pirate in those days took effort and a ton of patience.

Nathan’s family also had another grand feature, cable TV.  At my old farm, we had an antenna or whatever coat-hanger provided the best reception.  Through cable I was introduced to the imaginative world of science fiction.  In particular, Red Dwarf, a British low-budget comedy about a guy who is the last man in the universe.  His only companions are the ships aging computer, a hologram of his old bunkmate, an evolved cat and an eager-to-please custodial android.  There was also Doctor Who, but I never could get into that one.

But what about girls?  Well, In short order, I got what I was long asking for.  Yes, believe it or not, John got a girlfriend.  I think.  It was all rather sudden.  And as you would fully expect, I had no idea what to do with her.

Elaine was a perfectly nice girl who took a liking to me within the first two months at Vincent Massey.  She was absolutely the instigator in the relationship by asking me out for coffee and even to a Midnight Oil concert, which was pretty awesome.  She was a soft spoken brunette and I’m sure I could have been a little more clear on my intentions.  But that would have meant I would have had a clue what they were, and I wasn’t entirely self-aware yet.

Try to imagine a dog chasing a car.  That’s young guys with girls.  We chase, chase, chase and finally a car stops.  Then we just stare at the vehicle like, “ok…what now?”  That was me at this stage of life.

I think the whole “relationship” lasted a month.  In terms of being a decent boyfriend, wow…did I ever drop the ball.  Terrible communication and when I decided it was time to call it quits, I sort of just slid away without the decency of letting her know.  I simply never had any emotional investment in the whole enterprise.  Suffice to say, she could have easily done better by getting a hamster.

But I took it as a learning experience.  Clearly I was capable of getting a girlfriend.  That was a start.  Now I just had to connect with one who was more my type.  What was my type?  Well, that took a little independent study to determine.