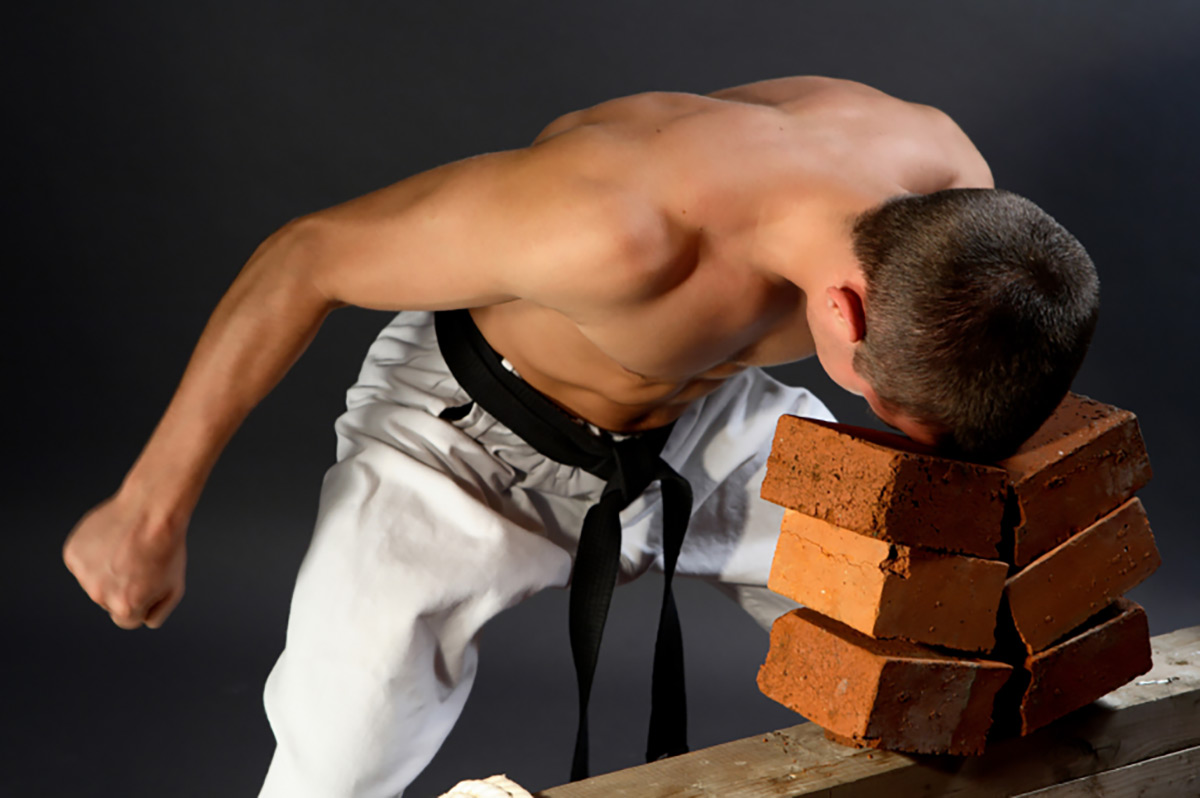 At the tender age of sixteen, I could have been a little more choosy about my role models.  Sure, Hulk Hogan was aces.  But there was only so much I could do to impersonate him besides prayers and vitamins since his bicep was bigger than my waist.  That meant I needed to seek out more relatable individuals.  Sadly, I found one that would shape the better part of the next decade of my life.

Ralph mother-porking Macchio.  For some insane reason, I had found my soul mate in the friggin’ Karate Kid.

I’m going to lay the blame for this squarely at the feet of my then eighth-grade friend, Earl.  Like me, Earl thought the best way to be the heroes of the schoolyard was to take a page from the Bruce Lee School of Interpersonal Skills.  Someone gives you a look?  Spinning back kick to the face.  Trash talks your gnarly BMX?  Five finger death claw.  Takes your lunch?  Dragon clutch to the scrotum and a fast tearing technique.  I had wondered why I had not seen life this clearly before.

Earl also had access to a remarkable technological innovation, a VHS player.  That meant we could watch Bruce Lee lay out some old-school whooping, rewind and watch it again.  Realistically, I should have gravitated towards the Dragon, but another movie drew me in like a retarded moth to a zapper.

If you’ve seen The Karate Kid, you know it’s a story about a whinny Jersey brat who moves to a new town and gets beaten down for being a total schmuck.  He gets one summer of free karate training from the Okinawan maintenance man and finally beats Cobra Kai’s top student, Johnny, in the All-Valley Tournament.

But that’s not the best part.

Daniel skinny-as-a-rail LaRusso takes down Johnny in one dramatic ( and illegal ) final move, the crane kick.  In the movie this kick appears to smash Johnny’s nose cartilage into his cranial cavity, but nobody seems to care.  If you’ve spent more than five seconds in a dojo, you know this kick is not only impractical, but leaves you incredibly open to attack.

For the record, I had not spent any seconds in a dojo.  But no matter.  I figured this move would rock the next time I was in a pinch.

Fast forward a month and young John is once again fighting in the schoolyard.  I honestly don’t know what my deal was but one should never try to make too much sense out of what happens in their teens.

Don’t mistake my occasional fighting for any level of skill.  I was dreadful.  Dare I say, laughable.  Learning karate from movies or ninjutsu from a magazine obviously has not cranked out a single UFC contender.  In one particular instance, I thought attempting this crane kick was a sure win.  The circle of spectators could hardly believe what they were seeing.  As a reward for their patronage, I gave them comic relief by loosing my balance.

Sigh, not my finest hour.

There was just no recovering from that spectacle.  In one brief shining moment, I realized that Ralph, my dearest Mr. Macchio, was a garbage role model.

From then on, I was flying solo.  Even Earl denied ever knowing me.  Women would hide in garbage cans when I walked by.  And I still got in fights because, well…I wasn’t exactly a legitimate threat.  It was abundantly clear I had no combat skills.  In fact, one might say I couldn’t fight my way out of a wet paper bag.

One Saturday morning I was watching Stampede Wrestling on the boob-tube and flipping through the Brandon newspaper.  I glanced the want ads just in case any young, hot women were looking for a skinny, angst-ridden teen to rock their world.  Nope, but I noticed an ad for a karate school at the YMCA.  Karate you say?  You mean I could learn the real thing?  It even said the first month was free!

Brandon was about a 45 minute drive west, so it wasn’t exactly a minor inconvenience to suggest I join a karate club.  But I was able to convince Mom to at least watch a demo class and we could decide after that.

We sat on the sidelines to observe and I was gob-smacked.  The Sensei would yell and everyone would punch or kick in unison.   I had never seen kata or sparring in person.  It was magic.  And the best part?  Not one crane kick.  I couldn’t wait for Mom to give them her money.

Within fifteen minutes after the class I was officially signed up at the Brandon Shotokan Karate Club.  The little Macho Man on my shoulder was yelling “Oooohhhhhh yeaaaah!  Dig it!” in anticipation.  Surely in no time I would befriend Mr. Miagi and wax-on-wax-off my way to sweet victory.  I would have more chicks crawling over me than James Dean because girls dig guys who can scream in Japanese and punch the air.  No really, Google it.

On the first day of class, all the puny white belts, myself included, met Sensei Mayombwe, who didn’t quite fit the stereotype I prepared myself for.  What I was expecting was an old Japanese dude who spoke like Yoda.  Richard was Kenyan and had such a thick Swahili accent I honestly had a hard time knowing what the hell he was ever saying.  But the nice thing about karate is the universal language of getting punched in the face.  What I remember most is that Richard had a heart of a true teacher.  He knew I was a kid who needed a little toughening up.  That, and a heck of a lot of guidance.

The thing about Richard is that the guy was a legitimate, certifiable killing machine.  He didn’t grow up in happy Canadian suburbia, but rather some pretty darn tough African neighborhoods.  Word has it he had to kill a guy in a street situation, but it’s hard to tell what is real or straight up BS when it comes to Sensei’s.  I find that a lot of martial arts masters have oddly similar mythos that follow them around.  Plus I was a gullible little twit, so who really knows.

Even though Richard was demoted to brown belt when he came to Canada due to the politics that pervade any sport, he was fully capable of taking every black-belt from Winnipeg head office and mopping the floor with them.  But the belt didn’t matter because he was a humble man who didn’t put personal value in things like that.

Sensei always had a smile, until it was time for business.  Then I would see the glaring white of his eyes and just about soil myself when he got in sparring position.  He honestly looked like he had every intention of hanging me by my own intestines.  But he was always kind hearted and knew to go easy on me.  Still there were a few times he needed to deliver a gentle nudge to help me move to the next level.

And sometimes to snap ourselves out of a bad habit, a slightly more aggressive nudge is required.