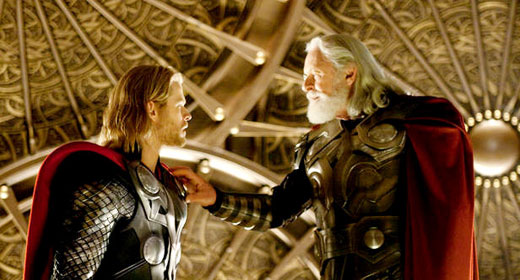 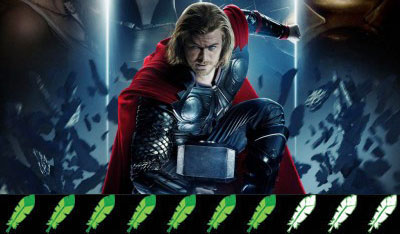 Anyone familiar with Marvel Comics is aware of Thor…the Norse God of Ambiguously gay spandex.  Oh, and Thunder, right…thunder.

My initial take when I heard that Thor would be made into a movie was a simple one.  It would clearly suck.  How could you translate to film a hokey comic book hero who calls out evil-doers with, “I’ll have words with thee nave”?

Yet amazingly enough, they pulled it off.  And did so shockingly well.

The story takes place in a realm called Asguard which is not technically occupied by “gods” but rather an extremely advanced alien culture of whom we earthlings through story and lore have made into mythical beings.  It is about a self-righteous young punk named Thor ( Chris Hemsworth ) who loves the glory of battle and war.  Thor feels he is ready to take over from Odin ( Anthony Hopkins ), his father. Odin however is worried about his son and rightfully so.  His son is a douche.

Thor decides to rock the boat and attack the Ice Giants with whom there has been an uneasy truce.  His short sighted actions lead to war, his banishment by his father Odin, and his brother Loki to assume the throne of Asguard.

Exiled to earth he must live as a mortal.  As such he cannot reclaim his faithful hammer named Mjol…migol….mjolner… Aww screw it.  Safe to say that in all my years of reading the comic I never got the pronunciation right.  Here’s your opportunity to fix a fatal flaw in your childhood if you watch this movie. 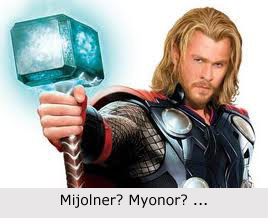 True to Hollywood fashion, every exiled god requires a human love interest. And that role belongs to Natalie Portman.  Many critics accuse her of being wasted talent in this movie and having no advantage over a cheaper actress.  I couldn’t disagree more.

First of all, Natalie’s character, Jane, needs to come off immediately as intelligent as well as beautiful.  Something that Natalie actually is and as such the audience can readily accept.  Having someone such as Rose Huntington-Whitely-WhysYourNameSoFlippingLong from Transformers 3 would have been a grotesque mess because there’s no way she’s ever going to come across as intelligent.   Yeesh, Rose barely came across as human.  That hack actress probably needs a flowchart in order to get her heels on.   The acting cake is topped with Anthony Hopkins who does a kick-butt rendition of Odin and owns every scene he’s in. 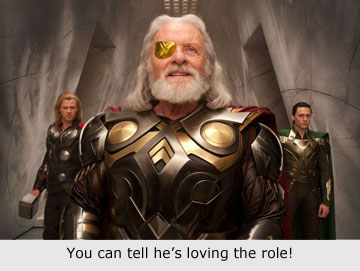 Because of the great acting talent, the chemistry immediately works between Thor and Jane.  Although to its credit the story is not about them.  It’s about Thor transforming from a selfish narcissist putz to a caring man who puts the needs of others above himself.  Only then is he worthy to reclaim his birthright.

Thor is an awesome example of redemption and self-sacrifice.  It takes a man with few redeeming qualities who has been cast from his fathers presence and ends with someone reunited with his family and his purpose.  The end leaves open the option for a sequel, although it’s hard to say if it was meant to remain open for the upcoming Avengers movie.  Either way, I’m there!

Violence:  Lots of smashing and bashing, but nothing gory.
Nudity:  none.
Language:  A didn’t catch any inappropriate language
Family Rating:  There’s a bucket-load of positive lessons to be extracted from Thor.  Plenty of fodder for family discussions.