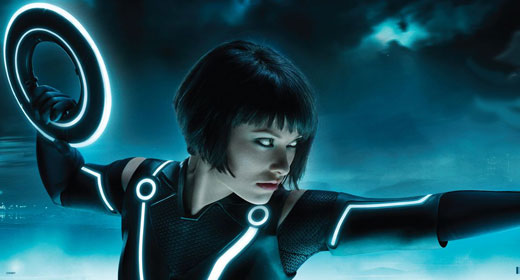 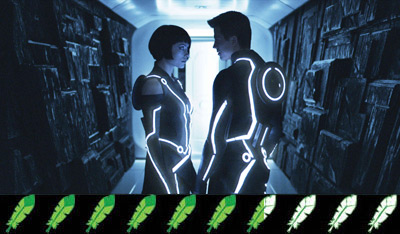 What do you get when you combine nostalgia, cool CGI, an awesome soundtrack, inconsistent acting and a whole lot of tight spandex? You get Tron Legacy kids!

I’m always an easy sell for Father/Son movies and Tron Legacy is just that. It picks up essentially where the original left off from 1982, so old fart Generation X’ers like me will enjoy it all the more. Those not familiar with the first film will still find it enjoyable, but probably not on the same level. Sadly I was unable to watch this on the bigscreen or in 3D, but was instead reduced to the misery of merely renting it. Sob…poor me.

When ENCOMM CEO Kevin Flynn ( Jeff Bridges ) goes missing, young Sam Flynn ( Garrett Hedlund ) is left to grow up without his Father.  Like his father, Sam is a technological rebel who has a unique vision for his father’s company ENCOM. But unlike his father, he has chosen not to take control and seize his destiny.

After a trip to his father’s old arcade Sam activates the devise that transports him to “The Grid” where his father has been unable to escape for all these years. From there it becomes a story of restoring a relationship as father and son fight against a rouge program, Clu, built in the image of Flynn senior. 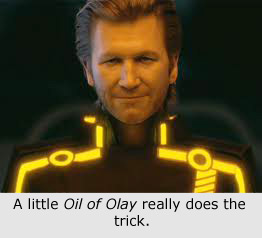 The special effects in TL are drop dead amazing, as is the perfect soundtrack by Daft Punk. Lets face it, Tron was, is, and always will be a CGI movie. The light race and the nightclub scenes show how a new style of music can bring a movie up to a whole new level. Kudos to Disney for having the cahoonahs to take this bold step instead of another tired Hans Zimmer orchestrated soundtrack. Where the CGI falls a little flat is the digitally recreated younger Flynn from both the flashback scenes and the face of Clu, and it is very noticeable on BlueRay. So much so that it might get distracting.

Where TL falls a little short is the acting. Whereas Jeff Bridges does a great job as an older Flynn who still talks in 80’s “radical” slang ( “You’re messing with my Zen thing, man!” ), Garrett Hedlund as Sam is a bit stiff and doesn’t display the broad set of emotions one would expect if instantly transported to a new world. All things considered, Sam takes it pretty well for being dropped in the middle of a mainframe, dressed down by four hot babes in glow-in-the-dark tight outfits, and then sent to the games! I think Disney was hoping to emulate Chris Pine’s “Kirk” character style in the new J.J. Abrams Star Trek but didn’t come very close to pulling it off. 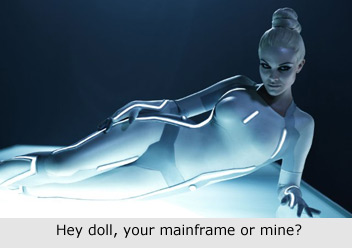 So what’s the theme? This is a story about a father and son learning about each other and ends with the son assuming the role his father had intended for him to take. In doing so, Sam Flynn crosses the threshold from adolecence to the responsibilities of being a man. There are strong undertones of pride, arrogance, regret, and sacrifice that make good object lessons if viewed by the family.

While not a perfect film by any means, it accomplishes more than its predecessor.  The movie starts off fairly strong, but I’ll admit the last act moves a bit slow. In short, it’s a popcorn movie…but not like the abysmal Transformers that will leave you questioning whether humanity should be allowed to continue.  Jeff Bridges knocks his perfomance out of the park and for the most part carries the show as his character displays the broad emotions and humor that are lacking elsewhere.  But if you can forgive certain plot holes and some brief moments of unimpressive acting, Tron Legacy is a banquet for the senses.

Violence: Lots of “programs” getting blown to digital bits.
Language: I didn’t notice any offensive language.
Nudity: Lots of skin-tight “techno outfits”, but no T & A.
Family: Some younger viewers might be bothered by the demise of “programs”. Otherwise there are some good lessons in growing up and taking responsibility for your past failures.