I’m a blogger ( obviously ).  I’m a podcaster.  And I have a special razor sharp samurai sword upon which I will impale myself should I ever join Twitter.

Some might think I’m a bit hypocritcal given that I’m already 2 out of 3.  Although in all fairness, writing blogs and podcasting helps break the insanity inducing silence of shift work where I sit on my lonely butt for nine hours at night and babysit a machine that I’m sure will one day rise against humanity.  So I guess it’s therapy so I don’t start talking to volleyballs named Wilson.

But has Twittering crossed a line?

Well, I asked some people out in the real world ( Wal-Mart cashier ) about what the big deal was.  And like a ray of wisdom shining to me from glory above, it hit.

Twitter is quite simply, the spokesperson for the “Me Generation”.  It is the ultimate tool for the budding narcissist.  It is the grand soapbox where anyone can utter complete meaninglessness, and not be summarily dragged into a back alley and beaten.  It is where Tourette Syndrome meets an open microphone.  It’s much the same as running up to a complete stranger, screaming ” I love fries with KETCHUP!!!”, and then smugly waiting for approval.

Welcome to the Attention Economy.  God have mercy on us.  We are doomed.

Jim Carrey was the breaking point.  With his Tiger Woods “tweet” comments he officially made me snap.  I understand that actors by nature are attention obsessed freaks with mental problems that would make the average person spontaneously combust.  But still, that just did it for me.

And Dear Lord, you should have seen me come undone.  Running through the office, grabbing Blackberries and throwing them to the floor, dousing innocent bystanders with hot coffee!  All the while screaming like Lawrence of Arabia charging into Aquaba!!

I guess my point is that I’m not a big Twitter fan.

I remember not that long ago watching the Apple Keynote when Supreme OverLord Steve Jobs was announcing the iPad.  The hosting site thought it would be uber-hip to include a Twitter feed.  May their bodies suffer for all eternity in SCUBA suits filled with termites.

Endless feeds of nothing. Absolute vacuous comments that might as well have been the result of heads being smashed against keyboards.

Yet still, nobody is listening.  See a pattern here? 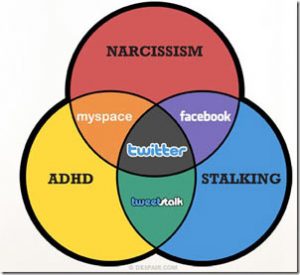