The long anticipated Part 2 of 2 has arrived.  PART 1 covered the Alpha Phase, but now it’s time to crank it up a notch, turn it up to 11, or let our balls drop…I’m really not sure if I’m saying that right but you get the point.  Alpha worked on the foundation but BETA Phase is focused on the core.  Along the way I’ll provide some tips and advice along with my partner in fitness and species procreation, Mrs. Parrot.

Some weights are the only addition required.  Nothing too heavy.  10lbs for the men and 5lbs for the ladies should do. 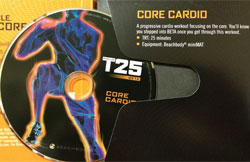 It’s Beta: Core Cardio, and you can tell because they changed the color of the lightbulb on the set to orange.  There’s lots of compound ( combo ) moves to get the gut involved like Air Plank Jumps.  The same 2.5 minute cool-down from Alpha:Cardio follows the main video.

While Core Cardio does indeed involve the core, it does not do so to a crazy degree.  Think of it as Alpha Cardio with a bit more kick to it.  That’s probably a very good thing as there is a devoted Core video the same week. 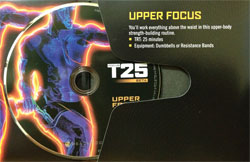 Like all things Shaun T, you’re going to sweat your butt off only this time you better get out the weights.  There are however a few things you should know.

Upper Focus is still circuit training with weights.  That means it is nothing like a dedicated muscle routine such as Body Beast.  The purpose of this is to accelerate the fat burning process by getting the muscles involved.  As such the average male would probably not need more than a couple 10lb weights.  As such the band included in the package is a good choice.  To give perspective I can do repeated sets of bicep curls at 40lbs.

The moves involve push ups, presses, curls, rows and abdominal work.  By now you should really get the impression your abs are getting stronger as hardly a workout goes by Shaun doesn’t go after them.

Hey, all this working out is fine and dandy but remember citizens, the food guide is critical for this program as realistically you will not be burning the same calorie load as Insanity: Asylum.  Therefore lets pass the mike over to the expert, Mrs. Parrot, for a brief segment I’d like to call:

Feeding my husband is an ever difficult task as his immunity to arsenic is staggering.  He also has a nasty tendency to go for seconds which is why even though he is brawny as a Kryptonian god, his abs are less defined than you would expect for someone who has a stack of workout programs.  So for T25, I have volunteered to follow the “Get it Done” Nutrition Guide and Mr. Parrot has PROMISED to follow it religiously so he can walk down the street without a shirt.  He’s a complex man, but a good provider.

The basic outline of this guide for the semi-active person is 400/200/400/200/400.  The main meals are 400 calories and two snacks at 200 for a daily total of 1600 calories.  That means the traditional “going for seconds” is out.  It also means you need to be conscious of what you eat lest you waste your calorie allotment on empty foods such as rice or pasta.  Occasional lean meats, lots of vegetables and easy on the grains describes the recipes best.

What would be handy is a calorie counter for individual ingredients, but fortunately the P90X2 guide more than makes up for that.  Mr. Parrot has not complained about feeling hungry and admits overconsumption is more a habit than a need.  In the last 2 weeks he has gained more definition and I that means I wait in front of the bathroom mirror for him to finish yelling ,” Can you FEEL the power!!?” while striking a pose a bit more often.  Men. 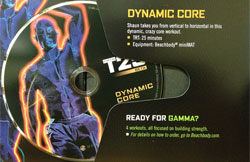 It’s a cardio gut-buster.  Dynamic Core has you moving around and then intermittently dropping to the floor to pull of some deadly abdominal work.  You’ll finish with 5-count Abs which should make your midsection spontaneously combust.

The sequence is 7 standing core exercises followed by 7 seated moves and repeating that cycle several times with a bonus round at the end.  This would best be described as a cardio core routine, and while very intense, I would also say this is also very do-able for the average home fitness beginner.   This one ranks as one of Mrs. Parrot’s favorites.

Speaking of abs: My recommendation is not to do any ab routine the day after this as your midsection will be done like dinner. 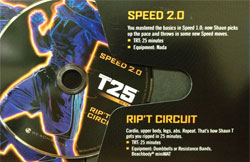 Get out the weights. Again, the average person should go for around 10lbs as this is less about concentrated reps and more for burning the muscles out. That means squats, curls, planks and pushups…the usual far you’ve come to expect from a core workout.

And make no mistake, those light weights will start to feel like boat anchors in fairly short order.  When it comes to any cardio, the best always involves weights in my opinion to activate the muscles even further.  Rip-It is a prime example of how to do it by taking the circuit training style of Upper Focus and applying it to the legs as well.

QUESTION:  When Shaun goes to pick up his dry-cleaning, do they call him Mr. T?

The first 2 rounds are done 3x with final round doing all the moves from rounds 1 and 2 three times as well.  The bonus disk, Core Speed is the same format.  This would be another disk where turning the music option to loud might help for keeping pace with the cast as keeping co-ordination and rhythm to the music will greatly determine the outcome of the workout.

Primarily, Speed 2.0 is fancy footwork with legs that never lets up.  There’s lots of hopping around that demands being light and fast on the feet.  Nothing here is crazy plyo, just steady and quick movements that start to beat the legs down rather fast.

Want to try something different?  Mrs. Parrot modified this routine on a rebounder ( mini-trampoline )! 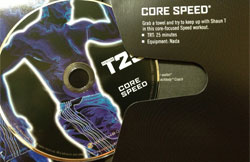 When Shaun sports the matching bright yellow shorts and shoelaces, you know you’ve just opened a box of trouble.  No joke, Core Speed will put the boots to you and I loved it with every fiber of my being!
There is some co-ordination required to get through this and Mrs. Parrot was having some difficulty even though I was ranking this as one of my all-time favorites.  In all fairness to her we are fast-tracking this review and were she to have spent the required time in the ALPHA Phase I doubt it would be an issue.  She says it is more likely because she is German and that’s also a solid argument.  I love her, but must admit her family truly has no concept of moving to the rhythm.

Like Speed 2.0, the format is 2 sequences of moves done 3 times, with a final third sequence doing both previous sequences back-to-back an additional three times ( Take a moment to digest that ).  Again, it feels like there is some Hip Hop Abs influence ( minus the metrosexual cast ) due to the music sync at times, combined with an ass-kicking dose of Insanity.  As such you may wish to choose the DVD option to play the music loud.  This is the best 25 minute beat down you will get and this one alone is 6 Feathers of out 5! 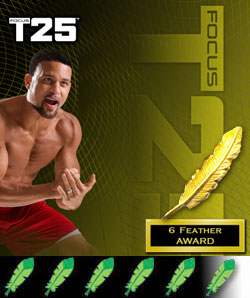 Focus T25 does what it sets out to do: give you an hours worth of butt kicking intensity condensed into 25 minutes of physical punishment.   It seems that once again Shaun T delivers the goods.

And make no mistake, Shaun T is the cornerstone of this project.  For a fitness program to get packed into 25 minutes requires solid explanations and superhuman coaching.  At no point are you left hanging, even if you struggle to keep up with the moves and for that Shaun deserves full credit.  The production values are top notch, music perfect, the intensity customizable to different skill levels, and the workouts fun.  There is nothing “cheap” about Focus T25.

But the big question is, Can this replace Asylum, Insanity or P90X?   Replace is such a harsh word.  Some days it most certainly can when you have to get your workout done in a crunch.  But in truth any decent fitness regimen requires far more than any one workout series.  Variety is key and T25 adds to that variety in wonderful ways.

So based on that, don’t pack up your P90X or Insanity and think you’re going to make it with just Focus T25.  Think of T25 as a gateway drug to longer workouts like Asylum.  Mrs. Parrot had a very irregular workout schedule and actually finds herself anticipating our next workout thanks to T25 and is looking forward to expanding her personal home workout library.

Just remember, the Food Guide is critical.  It’s not there to balance out a crooked table leg, it is there to be read and followed otherwise you can take any hopes of ripped midsections and fuh-git-about it.   No going back for seconds of Mrs. Parrot’s Coconut Curry and absolutely, positively no junk food unless you want to see your calorie allotment wasted .  But if you can pay homage to the spirit of the guide, I believe good things will happen.

This review is based on the ALPHA and BETA section of the program as GAMMA is an optional expansion pack that I will grade separately.  Nonetheless I bestow upon Focus T25 the coveted 6 Feather Award of Excellence.  Another home run for Shaun T.  Him…and his magnificent hair.