Because Gamma is optional I’m reviewing it separately to see how it stands or falls on its own merit.  So is it worth the extra cash and thus forcing you to pick beer cans in a northern Canadian ditch so your kids don’t have to eat a steady diet of Kraft Diner for a month? 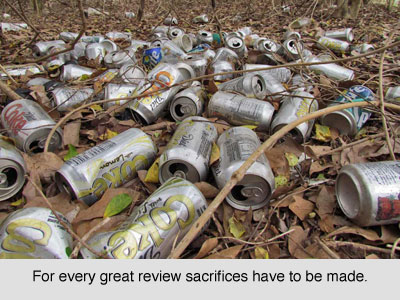 Once again, the internet will hold back the entire story from to you in the form of Beachbody Coaches whereas I while I alone am untainted by multi-level marketing.  That means I alone am not a Beachbody Coach reviewing their own product.  Thus I alone possess the answers you seek…for everything.  But you all know that.

In your heart, you’ve always known.

4 DVD’s and a calendar available in a regular or deluxe package.  The deluxe version includes a Beachbody miniMat and a couple resistance bands.  My opinion?  Don’t bother with the deluxe version unless you’re a member of the 1%.  The regular version is 3 payments of $40 which is about the maximum you’d want to part with for an expansion pack. 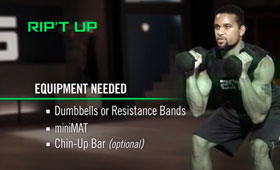 This is primarily an upper body circuit-cardio.  You’ll use light weights due to the high reps as do the cast, but I recommend using a variety as some moves are significantly easier than others.  I mean, for this I can get by with Shaun’s 20lbs bicep curls that go on forever but I’d be lucky to get past 8lbs for arm lifts in Superman position without puking up my lower back.

The 90 degree Shoulder Shrugs look simple but are an absolute nightmare but that’s ok…there’s plenty of push ups to take your mind off that agony.

The cast are not sluffing off either.  Christine has that look on her face at the end that betrays her muscles imminent failure.  I like that, because it tells me I didn’t just buy a video of happy people with perfect teeth who don’t sweat. 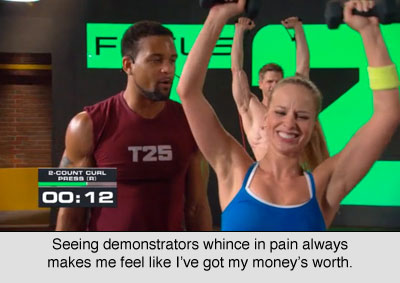 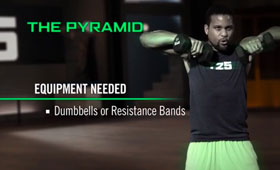 A quick warm up then you begin.  Each sequence is done anywhere from 6 to 11 times depending on whether Shaun feels you need more or less.

Again, the weights you choose will be light.  10-12lbs for the average dude and 5-8lbs for the ladies.   It’s curls, squats, push ups, upright rows, tricep presses and closing with some abdominal work.  All-in-all a good 25 minutes of solid work.

Shaun is having some real fun here messing with all our heads right from the slow counts to the comical “Awwwwww SHIznizzy!!”  It’s hard to finish a pyramid when you’re laughing.  Mrs. Parrot commented that such language alterations meant that he must have had a mother. 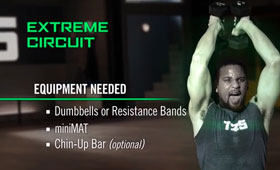 It’s like Rip’T Up in a way, but has less of a cardio focus and more slow and controlled movements.  You will also use lighter weights for more reps so choose your weapons carefully as some postures are just plain excruciating.

Want to see if you got what it takes?  Use the chin-up bar when it comes around.  Ouch.  That having been said this is a good workout but might leave you wanting at the end for a little more grit if you’re used to hour long Asylum of P90X style routines. 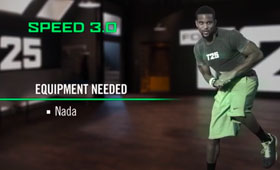 Red shoes and absolutely bitchin’ socks.  If the clothes stand out it universally means your clock is about to get cleaned.

Two rounds of 3 moves with a final round going from start to finish.  It has the same format as Speed 1 and 2 but many moves are replaced with harder ones such as much more push-up varieties.  And it is a killer!  At least in Insanity you get a water break but not here pal.  This one is on par with some Asylum routines…seriously!  You could easily substitute Speed and Agility or Insanity Cardio out for this and not loose anything.

This is listed as a free gift, although in all fairness it’s only fair to include this considering the price.  This is bar none my favorite of the batch. 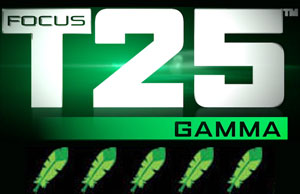 So how does FOCUS T25 GAMMA measure up with the rest of the program?  Pretty darn good I would say.  It absolutely fills a gap with some nice weight training to give that extra kick and some workouts like Speed 3.0 are as tough as Asylum.

Now…is it worth the money?  If you have Focus T25 already and the program is clicking with you then I’d say by all means go for it.  Shaun keeps bringing the intensity and Gamma will add a new and awesome dimension you your already purchased program.  This should also be viewed for what it is: an expansion pack and not a stand-alone program.  As such it has all the hallmarks of the original:  Great music, production values and of course, Shaun T.   So based on that I give it a solid 5 out of 5 Feathers for following up on the spectacular FOCUS T25 main program.

Also remember, do not spend the money on the deluxe version as there is no reason to spend twice as much to get a couple bands you may only occasionally use and a crummy mat you could get at WalMart for $10.  To be honest, using resistance bands with this program will be horribly inconvenient.  Stick with just get the disks and you’ll have everything you need.