Today we take a look back to the Jurassic period of 2009 and another “oldie” from Beachbody, RevAbs by Brett Hoebel. Trying to find a review of this online that was not tainted with the sweat of a million Beachbody Coaches was all but futile.  That’s where I come in kids.  So gird your loins and let’s see what this program can do. 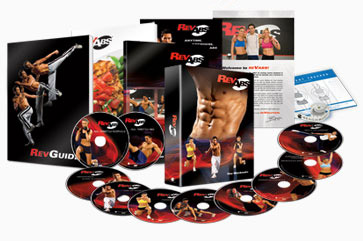 8 disks, food guide, calendar and a measuring tape you can use to adjust that infernal table leg your wife has been bothering you about.

The entry level of fitness required for RevAbs is open to just about all levels.  That’s pretty sweet for the average North American Couch Matinee who requires a starting platform that isn’t Insanity.

Most workouts are 30-45 minutes long with a few 15 minute routines which are ab specific.  The program as a whole is wisely constructed around core fitness and is a combination of high-intensity cardio and weight training.  This is a well accepted method that Beachbody has used with many programs to get the results they so often advertise.  For example, in much the same way you could buy Chalean Extreme and get pretty much the same results.  Given a choice though, I would take RevAbs any day as Chalene’s workouts are almost exclusively targeted to women.  Thankfully RevAbs has a universal appeal.

RevAbs is broken into 2 Phases, each 45 days long.  As expected the first phase might come off a bit easy for experienced fitness enthusiasts, but the second phase can be quite challenging as cardio is often combined with good old-fashioned weights to give better results.  If you want to get results and decide to try RevAbs, I believe you will be happy with your purchase.

The style of the trainer is something that is hard to describe and that is true of all of them.  Even Tony Horton can be hyper annoying at times with odd impressions.  Shaun T speaks in triple negatives and in the third person.  Brett is motivating and is obviously a nice guy…but well…let’s discuss that later.

RevAbs is one of those Beachbody programs that I get the impression, didn’t quite make it into orbit.  It has a hard time advertising itself as an extreme program as it can be relatively easy for P90X/Insanity graduates.  Plus, something like P90X can be modifiable to include the beginner so unfortunately RevAbs gets the Malachi Crunch.

Production values are a mixed bag.  The intro music to each workout sounds like a malfunctioning Nintendo and the rest is only mildly better.  Brett can also be a strange cat at times.  During each intro he kind of…what the Hell is he doing?  Acrobatics?  He then smugly looks at the camera like, “Hey, did you see that?  Wasn’t I cool just now?”

I get it, we all do quirky things.  Like when I inexplicably greet strangers with an English accent.  But perhaps backing off the machismo a few levels would help.

This was also created around the time when Beachbody was somewhat of a two man show with Tony Horton and Shaun T.  That meant if Mr. P90X and Mr. Hip Hop got hit by a stray meteorite, the company would probably have had to fold up shop.

And then there’s “The Badge”.  If you work at Wal-Mart or Home Depot and are into the prep rally thing, then maybe this will be second nature.  The rest of us will stare at the screen in awkward silence like we stumbled onto the home video of your cousin’s home birth.  “The Badge” is placing your hands to your shoulder to salute and saying the phrase, “Rev it HIGH, rev it LOW, I’m strong committed and ready to go” while avoiding your compulsion to flee.

I really wish I could have captured a picture of my wife’s face when Brett did the V-symbol and the Water-buffalo Lodge dedication at the end. Her eyes went wide like Bambi, clearly concerned that we about to be drafted into a sadistic murder-pact.

Brett has gone on to greater things such as being a trainer on The Biggest Loser, so there is no denying the man’s skills.  And while RevAbs is a decent entry/intermediate level workout program, I feel it suffers from a lack of commitment in it’s production values from Beachbody.  In many ways, Brett did the best with what has handed to him but it’s really hard to get noticed when behemoths like P90X or Insanity eclipse you with better music and far better stages.  For the current asking price of $89.95, it would be hard to want this over something more refined like Focus T25.

I do recommend RevAbs, but with a caution.  You have to have a fairly high cheese-tolerance with some of the goofy rituals.  If trainers like Tony Horton give you a migraine, Brett is probably not your guy for pain relief.