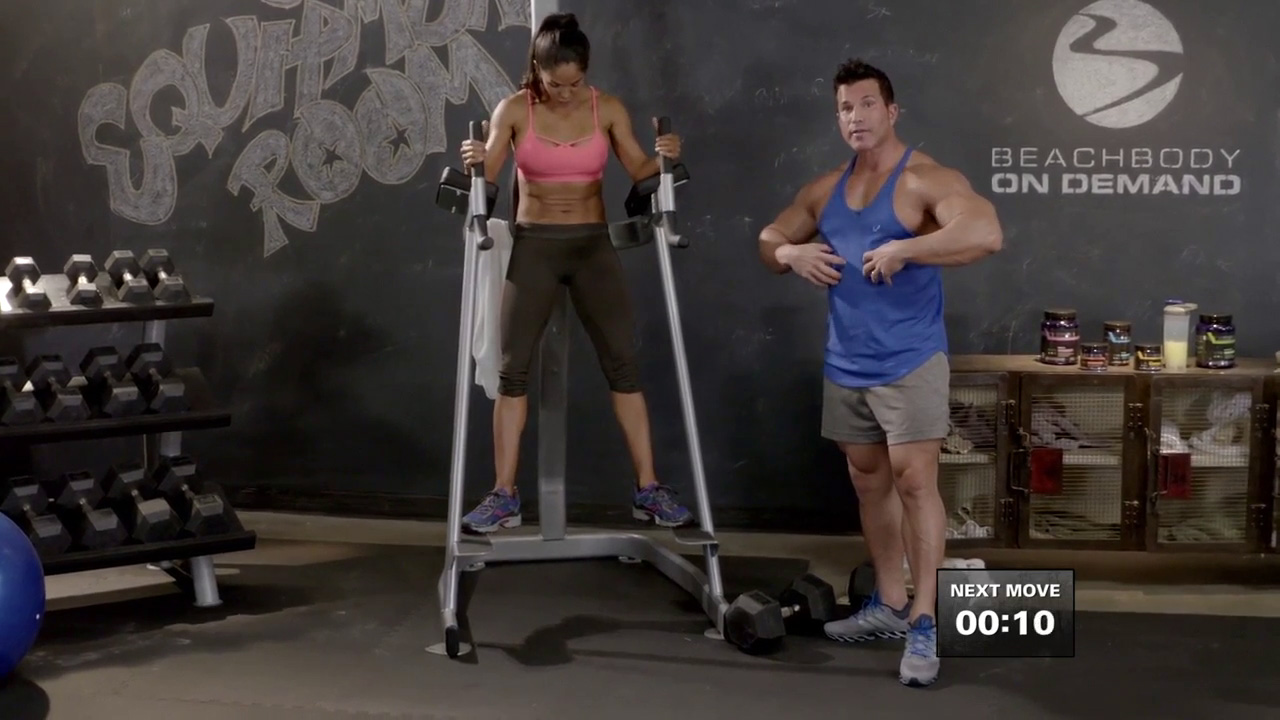 If you hunt around the Beachbody on Demand app, you occasionally find a few gems that are worth a second look.  Thankfully, Leondro’s “one-eyed-snake” fitness regimen is nowhere to be seen.  Still, I just know he tried running the idea past Carl.

The fact is I’ve always liked Sagi ever since he told me I needed to eat what was on the plane and work on getting huge canyons.  As a father of four, I also didn’t forget to breed.  Sure, the guy has his flaws such as being a bit of a dick to certain members of his Body Beast cast, but he seems to have softened as his experience has increased.  Right now if you want to focus on getting big there’s not a lot of options out there on video.  But I suppose you can to go to the gym and hope your muscle-head trainer, Mr. Ivan, doesn’t try to drop your cold-turkey backside under a 500lb bench press.

Hate to break this horrible fact, but Sagi did not get to be a cyborg-gorilla by using a set of Walmart dumb-bells.  Guys like that use real gym equipment.  So while you will get bigger doing his programs, you will not get biggest unless you buy a few toys.

This series will also show the benefits of having a good spotter.  I emphasize ‘good’ because fair-weather spotters  are a dime a dozen.  I’ve seen enough schmucks who suddenly forget you exist because Brenda walks in, sporting her new gym-pants, while Isaac Newton decides to slam a 200lb free-bar bench press into your upper body.

Access to a cable-crossover machine will really make this work for you, especially when rows and pull-downs come into play.  The one-arm-T-bar rows will require an Olympic bar or something of similar length.  I was able to cobble together a similar setup and I can see why Sagi likes this.  It works the back much better than simple rows, although you can modify to rows if need be.

The shoulders get assaulted with presses, and raises.  The lateral cable raises are a beast and demonstrate just how effective a cable machine can be.

Jan from Week of Hard Labor is the cast member today.  There’s a lot of different equipment here, from cable-crossover machine, plyo-boxes and Olympic bars.  This means you will sometimes find it hard to modify, but I guess that’s not the point of these videos anyway.

A great deal of the workout uses the cable machine for extensions.  It’s a great way to experiment with busting the legs in new ways.

Welcome to the world of Juzz ( guessing on the spelling ), Sagi’s completely bonkers demonstrator.  Sagi must have seen something in Juzz for this workout…like maybe ten pounds of crazy in a five pound bucket.  My money says the guy is juiced out of his gourd.  He gets through a set and often doesn’t know when ( or even how ) to shut up.  At one time he screams at Sagi, “You can’t fake THAT!!”.  Sagi has a look on his face that is solid gold, like he doesn’t know whether to stop the cameras or sojourn on with Yosemite Sam as his co-pilot.  If any lesson can be learned from this, it’s to never try and save on a Casting Director.

While the workout is extremely good, it will be hard to watch regularity based on the psychotic nature of Sagi’s buddy who could at any moment, start barking like a dog at an imaginary mailman.  Never go full-retard, Juzz.

Strap yourself into the roman chair as today is a core workout to beat all.  Talia is the demonstrator after Sagi threw Juzz into the Sarlacc Pit for his earlier indiscretion.

The roman chair is great for leg lifts which can work the daylights out of the hip-flexors.  Owning one of these also provides a superior option for tricep dips as well.  The other piece of equipment here is the extension bench for leg lifts and of course, extensions.

This workout feels far more developed and thought through.  There are two cast members, Talia and Fonz, to demonstrate options.  The entire flow has a cleaner polish to it.

The workout is 6 moves and 2 rounds.  It’s a full-body thirty minutes that attacks legs, back, chest, shoulders, biceps and triceps.

The preacher bench is the chosen toy today, as well as the Olympic bar.  Fonz provides the demo and is what I consider to be, the anti-Juzz.  He works hard and knows when to shut the pie-hole.  He is also clearly in a, um…natural state of mind.

This workout certainly demonstrates the benefit of having a good spotter.  With the overhead extensions, be dang sure you don’t hot-dog it or you’re going down in flames.  Unless you have the proper bench and loyal sidekick, modify to a basic french press.

It’s fun to see Sagi in something closer to his natural habitat of using professional fitness equipment.  It’s also nice for those who maybe have a better gym setup at home and want to add a little more spice than just using dumb-bells.

The idea with Equipment Room is twofold:  to use the routines for your own higher-end home-gym or to take the ideas to a real gym and apply them there.  Beachbody tends to limit equipment as not to alienate condo dwellers or those with limited resources.  It’s refreshing to see them allow Sagi to show what else is possible.

As the name implies, this is an exclusive package only available to Beachbody on Demand subscribers.  It’s a nice little addition to those of us who prefer more aggressive resistance workouts.

It’s good to see Sagi showing something closer to how he really trains.

Great to see real equipment in use

Sagi clearly is an expert in this field

Chest and Tris could use a re-shoot.

Modifying will not be easy or possible in some places.