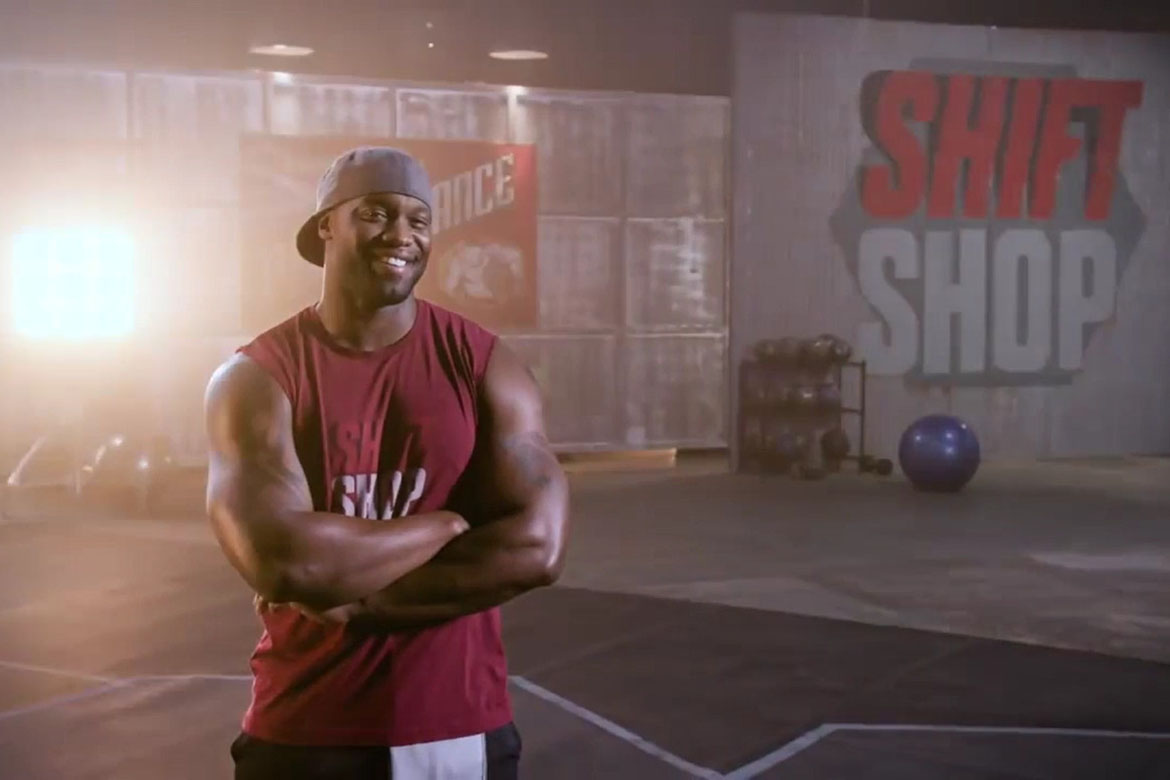 New to the Beachbody lineup is Chris Downing who makes his grand entrance with Shift Shop, a workout that is as fun to do as it is to say three times fast.

So far it’s been a good round checking out Beachbody on Demand…the camel excrement known as YouV2 notwithstanding.  Shaun Week, while a great system, still had a made for BOD feel to it.  Shift Shop looks to appeal to the online-streaming and DVD consumer alike.

I’m viewing this on BOD so all materials are online.  The floor markers are available as a printable item so absolutely go that route because at $20 US ( not including shipping ) you would have more money than brains to buy what is effectively 4 plastic plates you could get at a dollar store.

Pay specific attention to the diet guide as carb reduction is key to the success of this system which leans heavily into Paleo-diet territory.  It is split into 3 weeks:  Week one you eat good clean food.  Week two cuts back the starch and increases proteins.  Week three is starch/legume free and your odds of committing a violent felony increase exponentially.

Immediately the set and style hearkens back to Asylum days with having to put markers on the ground in lieu of an agility ladder.  The set too has a track and field vibe to it but the similarities with Asylum don’t go much beyond that.

SS kicks off with a general potpourri of running, slide stepping, crawls and mountain climbers.  No repetition of moves and each one lasts for 60 seconds.  None of the motions are particularly inspired and should be within the skill set of most people.  I would put the difficulty level of this one on par with T25 Alpha Cardio or Hard Corps Cardio 2.

Take care of what you choose for a weight as each move goes for a solid minute.  This goes from top to bottom with push ups, squats, rows, curls, planks…yup, total body folks.  As such this had a very 22 Minute Hard Corps vibe to it.  Be prepared for a cardio workout as a sweet byproduct.  Chris makes a comical reference to his calves and how the make him look like SpongeBob.  All things considered, he’s probably got little to worry about.

For week two we begin to add some intensity and move from one round to two.  Also, the two markers on the floor are increased to three.

Keep in mind that there is also some behind the scenes action going on with your decreased carbohydrate intake, so the fact that this might not be up to Max 30 standards is probably a good thing.  Dropping carbs when you’re accustomed to higher levels can turn one into a raving nut-job during transition.  I already eat less carbs than normal, but even then I could stand to cut back on the occasional banana smothered in peanut butter and home-made chocolate crafted by my wife’s loving hands and…AARRRGH!!!!  Outta my way!!

Two rounds so grab a light and medium set of weights.  The first round moves are 1 minute whereas the second are 45 seconds.  They seem to want to drop weight for second round, but I would think just the opposite should be done.  Then again, I’m just a guy on the Internet.

The motions are also more complex.  Instead of just curls or squats, you now have combo moves such as Squat Curl Presses and Push-up Rows.

It is here where we begin to have what I consider to be serious workouts for the Speed series.  Speed 35 was good and 25 was well…pretty darn easy all things considered.  Now we add better plyo and more time making Speed 45 worthy of the Shift Shop mantle.

Nine 1 minute ab workouts.  I have mixed feelings about 60 second ab moves.  On one hand, it’s a goal to aspire to so that get to be the cool Dad with the six-pack at the next beach party I’ll never be invited to.  Yet on the other, I find myself conking out early and waiting for the next move as the clock ticks.

Sweet, Chris has a warm-up outfit almost as dorky as mine.  So get comfy and prepare to do a little yoga, a little stretching and have a break from the grind.

4 markers and a sandbag for a circuit cardio butt whooping that will target the chest and legs above all.  While the fast motions are hard enough, adding weight to plyo takes it to another level.  Without the weight it’s great for someone needing to modify, but with it the heart works overtime.  While the sandbag would have certain advantages, if you’re careful and creative you can get away with some common dumb-bells.

Hope you ate your Wheaties because you’re in for a long haul.

I can see how maybe having the sandbag AND some good old dumb-bells on standby would be an asset.  Weights allow for better progress tracking while the sandbag allows the opportunity to spend hard earned money on a bag of dirt.  Either way, you’re going to alternate between upper and lower for a good while.

Take everything you like about planks and crunches then add a sandbag to the mix.  Sixty second moves that will make you feel like you got sucker-punched in the gut by a rouge motorcycle.  A dumb-bell or medicine ball can substitute in a pinch if need be.

I initially assumed Shift Shop would be a more focused workout series rather than an intermediate-level total body circuit program.  As it turns out it, despite its appearance it has more in common with 22 Minute Hard Corps than Asylum; although it certainly uses ideas from both.  From a difficulty perspective it falls between the two.  That means if you’ve finished 22MHC or something equivalent yet don’t feel quite ready for a Shaun T-level ass kicking, this will fill the void nicely.

Chris is a capable trainer with an effective communication style.  Not a lot of joking like Tony, no double negatives like Shaun T and not talking about himself in the third person like Sagi.  In other words, he speaks like an articulate human being.  I rolled my eyes a few times over the “not judging you” pep-talk that I’ve been seeing pop up with increasing regularity amongst trainers.  My advice: knock it off already.  If I get to the point where I need to be treated like a Berkeley snowflake then just use your best bullet to put me out of my misery.

So, the big question: Does Shift Shop work?  Yes, it absolutely excels at total body functional fitness.  It does not however provide huge strength gains due to weights never getting past a medium range.  So if you want to be all-around strong, fit and lose weight then this will do that.  If you want to add some mass to your guns, maybe create a hybrid with heavier weight training.

Also a huge factor is the diet.  The general consensus out there is that going Paleo is probably not a bad idea…especially for a carbohydrate obsessed Western culture that would benefit by stepping away from the chips.  Shift Shop moves you into hard core territory fairly quick as by week 3 carbs are limited to fruits and vegetables only.  Even if you cannot commit to going hardcore, I would feel safe to say even a 60% reduction will transform your life ( and midsection ) all by itself.  So do what you can.

The score for Shift Shop is 4.5 Feathers out of 5.  I see this as a very promising start for Chris Downing and predict him becoming a rising star among the Beachbody roster.  Shift Shop is a solid circuit-style workout series and I would absolutely like to see Chris tackle something a bit more resistance focused with his next outing.

Shift Shop provides a complete functional fitness package for the intermediate to advanced enthusiast. The paleo-style diet plays a key role in outcome.

Despite appearances, resistance training is not primary focus.