After the gruelling training I endured in Part 1, I return to once again feed the masses with the final instalment of the Tapout XT2 review complete with Mrs. Parrot’s Food Guide Report and the dramatic conclusion that you’ve been awaiting so intensely you have no doubt been unable to sleep for days.

Although the cast uses one resistance band, I advise having a set or using some weights when necessary.  Otherwise it will be too easy where it should be hard and vice versa.  Especially with the curls and presses that involve pulse motions.

I find that many of the leg moves while effective, are needlessly complex.  Yes, as a karate veteran I understand that martial arts involves complex movements at times.  I just don’t see how that translates well to a home workout video without compromise.

The final breakdown for the time used is about 70% legs and 40% arms.  As is a recurring theme, the ladies seem to work harder than the guys.  I guess they know the camera is watching.  Mrs. Parrot informs me that it’s a woman thing.

Finishing Killer Move: Booty Blaster: move into plank, move one leg to the side and do a leg raise eight times and then follow with a pushup.  Well worth getting the hang of.  Good luck sitting down the next day.

Pros:  No smiles and a solid effort from the cast.  This one delivers on the title.

Cons:  A little more upper body would be nice given that the program as a whole already has a good leg focus.

All this workout stuff is good, but what about the other items in the package…specifically the Tapout XT2 Nutrition Guide?  Allow me to pass the mike over to the expert, Mrs. Parrot.

The Tapout XT2 Nutrition Guide is similar to many food guides in that it naturally talks about calorie limits and good foods.  However, compared to it’s predecessor that went into much more detail, this guide only has 4 pages of commentary on calorie counts and the rest is all recipe ideas.  This is no doubt because the creators of Tapout XT2 assume you also have the food guide from the original Tapout XT.

There are some foods in the original guide that would only find their way into my kitchen if they were planted by corrupt FBI agents.  Having items like cream cheese, turkey bacon, or veggie burgers ( little more than garbage themselves ) on a “DO” list is perhaps setting the bar a little low and making it difficult to have a meal portion that is anything more than miniscule.  Better to clean things up and not waste your precious calorie limit on fluff.  The recipe ideas in the XT2 Nutrition guide appear to clean things up a bit.

The key to calorie limiting is not to waste your allotment on useless stuff like whole wheat buns and cheeses.  Portions too small will have Mr. Parrot clawing through the fridge in search of more calories that the big dope doesn’t need.  The man costs me enough as it is to feed.

So, are you saying I’m going to puke after this?   I’m unable to resist such a challenge as a dare of this magnitude is almost as disturbing as it is strangely appealing. 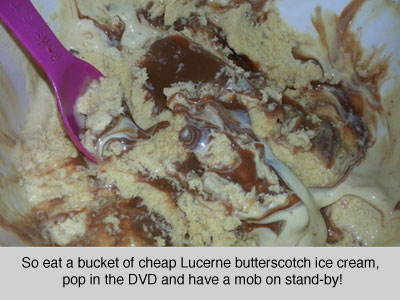 I thought this was going to be cardio, but it is actually closer to a legs/shoulder burnout with a consistent emphasis on core.  Constant use of the medicine ball is also in play and the moves are neither too complex nor too easy.  Dare I say, Mike found the sweet spot with this one.  The cast does a good job and make no mistake, this will burn you out.

With push ups galore, squats flying and a solid use of the ball you’ll take more abuse than Lindsay Lohan’s ankle monitor.  This has a very “Asylum” feel to it.

Finishing Killer Move:  Menson Hop:  A lateral tuck/power jump and then drop to a sprawl.  Then shut your face and do it for a minute and a half.  I made it thirty seconds.  Nuts.

Cons:  The infernal music.  On several occasions it just flat out stops while waiting for the next track which left me wondering if the DVD failed.  A recurring theme with Tapout XT2.

Pretty hard to screw up an abs workout.  Throw in a medicine ball and I would add it is impossible.

Mrs. Parrot took notice of the bearded dude in front ( also named Mike I believe ).  She figured he must live in the wilderness and hunt for fish with his teeth.  Nonetheless, it’s crunches and twists which is standard fare for any abdominal routine.  Hard to say much more about this one.

Finishing Killer Move:  The Carver: Tucks, then legs go left and arms go right with ball.  Damn it, some of this stuff is a little hard to describe.

Pros: Heavy use of medicine ball guarantees a gut buster.

So what exactly is Flex XT?  From what I can tell it is another workout along the same vein as Total Body XT only with different moves.  That means squats, ab-work, cardio and very creative push ups.  This workout is also only available in the Deluxe package and hosts a couple Special Forces guys in the cast, Shawn and John.  I’ve never been entirely impressed with the “spare tire” physique of a lot of MMA guys ( no…I’m not saying they’re pussies, so cool it in the comment section! ), but these two dudes are the real deal.

The tools of the day will be the medicine ball and the resistance band and both will be used heavily.  There is however a bit of a catch.  While this works you out in a good way, it does not burn you out.  My chest and legs still had more in them and I was kind of disappointed this wasn’t more aggressive on the muscles.  This is more effective as a cardio/calorie burn workout, but I don’t think it will cut the mustard in the strength department.  That might be due to a lot of moves being needlessly complex, and as such the focus on muscle development suffers.  Flex XT is a good workout that has you sweating, but still…it could have been more.

Finishing Killer Move:  Tractor Tire/Monster Tire.  Gerald co-demos and the dude is in pretty dang good shape as well as very co-ordinated.  The complexity of this might take a moment to get the hang of but that seems to be how this workout package as a whole operates a lot of times.  Also, go easy on the bands if you want to get past five reps.

Pros:  No compromise total body circuit that makes great use of bands.  Push up varieties are effective yet fun.  As cardio it does well.

Cons:  When I think Flex, I think strength.  Again, this is really cardio.  As a bonus DVD, you don’t really need it so don’t run out and buy it.  Careful doing the speed upright rows with weights there guys.  The margin of error in smashing the testicles into pâté is pretty slim. 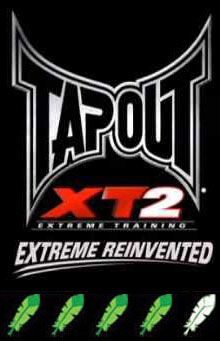 Tapout XT2 is a hard as nails workout that deserves credit for indeed upping the ante.  The trainer Mike Karpenko is enthusiastic, clearly knowledgable and seems able to ride the fine line between coach and commentator without falling into the trap of trying to imitate the joking style of Tony Horton which even for Tony can get a little thick sometimes.

The amazing benefits of the program also mean there are some deficiencies.  Strength training for example, is really non-existent.  Sure there are push ups and squats, but no real resistance training days that isolate the muscles.  Like Insanity, this is primarily a cardio-core fitness package which does indeed deliver on that level.  But this is merely the style of Tapout XT2.  The main issues are what I need to knock a feather off the rating for as they are glaring.

I’ve said it before but it bears repeating that the music is pretty second rate and feels like it was made on Garageband.  I prefer the way Beachbody does music by adding it in after the filming to maintain the mood of the moment.  Here it was clearly made prior to the filming and added afterwards which results in no real connection to the workout tempo.  Not a major complaint, but it might irritate some when the audio drops in the middle of a set.

The cast also ranges from skilled to downright incompetent and that only tells me the big names were brought in just for name-brand recognition without having ever done the program.  Seriously, many of the “superstars” can barely skip a damn rope.  I would have assumed that was basic MMA Training 101 stuff.  These guys may be killers in the ring, but if they haven’t done the program I see no point in them being on the film set.

Regardless of these issues, Tapout XT2 is a solid workout package that requires previous skill in either Tapout XT or other brands such as P90X, Insanity or Asylum.  I would not recommend it for people going cold turkey into a training program and the creators of this insist on that as well.  If the idea of giving it your all in a workout with MMA flavor which also has many familiar faces from the sport ( I have no idea who any of these people are ) appeals to you, then you may want to give Tapout XT2 a look.  4 Feathers out of 5.