About five hours in we hit the bustling metropolis of Regina, Saskatchewan.  It reminded me of Winnipeg without all the high-class that frozen hellscape is known for.  If you ever get a chance to visit Regina, enhance the experience by purchasing a blindfold from their thoughtful tourist bureau.  Be warned that there’s also a time-warp on the Trans-Canada Highway that adds 2 hours to the trip due to intense boredom.  I swear, it’s not the same tree every ten minutes.  Just seems like it is.

Soon afterwards we hit Moose Jaw and then on the horizon, I saw a lone, very large chapel.  I knew I wanted to check this place out, and we needed a rest anyway.  I grab the CB radio and call out to Jake.

“Pope John to Gangsta.  Making a pit-stop in Caronport.  Over.” 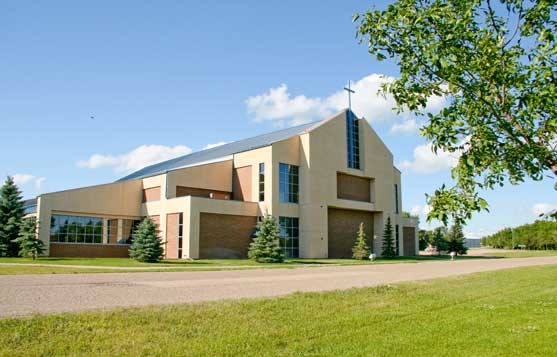 We pull in at the gas station and I get out for a walk.  Jake is less enthusiastic about the delay but I assure him it’s a great opportunity to stretch the legs.  I ask for just half an hour to wander off and suggest he either join me or use the time to make recompense for his many sins.  He instead chooses to take a nap.  Give me an inch and I’ll take a mile; I probably went a little overtime.

There wasn’t a lot of people wandering the campus center as I surveyed the surroundings, since classes were no doubt in session.  Different buildings house students, cafeteria, or lecture halls.  Weird…there’s something about this place that feels familiar, like I’m connected to it somehow.  I imagined this is what Luke Skywalker felt when he crash-landed on Dagobah.  Eventually I find my way into the student bookstore.

A wave of regret washed over me and for a brief, shining moment, I thought maybe I could try not being an asshole for five minutes.  Maybe Celeste deserved an apology after all.  I felt like I owed her something for at least being a friend to me, even if it ended in disaster.

If I possessed better judgement, I probably should have just left.  But I didn’t, so I sparked up a conversation.  “If I wanted to find someone on campus, how would I go about that?”  She offers to make a call to someone who I guess knew where to get ahold of her.

“Can I ask who is looking for her?”

If I gave my name, I suspected she likely wouldn’t show.  Hell, I wouldn’t.  So I put on my smiling poker face and made it seem like I was a long lost relative.  “Say its and old friend.  It’s a surprise.”

She buys it and instructs me to wait in the main foyer.  When class breaks in the next five minutes, she’ll either be there or she won’t.

The bell goes and students move around, heading to their next class.  I stand in the main courtyard, trying not to get caught up in the undertow of traffic.  I get a few looks, as I didn’t fit the profile by sporting long black hair, five-o’clock shadow, a gold earring and torn jean jacket.  Then I turn and Celeste is standing right there, not ten feet away.

“Hi John.”  The tone would best be described as lukewarm.  That was fair.  I’m amazed she didn’t bolt at the first sight of me.

I stammer, feeling guilty and trying to explain myself.  “We were on our way to Alberta and it was on the way and…I just wanted to…see this place.”  Clearly, apologizing was not a highly developed skill I possessed.

“…Ok.”  Oh well, you couldn’t ever accuse me of picking up signals.

I comment on how the place looks nice and ask if she’s doing ok.  The conversation didn’t pack a lot of syllables.

“Yes.”  She takes a moment before continuing.  “So, what’s in Alberta?”

Not a lot of reaction.  “That’s just a line from The Wizard…”

“…of Oz.  Yes, I know.”  There’s was elephant in the room neither of us were going to address.  She shows me the main chapel and it is seriously impressive.  I don’t know how else to describe it, but it felt like home.

“This is huge.  How many students does this place…hey, are you skipping class?”

I was having one heck of a time reading her expression.  It’s almost a subdued sadness.  Concern?  Disappointment?  Probably all of the above.

“I understand.  Seriously, thanks for the tour.  I um…left Junior Mint asleep at the gas station, so he’s probably wondering what happened to me.”

She’s about to go, but I speak again to stop her.  “Wait…I just wanted to tell you that…”

She looks at me, maybe hoping I could rise to the challenge, nut-up. and admit I acted like a horses ass.  And for a split second I thought I could do it.  But I froze.

“…that you should have fun.”

Have fun??  Instead of apologizing I said to have fun??

If there was any patience left in her, I was testing it to be sure.  But she looks me with worried eyes and gives one last piece of advice.  Something that stuck to me like glue for months afterwards.

Gotta be honest, her tone of voice was not bristling with a lot of confidence towards yours truly.  I mean, just what the heck was that supposed to mean?  Was she worried I might do something stupid?  Come on, this was me we’re talking about here.  I begin to speak, but momentarily stall as I didn’t know quite how to respond to that request.  I defaulted to safe-mode.

We stand for a moment, then she turns to walk to her class.  She disappears and I remain in the entrance to the chapel to take in the last few moments of this place.  I’d like more time, but I’ve already far exceeded my quota.

I get back to the parking lot and Jake is out like a light.  Being an awesome friend, I bang on his window like the insensitive jerk I was.  “Rise and shine, sleepy-head.  Time to go.”

He looks at his watch.  “You said half an hour!  Were they sacrificing goats?”

“We only do that on Sunday’s.”

He takes a moment to get out and stretch.  “Run into anyone?”

I look back at the campus, taking a deep sigh.

He breaks out the map, as this was very much pre-GPS days.  Soon we had to stop for the night before the big push in the morning.

It’s a few more hours, but it puts us in good shape for the next day.  “Alright, Swift Current it is.  I’ll take the lead.”  And with that we rolled out of Caronport to continue our voyage west.

NEXT – Chapter 41: The Layover