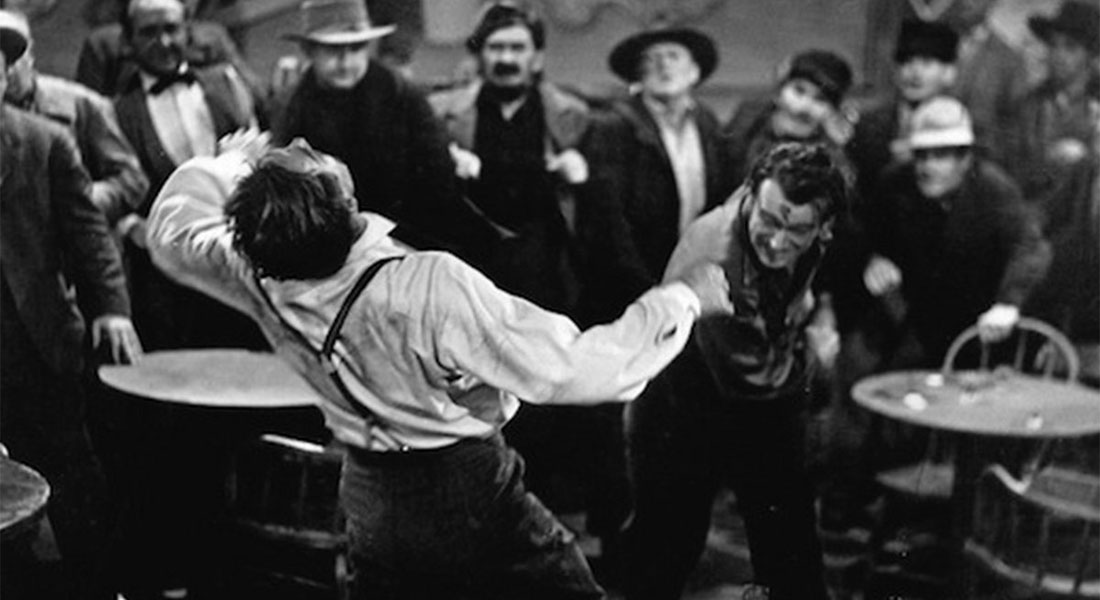 “And the girl in the corner said: ‘Boy, I wanna warn ya’
It’ll turn into a ballroom blitz.”
– Sweet

Pack-a-Day Tom was semi-eager to get back into the dating game while I was apparently spending my time avoiding it like it was a moldy anthrax sandwich left on a radiator.  I simply didn’t care for the class of available clientele at mountain resorts.

As a garden variety heathen, Tom’s only requirements were breasts and a heartbeat.  So when he asked if I wanted to attend a night-club in Lake Louise to check out babes, I agreed on the understanding I was only there as a wingman.  How he managed to convince me is another one of life’s mysteries.

It was what you would expect; a room full of hormones, loud music and booze.  Dance clubs were never my thing and the sooner we left the better as far as I was concerned.  So while me and Pack-a-Day Tom were sitting at the table I look onto the dance floor and my heart just stops.

Twenty feet in front of me I thought I saw Celeste, as some girl had more than a passing resemblance.  Seriously, for a fraction of a second I thought she tracked me down or something.  Then I just stare as she’s dancing with some guy.  I give a glance to the sky and wonder if everyone up there is having fun with this.

I take a sip of swill and smile back.  I’d beaten that dead horse enough and didn’t feel a need to discuss it further.  Still, she was a close look-alike.  Not a doppelganger by any means, but equivalent to a decent B-grade Elvis impersonator compared to the King.  Certainly enough that I was taking more than a few glances.  More-so when who I can only assume was her boyfriend, sat at a table close to us.

As with many bar encounters, molehills can get turned into mountains in the blink of an eye.  Her champion noticed my curious looks and figured I was low-risk enough to demonstrate his manhood to the young maiden.  He gets up and walks into my personal space.  I’m somewhat taken back as to what the heck is going on.

“Stop looking at her.”

Surely this gentleman will understand my rational explanation.  “Sorry.  She just looked like someon…”

“You looking for trouble?”

The correct answer to this question in a bar is “no, and let me buy you a drink”.  Obi Wan did it, and with the exception of slicing a guy’s arm off with a lightsaber, it went pretty well.  Unfortunately, a cocktail of very complicated emotions came over me and I was, for a brief moment, back at the dance where Celeste gutted me like a Thanksgiving turkey.  Once again I was small and unworthy.  But more than that…

…I felt a compulsion to enact glorious retribution.

In the heat of the moment combined with a flashback, I did the most full-retard action imaginable.  I put every ounce of emotional baggage into one, solid uppercut right into his solar plexus. 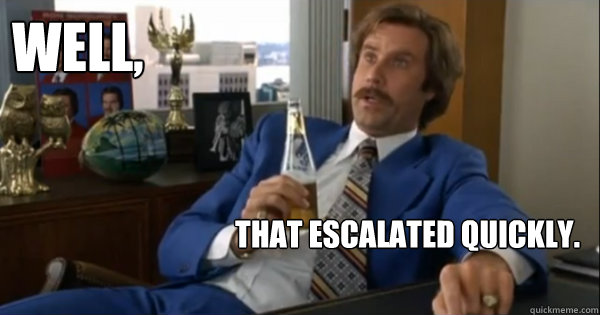 Yes, I punched the guy.  In front of his girl.  Oh, and in front his friends.  Friends who were all going to be very, very angry at this scrawny Manitoba punk.  Me?  I’m a deer on the highway, motionless and too stupid to comprehend what has just happened.

Freeze the player.  We need to take a snapshot before this mess unfolds.

I’m nineteen, 5’11, probably 160lbs soaking wet, and have yet to discover the wonders of a gym.  I was a brown belt in karate which means nothing in actual combat.  Suffice to say, I was in no way bar-room brawling material.  My counterpart, Pack-a-Day Tom, was 5’10”, skinny as a meth-head, and had a higher chance of being used as a prop in a fight than being an actual combatant.

The victim of my misguided assault, while not a large man, was still maybe twenty pounds heavier and most of that muscle. This would not be pretty.

Ok, press play.  A lot is going to happen in the next eight seconds.

He drops as my lucky ( and boy, do I ever mean lucky ) shot lands dead on target, winding him.  He goes to his knees for a moment, but when he gets back up I’m gonna be deader than a chicken fried alligator.

I’m running on killer instinct and momentarily oblivious to what I have done.  No, it’s more than that.  I’m on top of the world!  The initial stages of a solid revenge-boner are happening and it feels friggin’ fantastic.  This low-life dirtbag never deserved Celeste and …wait …what??

“Celeste” at the next table has acquired one doozy of a potty mouth.  Ok, hold the dang phone, idiot.  That is not Celeste…

…and this guy I just bushwhacked is not Dante.

Tom is choking on his beer.

I step back, suddenly aware that I am in the here and now.  That also means I’m outnumbered, outgunned and have royally screwed up.  Revenge-boner switches to emergency shutdown mode to conserve auxiliary power.

Tom, still blowing beer out his nose, is already making his way towards the exit.

I have just bought myself a box of trouble.  Hit the music.

While I had the preemptive upper hand, there was no way I was going to avoid being a human pretzel when this dude got to his feet.  The music is blaring, this chick is dropping more f-bombs at me than Andrew Dice Clay, and Igor is about two seconds from taking me out of the game of life.

I didn’t need to gather Tom as he was already halfway to the exit.  The place was packed so I quickly ran into the crowd to avoid detection and then proceeded to act natural.  Walk slowly, and maybe anyone who didn’t see the altercation would notice.  The low lighting, thumping music and body count all helped to mask my tracks.  Getting closer to the door…

I smile at the bouncers, Hogan and the Ultimate Warrior, as I slip through the exit.  They know something is up but are trying to find the guy in all the chaos.  It couldn’t be me though, no sir.  A broomstick like me didn’t fit the troublemaker profile.  Just a few more seconds and I’m…

Whether that “hey!” was meant for me I’ll never know, but I wasn’t going to hang around to find out.  Being a lightweight, I had one tactical advantage; I could run like a Kryptonian gazelle.  And let me tell you, I sprinted like the game was tied and I was stealing home base.  Tom, that little drug addict, was fast-walking to his car ahead of me as I blasted by him.

“Stick around…”, I yelled as I flew by.  I figured there was a 50/50 chance he would wait for me, but considering how lucky I was up to now due to not being dead, it was a good day to place my bet.  If not, I had a five kilometer walk back to the apartment.  Uphill.  In the Rocky Mountains.  In the dead of winter.

Once I got far enough ahead to insure I was not being pursued, I slowed my engines to sub-light speed.  I was either going to stop, pass out, puke, or do a combination of all three.  With adrenalin reserves depleted, I dropped to the ground in exhaustion.  It was just me now under the street lights of Lake Louise.  My rapid, warm breathing fogged up the air around me as my brain was trying desperately to make sense of the last ten minutes.

Finally, in the quiet of a winter night, I had a moment to absorb the absolute stupidity of my actions.  A chick living rent-free in my head had prompted me to almost get my backside slaughtered in some godforsaken mountain night-club.  Snowflakes fell on my face under a lonely street light.  I wanted to cry, but didn’t have any energy left for tears.

I pulled the hood over my head and made my way…slowly…back to the parking lot, feeling like a complete fool every step of the way.  Thankfully, Pack-a-Day Tom sat in a warm, running car.

I tapped on the door, and got in.  There wasn’t a whole lot I was in the mood to say as Tom put it in gear and got us out of there.

“What did that guy say to you?”,  Tom inquires.  While he saw the incident, the ambient club noise was so loud he was unable to hear it.  “And who the f— was the chick?”

I was too embarrassed to admit the truth of what I had done.  That I allowed a juvenile hang-up from months ago to prompt me into smoking some guy because he unintentionally re-enacted five emasculating minutes from recent past.  I was a certifiable mental bag of smashed hammers.

Tom ain’t buying it.  “I don’t care if he insulted the Virgin Mary, don’t you ever f—ing do that again.”

I sat with my mouth shut, truly ashamed.  Me, the clean-cut Christian Boy Scout was being torn to shreds by a guy who rolled joints from Bible pages.  But I took it, because I knew I deserved it.

“Better f—ing not.  I don’t know what’s happening inside that head of yours, but get your s—t together.”

Tom was a druggy, a drunk and a washout.  And he was also perfectly right.  I was better than this and it was high time I acted like it.