Sad to say, the original review for P90X on this site was pretty unimpressive as it was back in the day I never really did workout reviews.  Not now baby.  Today DysfunctionalParrot.com is the premiere source for home fitness video reviews and thanks to you all I did not have to get my hands dirty with multi-level marketing to do it. 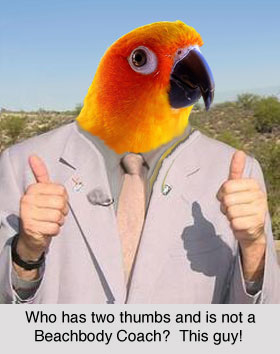 Now that I’m done self- congratulating myself, it’s time to break down the P90X system and see how each workout holds up ten years later.  At last…the review that was always meant to be.  For your benefit, every workout program mentioned here is also reviewed on this site and I have peppered the links throughout this review.

Yep, even ten years later I have yet to see one top the original Chest and Back.  It’s two rounds of 12 moves alternating between pull ups and push ups.  This is without a doubt one of the toughest workouts in P90X and for good reason: it’s just pushing and pulling until your upper body wants to die.  Even now I still want to puke after “Heavy Pants”.  I’m not sure a workout like this can ever get old!

I highly advise getting some decent push-up bars and not the kind used in the video.  This was made before Tony created his new push-up stands ( I have the old metal ones!  Haa!!  They rock!! ).  The kind used here are very unstable as I learned on my own.  Also invest in a pull-up system that is NOT a $10 doorway bar from WalMart.  Spend a little cash on either the P90X bar or something that resembles it because you will not regret it.

You can just about trace every incarnation of plyometric videos for the past decade right back to Plyo X and for good reason.  Plyo does more to make you explosively fast than anything else.  I remember the first time I did Plyo X.  Damn near killed me and even today it still can give me a run for my money.

So how does Plyo X hold up after ten years of imitators?  Surprisingly well actually.  In fact, it stands at the top in many ways as it does not try to dilute itself with cardio, but rather focuses entirely on what you wanted in the first place…plyometrics.  Most post-Plyo X videos try to add a heavy dose of cardio which means one can have half a tank going into focused plyo moves.  This is one of the consequences of certain Insanity workouts.  Tony just keeps it pure and that’s why it still works.

Plus, it’s hard to slack off when Eric is going strong with a prosthetic leg.

Be sure to warm up those shoulders.  Maybe do it like a pterodactyl backing out of trouble… 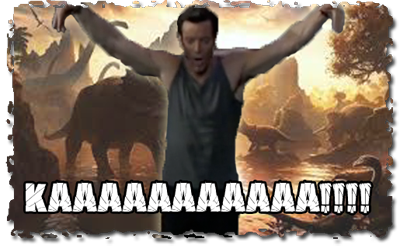 Yes, well…let’s just move past that awkward moment and continue with the review of an otherwise top notch workout.  Shoulders and Arms is about as close to a traditional weight routine as it comes.  95% of all the moves involve low reps and high weight.  Most workouts since have the opposite objective which is probably better for ladies, but us dudes want a bit of mass.  Tony shows both options so everyone comes out a winner here.

Oh yes, and don’t forget the tip of the day… 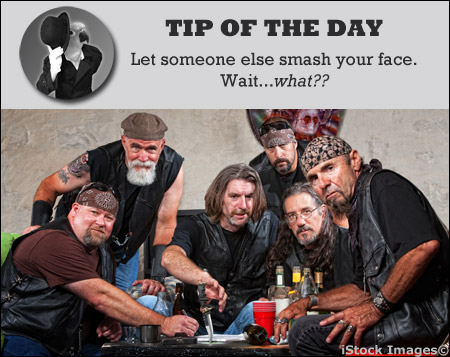 There is a lot of talk out there about Tony gushing over Drea a little thick and I suppose there is some merit to that.  I think Tony is just a flirting kind of guy and means nothing by it.  He’s Italian after all.

Alternatives: Body Beast Bulk Arms, One on One Just Arms

If moaning and bitching about Yoga X’s 90 minute runtime were currency Tony would live on a mountain of gold-plated Unobtanium.  Despite the genius behind Yoga X, it will forever be clouded by the weeping and gnashing of those who cannot look past the time on the clock.

For anyone who has sucked it up and gone the whole round, by the time it is over something wonderful happens.  An entire 90 minutes is spent focusing on something else besides work, kids, or the even the neighbourhood emergency evacuation order.  It is a truly remarkable feeling that is hard to get in only 30 or 45 minutes. 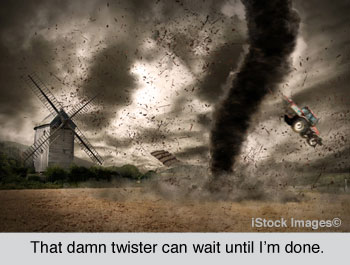 However, time is something we all must abide by and 90 minutes makes this a non-starter for many people, myself included now that my schedule includes 4 kids, trying to finish a novel and learning guitar for no justifiable reason whatsoever.  Fortunately Tony has come out with many other yoga incarnations so feel free to explore some of them.  Just don’t ignore yoga entirely lest you grow old before your time and whenever possible, go back to Yoga X. 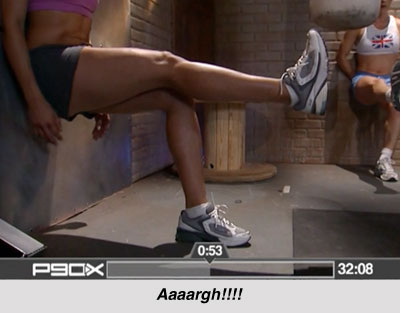 Ten years later this workout still terrifies me.  When you do repeated sets of leg presses and pull-ups you are going after 2 large muscle groups so be sure to have some kind of pre-workout drink before tackling this if you want to get the most out of it and not drop to the floor in exhaustion.

Yes, we have Katie who has been branded as the Jar Jar Binks of P90X.  But we also have Bobby Stevenson so that makes up for it.  Yes, Bobby Stevenson is the epitome of manly cool in any workout, ready to break out the 40-pounds for strip-set curls to keep up with take-a-break-Tony and be big enough to say “screw that, going for 30’s next time”.  Bobby can borrow my chain-saw, take my kids out for ice-cream and hit on my wife at the neighbourhood BBQ.  It’s cool. 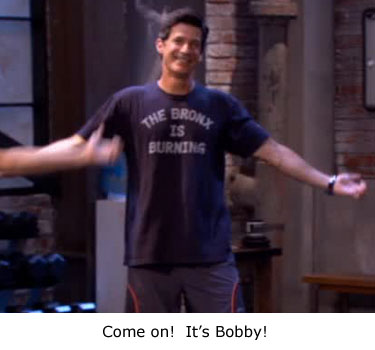 Sure, Katie treats ten basic arm curls like she just climbed Mt. Freaking Everest barefoot but if you can get past that then you will find a workout that is brutal and yet fun.  If your arms had an ass then Back and Biceps would kick it.

And no matter what the cost, I will always do 11 reps.  Not teeeeeeeeeennnn!  It’s just a matter of principle.

Alternatives:  Just Arms One on One, Body Beast Bulk Arms

Tony may have the occasional antics, but this particular crew is having none of that.  With Phil as their Frozen Golem Overlord, this cast is cold as ice.  Too early in the morning maybe?  Laura might have a case of laryngitis?  Phil lost a big court case?  Sigh…just no smiles in this video.  DP sad. 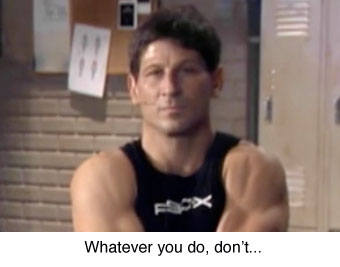 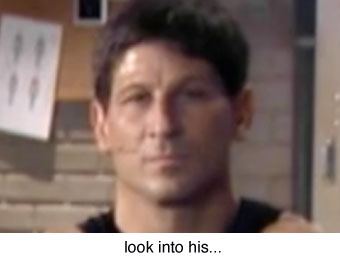 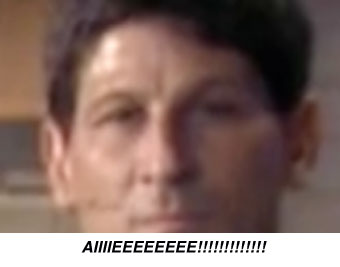 Still, this one is a killer with pushups, curls and presses.  No moves repeat so the fun stays fresh even when Phil tells Tony to get lost.  Ha!  What a comedian that Phil!

Cardio X is perfect if you’re new to fitness because it is not going to trash you so in that sense it is actually perfect.  There’s a bit of yoga to warm up, some Kenpo moves and a bit of low impact plyo.  But if you’re at all experienced with Beachbody’s other offerings then Cardio X will quickly fall to the wayside.  Even a T25 Alpha routine will kick the ever loving pants off Cardio X.  And should you be a fan of Asylum or Insanity then well…don’t bother unless you’re running a really bad hay-fever.

Co-starring Pam…and I doubt they call her Blam.  This workout is as one would expect a core assault by going after multiple muscle groups at the same time.  No exercises repeat.  It certainly seems that since this workout arrived a lot of fitness programs have seen the benefit of core routines and have followed suit.  This one requires a bit of concentration to insure core engagement and the better you get at it the harder it might seem.  That only means you’re doing it right.

This one was doomed for me from the start because I am a martial arts snob of the Tenth Degree.  I took nearly fifteen years of traditional karate taught by form-obsessed old school instructors so when Wesley does a horse stance that is practically standing up, I find myself yelling at the screen in Japanese for him to do 30 push ups and then get up and do it right. 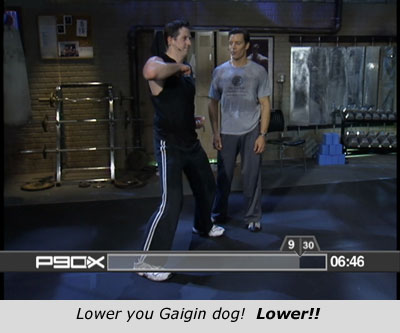 Kenpo X is what you would expect: punches, kicks and combos.  It’s pretty light on the actual cardio but might suit a beginner just starting out who needs to work on flexibility and co-ordination.  From interviews since, I gather even Tony was a bit unimpressed by the outcome of Kenpo X given that he has since revisited the idea in the P90X+ series and again in the recent P90X3 which has Alice and the rest of the cast helping out as skilled martial artists.

You hate it but you love it.  Amazing how after all these years there is hardly an ab routine out there that doesn’t borrow from this at least in part.  This one might feel a bit repetitious fairly soon but that’s not a knock against it’s quality.  In fact I would say that out of P90X/2/3 this would be the most difficult of the bunch.

Yes, even after ten years you cannot deny P90X still has the goods even when compared to a mountain of imitators that have followed in its wake.  The fact that the program has spawned so many 90 day programs is a testament to it’s successful formula.  Some of those programs are extremely good and would not have come to be otherwise.  Some are just plain awful and well…I guess that’s the way things go.

The production quality still holds up but be mindful that this was originally made for DVD and the now thankfully dead VHS format.  So don’t think you can play it on a 50 inch Panasonic HDTV and get to see the pores on Tony’s face.  This is standard non-HD format so just keep that in mind.  P90X2 and X3 have since gone the HD route.

The cast is very competent in all the videos and they really did use a test group to iron the bugs out before going in front of the cameras.  The attention to detail is incredible and this tradition has carried on for most Beachbody programs since.  In fact, it is this OCD attitude when it comes to detail that makes other programs often look like cheap shoots done in a basement.

Would I recommend this today?  You bet I would.  Although I would also mention that there are a multitude of other options available to fill some of the gaps in P90X, in particular the cardio options.  In fact, P90X is the perfect program to hybridize with practically any fitness program out there from RushFit, Asylum, UFC Fit, Body Beast, Focus T25, etc.  Interchangeability between P90X2 and X3 are of course a given.  It’s also a tip of the hat to Tony Horton who even after all these years looks practically the same!  So if you want a program that is great on its own and yet still incredibly modifiable then P90X is still holding strong even tens years later.  That’s pretty impressive when you consider how so many other programs have disappeared after a much shorter time frame.